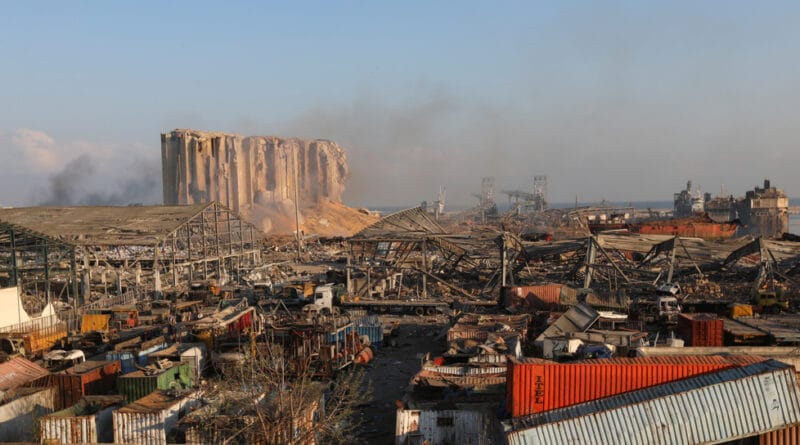 August 6, 2020.-  President Hassan Rouhani has assured his Lebanese counterpart Michel Aoun that the Iranian nation and government will spare no assistance in helping the Lebanese government and nation in the aftermath of the recent huge deadly blast that hit the port of Beirut.

In a telephone conversation with Aoun on Thursday, Rouhani offered condolences on behalf of the Iranian nation and government to Lebanon over the Tuesday explosion, the biggest to ever hit the Lebanese capital, in which the country’s main grain silo was destroyed.

So far, the blast has claimed at least 137 people and injured 5,000 others. Dozens remain missing and some 300,000 have been made homeless.

While nothing has been determined for sure, some media outlets have blamed the incident on unsafe storing away at the site of ammonium nitrate, a highly explosive material that is used as fertilizer.

“The explosion incident at the Beirut port was very saddening and woeful for Iranians too and the Iranian people share the pain of the Lebanese nation,” Rouhani said.

He assured Aoun that the Islamic Republic will rush to Lebanon’s aid whenever the Arab country demands it, and will not deny it any instance of assistance and cooperation.

The first consignment of Iranian aid supplies arrived in Beirut hours after the tragedy. Two more shipments were expected for delivery on Wednesday.

Iran’s Red Crescent Society (IRCS) spokesman Mohammad Nasiri said on Wednesday that 2,000 food packages, weighing nine tons, were set to be transferred to the crisis-hit country along with medicine and medical equipment. He added that a 22-member medical team, including general practitioners, orthopedists, anesthesiologists, operating room specialists, pediatricians, neurologists, nurses, and field hospital experts, would also to be dispatched to Lebanon later in the day.

For his part, the Lebanese head of state thanked the Islamic Republic over the sympathetic gesture, saying the Lebanese nation was “always grateful towards the Iranian nation and government for their attention and compassion.”

The history of the nations’ relations testifies to the fact that Iran has never denied Lebanon any form of support in times of need, Aoun added.

IRGC: We’ll stand by Lebanon ‘until the end’

Separately, the chief commander of Iran’s Islamic Revolution Guards Corps (IRGC), Major General Hossein Salami, affirmed that the Islamic Republic “will never leave the Lebanese people on their own in tough circumstances, and will stand by them until the end.”

Through offering humanitarian aid, Iran will help Lebanon put the aftermath of this tragedy behind it, he added.

The commander likewise condoled with Lebanon’s nation and government as well as the Lebanese resistance movement, Hezbollah, over the incident, asserting, “The Lebanese people are great stars of resistance in the Muslim world and have always dealt with such incidents through their patience and steadfastness.”

General Salami recalled recent remarks by Leader of the Islamic Revolution Ayatollah Seyyed Ali Khamenei, in which the Leader advised Lebanon’s people, government, and Hezbollah towards patience as the “key prescription” that would empower them to put the situation behind.

“We declare that all of our capacities have been mobilized to provide the Lebanese nation with relief aid and [other forms of] assistance,” the commander concluded.

Speaking to reporters in the northwestern Iranian city of Urmia, Abbas Mousavi said, “The expression of sympathy over this incident by some countries who are enemies of Lebanon is ‘diplomatic hypocrisy’ and ‘an insincere measure’.”

“Under the present sensitive circumstances, some countries have tried to muddy the waters,” Mousavi said, adding, “Those who had imposed sanctions on the Lebanese nation and government and mounted pressure on them, are now exploiting this opportunity and expressing sympathy in a hypocritical manner.”

“Of course, the Lebanese people and the free nations of the world will clearly recognize this hypocrisy and opportunistic expression of sympathy,” the Iranian spokesman said.

Mousavi added that Iran is ready to reconstruct the Beirut port, noting, “The president has issued necessary orders for the dispatch of medical and humanitarian aid to the Lebanese nation and government and all relevant state bodies have been notified of this issue.”