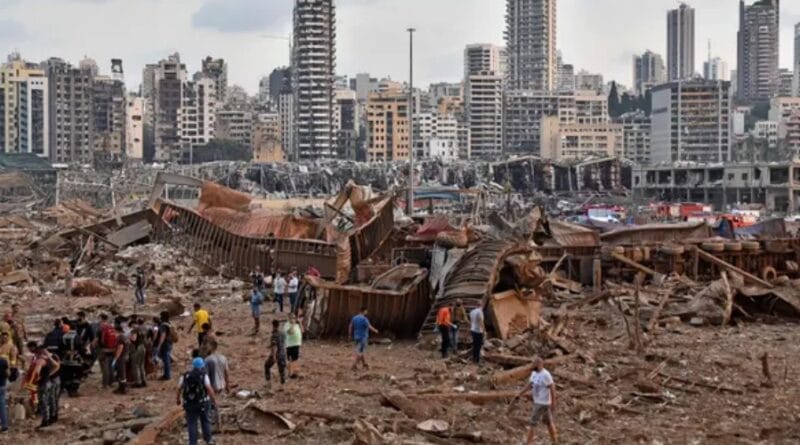 What if Trump’s remarks were taken seriously and some hothead fired retaliatory missiles at Israel?

A massive ammonium nitrate explosion rocked Beirut’s port on Tuesday, sending up a mushroom cloud that reminded some of Hiroshima and Nagasaki, damaging buildings, blowing out windows, overturning cars, wounding over 3,000 people at least, and leaving dozens dead. Flying glass and debris were responsible for many of the injuries. Inhalation of toxic gas was also a worry.

And, of course, the tragic moment, when people were weeping and mourning and frightened, and tensions in the region were high—the tragic moment was ruined by Donald J. Trump. He told reporters at the White House that he had consulted Pentagon officials and that “This was a—seems to be according to them, they would know better than I would, but they seem to think it was an attack. It was a bomb of some kind.” This according to Ghazi Balkiz, Tamara Qiblawi and Ben Wedeman at CNN. (The CNN studio in Beirut had its glass door shattered and cameras and equipment were damaged).

The CNN team called up three US Defense Department officials to find out if what Trump said was true; they “told CNN that as of Tuesday night there was no indication the explosion was an attack. The officials, who declined to be identified so they could speak freely, said they don’t know what the President is talking about.”

They might have added that Trump himself doesn’t know what he is talking about.

His mouthing off like that, however, was extremely dangerous. After the explosion, people in Lebanon were on pins and needles, and for all they knew, it was the work of Israel, which had bombed their country mercilessly and destroyed infrastructure in 2006. Just last week, Israeli PM Binyamin Netanyahu alleged a border clash with the Lebanese Shiite party-militia, Hezbollah, which Hezbollah denied.

What if Trump’s remarks were taken seriously and some hothead fired retaliatory missiles at Israel? Netanyahu needs a diversion from his corruption trial and the large demonstrations against him.

Having an addled president means that we are always in danger of his causing disasters all around us, from his disastrous coronavirus response to dangerous foreign policy statements like this.

People in Beirut did not think Trump was addled, they thought the US government was up to something no good.

The left-leaning al-Akhbar newspaper wrote, “The political exploitation of the crime that had taken place began immediately. Saudi Arabia attempted, through media and pundits who are in its back pocket in Riyadh, Dubai and Beirut, to tie the incident to Hezbollah—before the American president Donald Trump said that US military personnel ‘believe that the explosion in Beirut derived from a bomb of some sort.'”

In fact, in 2013 a merchant vessel from Moldova, the Rhosus, was on its way to Mozambique with 2,750 tons of ammonium nitrate, a chemical used in fertilizer, but which can also be used in bombs. The ship developed technical difficulties and stopped at Beirut’s port. Inspectors found the vessel unsound and would not let it proceed. The ammonium nitrate was offloaded into port warehouses. Apparently the ship was still just sitting there somewhere at the port, never having been repaired. Lebanon’s Prime Minister, Hassan Diab, admitted that the chemicals were never secured or properly disposed of—this highly volatile material was just allowed to sit there.

That is, Lebanon’s government is corrupt and inefficient, and has driven the country into the ground. People had to rush to hospital with minor wounds and were afraid of catching coronavirus there. As I explained yesterday, 50 percent of the country is now in poverty because of the Coronavirus Depression, and 500,000 children are having to skip some meals.

Ironically, Trump intersected with that story, because he is doing the same thing to the United States, and great destruction is coming in his wake.

Featured image: The scene of the deadly explosion near the port in Beirut, the capital of Lebanon. (Photo: AFP/Getty Images)

Juan Cole teaches Middle Eastern and South Asian history at the University of Michigan. His new book, The New Arabs: How the Millennial Generation Is Changing the Middle East (Simon and Schuster), will officially be published July 1st. He is also the author of Engaging the Muslim World and Napoleon’s Egypt: Invading the Middle East (both Palgrave Macmillan). He has appeared widely on television, radio and on op-ed pages as a commentator on Middle East affairs, and has a regular column at Salon.com. He has written, edited, or translated 14 books and has authored 60 journal articles. His weblog on the contemporary Middle East is Informed Comment.