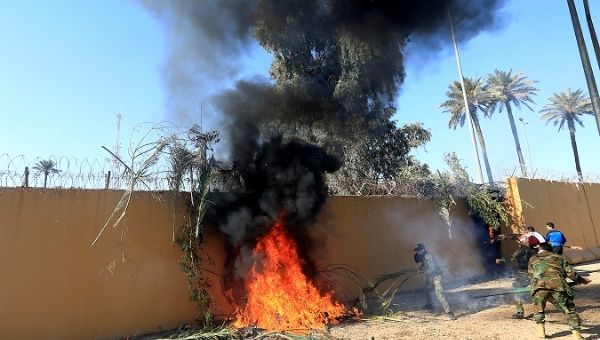 Iraqi Protesters are furious about a U.S. military attack that killed 25 fighters of the Popular Mobilization Forces.

Hundreds of protesters sympathetic to the Popular Mobilization Forces (PMF) stormed Tuesday at the United States Embassy in Baghdad following deadly U.S. attacks against positions of that armed group on Sunday night. Neither the U.S. ambassador nor officials are inside the building.

The protesters managed to penetrate the diplomatic headquarters and burned part of the surrounding wall, as well as some security booths and towers, while the legation security guards are trying to disperse them with tear gas.

Hundreds of people crossed the Al Mualaq bridge to reach the Green Zone, where the government and diplomatic headquarters are located. Then some protesters tried to climb the concrete wall surrounding the U.S. embassy.

Protesters made their way to the building and organized a sit-in after participating in the funerals of the 25 victims of U.S. bombings against positions of the Shiite militia.

Iraqi protesters storm the US Embassy compound in Baghdad after deadly airstrikes https://t.co/FUjJGSoV8p

After arriving in the Green Zone, protesters chanted anti-U.S. government slogans and set up camping tents in front of the Embassy, ​​where they also planted Iraqi and PMF flags.

Among those gathered around the diplomatic headquarters are leaders of the Popular Crowd such as its president, Faleh al Fayad, its vice president, Abu Mahdi al Mohandes, and the Shiite organization Badr leader Hadi al Ameri.​​​​​​​

On Dec. 29, U.S. drones and F-16 fighters bombarded various positions of the Islamic Resistance Movement of Iraq, known as Kataeb Hezbollah, which is part of the Popular Mobilization Forces (Hashd al-Shaabi​​​​​​​), in the Al-district Qaim, in the province of Al-Anbar.

RELATED CONTENT: The Israel Lobby’s Hidden Hand in the Theft of Iraqi and Syrian Oil

“The attack on the resistance forces will play against the U.S.,” said Yavad Kazem al-Rabiawi, a senior Hashd al-Shaabi​​​​​​​ official, who added that the consequences of the U.S. bombing will pave the way for an end to the presence of the United States in Iraq.​​​​​​​

Protests broke out in front of and inside Iraq's US embassy compound on Dec. 30, following a round of deadly airstrikes the US launched on Iraq and Syria. pic.twitter.com/4SFhAO5L5c

“Despite their ideological differences, all Iraqi parties have condemned this cowardly U.S. measure. This will lead to the expulsion of the U.S. troops from Iraqi soil. They know well that to attack the resistance forces will play against them and pave the way for the end of their presence in the country.”

The Iraqui political and religious authorities condemned and rejected the U.S. response and the Government called the action “a violation of Iraqi sovereignty.”

On Monday, the Shiite cleric Muqtada al Sadr requested collaboration between institutions and political parties to “expel” the U.S. “by political and legal means.”