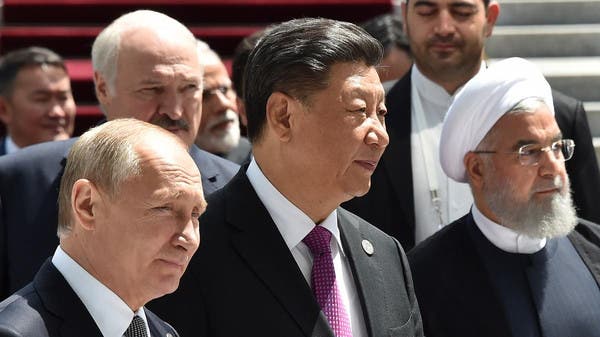 Iran’s navy commander has said on the sidelines of a landmark joint drill in the Gulf of Oman that the US must leave the region.

“The era of inroads by the Americans in the region has ended and they have to gradually leave the region,” Rear Admiral Hossein Khanzadi said on Sunday, the third day of naval drills by Iran, Russia and China.

The three countries, he said, are showcasing “a new manifestation of developing their relations and cooperation at the highest level”.

“When military forces stage a drill, it means measures in political, economic and other aspects have been carried out quite well and today we are witnessing this important and big exercise which aims to boost security in the region.”

Khanzadi touched on “the civilizational rise of the great powers of Asia,” calling it an important event.

“This time, this rise is charting out bold lines for both the region and the world in the form of a coalition and convergence, rather than individual moves,” he said.

“The friends of the Islamic Republic of Iran and the region will be very happy with this move but those who seek to impose undesirable security arrangements, such as the Americans and their sidekicks, will receive a highly significant message from this drill,” Khanzadi added.

Naval units participating in the four-day drills, being held for the first time between the three powerful countries, have carried out a variety of tactical exercises and successfully completed all stages so far, he also said.

“We believe maritime security is an issue that needs to be worked on collectively and this task is the responsibility of the countries which have maritime capacities and capabilities.”

Iran has said the joint exercises in the Gulf of Oman and the Indian Ocean “make clear our broader commitment to secure vital waterways.”

The Gulf of Oman is a particularly sensitive waterway as it connects to the Strait of Hormuz, through which about a fifth of the world’s oil passes and which in turn connects to the Persian Gulf.

Khanzadi said Iran believes there is no need for outside forces in the region.

“The countries of the region can help establish security together and we hope that other countries will join us in the future,” he said.

RELATED CONTENT: The Israel Lobby’s Hidden Hand in the Theft of Iraqi and Syrian Oil

Also on Sunday, deputy Army commander for coordination affairs Rear Admiral Habibollah Sayyari said the ongoing drills are “just the beginning of a trilateral cooperation which will continue”.

“We enjoy the capability to conduct multilateral maneuvers with various countries around the world” to ensure peace and security in the region, he said.

Sayyari said, “Certain sides seek to damage the interests of others through exercises, but that is not what we are after. What we seek is to establish peace and security where the interests of all countries converge.”

The naval drills kicked off on Friday in Iran’s Chabahar on the Gulf of Oman. They cover 17,000 square kilometers and consist of various tactical exercises, such as target practice and rescuing ships from assaults and fires.

The trilateral drills aim to secure international trade routes in strategic waterways and boost preparedness among participants against piracy and marine terrorism.

The three countries have sent some of their most advanced vessels to the exercises.

The naval drills come at a time of heightened tensions between Iran and the US.

In the past few months, the US has taken a warlike posture against Iran and stepped up its provocative military moves in the Middle East, sending an aircraft carrier strike group and a bomber task force to the region.

The United States has also been trying to persuade its allies into a coalition with the purported aim of providing “security” for merchant shipping in the Strait of Hormuz and other strategic Middle Eastern shipping lanes.

Experts say the trilateral drills in the Indian Ocean send a message to the US administration that Washington’s efforts to isolate Iran have failed and that Russia and China will not cave in to American bullying.

Featured image: Iran’s navy kicked off the first joint naval drill with Russia and China in the northern part of the Indian Ocean. (Photo: AFP)