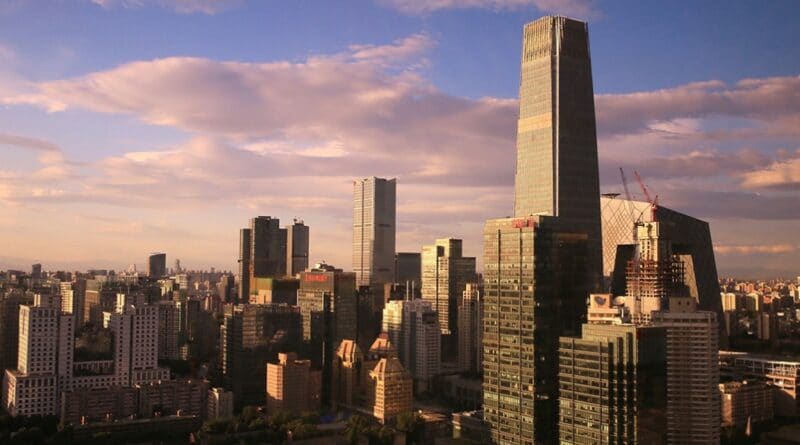 Foreign domination does not have the same gravitational pull on the Chinese economy as on the economies of Britain, the US, Japan and others. CARLOS MARTINEZ examines why

THE slogan “Neither Washington nor Beijing” relies largely on the premise that China is imperialist, and that the new cold war is an inter-imperialist war — a war in which the antagonists are fighting over their share of the spoils from the exploitation of foreign countries.

If China isn’t imperialist, and if the new cold war isn’t an example of inter-imperialist rivalry, the “third camp” position is simply not viable.

We have to start by attempting to define imperialism. In his classic work Imperialism: The Highest Stage of Capitalism — the first serious study of the phenomenon from a Marxist perspective — Lenin states that, reduced to its “briefest possible definition,” imperialism can be considered simply as “the monopoly stage of capitalism.”

He notes that such a concise definition is necessarily inadequate, and is only useful to the extent that it implies the presence of five “basic features”:

1. Capitalism has developed to a level where, in the main branches of production, the only viable businesses are those that have been able to concentrate a huge quantity of capital, thereby forming monopolies.

2. The emergence of a “financial oligarchy” — essentially banks — as the driving force of the economy.

3. Export of capital (foreign investment) as an important engine of growth.

4. The formation of “international monopolist capitalist associations which share the world among themselves,” the equivalent of the modern multinational company.

5. The world’s territory has been completely divided up among the capitalist powers; markets and resources around the globe have been integrated into the capitalist world system.

Lenin’s definition remains a useful and relevant description of the capitalist world.

However, a few months after the publication of his book, a new variable appeared in global politics in the form of the socialist camp.

The socialist group of countries disrupted the imperialist system in a number of ways: most obviously, it directly withdrew the socialist countries from that system; it offered support to colonial and anti-imperialist liberation movements, accelerating their victory; and it offered aid and favourable trading relations to formerly colonised states that would otherwise have little other option than to subject themselves to neocolonial oppression.

The arrival of socialist state power in Europe and Asia was, therefore, an unprecedented boon for the cause of national sovereignty around the world. At the same time and in equal measure, it was a setback for the imperialist world system.

No longer is the world so cleanly divided into imperialist and oppressed nations as it was before 1917.

As such, Lenin’s five features of imperialism can’t simply be used as a checklist for answering the question of whether any given country is imperialist.

This provides a useful framework for thinking about whether China is imperialist: is it engaged in a process of domination guided by economic interests?

Does it, in Samir Amin’s words, leverage “technological development, access to natural resources, the global financial system, dissemination of information, and weapons of mass destruction” in order to dominate the planet and prevent the emergence of any state or movement that could impede this domination?

At the time Lenin was writing, China was unambiguously in the group of oppressed countries, having been stripped of a large part of its sovereignty by the colonial powers over the course of the preceding 80 years.

One of the world-historic victories of the Chinese Revolution was to end that domination and to establish the national independence of the Chinese people.

So inasmuch as China is imperialist, this must be a recent phenomenon — presumably starting in the last 20 years, in which period China’s sustained GDP growth has resulted in it becoming the largest economy in the world (in purchasing power parity terms) and a technological powerhouse.

Certainly China has its fair share of monopolies that deploy extraordinary quantities of capital.

In terms of foreign direct investment outflows ratio to GDP (ie the importance of capital export to the national economy as a whole), the value for China is 0.8 per cent — a similar level to Brazil, and far less than Ireland, Japan, Sweden, the Netherlands and the United Arab Emirates.

It would be difficult to make a case for labelling China imperialist on the basis of its foreign investment alone.

In a long piece for Counterfire, Dragan Plavsic claims that China’s global expansion is “merely the latest example of a road well-travelled by other major economies such as Britain, Germany and the US, as they too expanded beyond their national limits in order to take competitive advantage of global trade and investment opportunities.”

Moreover, “the competitive logic that motivated them is not qualitatively different from the one motivating China today.”

Competition demands relentless innovation, which inevitably reduces the role of human labour in the production process, which by definition reduces the component of “variable capital” with the magical property of being able to transform a given sum of money (the cost of labour) into a larger sum of money (the value added by labour).

The ever-declining proportion of variable capital means an ever-declining rate of profit, which capitalists compensate for with ferocious expansion, capturing new markets and lowering the costs of production.

This is the economic engine at the heart of imperialism — the “competitive logic” referred to.

The problem with Plavsic’s analysis is that the “well-travelled road” taken by Britain, Germany and the US is no longer open.

By the time Lenin was writing — a century ago — the world was already “completely divided up, so that in the future only redivision is possible.”

That is, country A can only dominate country B by displacing country C; the means for this process is war and military conquest.

Since China’s record remains remarkably peaceful, it’s evident that inasmuch as China has a path to becoming an imperialist power, it is by no means the “well-travelled” one.

Noam Chomsky, by no measure an ideological adherent of the CPC, pokes fun at the idea that China would become an aggressive military power on the scale of the US, “with 800 overseas military bases, invading and overthrowing other governments, or committing terrorist acts … I think this will not, and cannot, happen in China … China is not assuming the role of an aggressor with a large military budget, etc.”

Further, the structure of the Chinese economy is such that it doesn’t impel the domination of foreign markets, territories, resources and labour in the same way as free market capitalism does.

The major banks — which obviously wield a decisive influence over how capital is deployed — are majority-owned by the state, responsible primarily not to shareholders but to the Chinese people.

The key industries are dominated by state-owned companies and subjected to a heavy regulation that doesn’t have private profit maximisation as its primary objective.

Li Zhongjin and David Kotz assert that while “China’s capitalists have the same drive towards imperialism of capitalists everywhere,” but further note that any such drive is restrained by a CPC government which “has no need to aim for imperial domination to achieve its economic aims.”

While capitalists are represented within the CPC, there is “no evidence that capitalists now control the CPC or can dictate state policy”; hence “the Chinese capitalist class lacks the power to compel the CPC to seek imperial domination.”

As such, the prospect of foreign domination does not have the same gravitational pull on the Chinese economy as it did/does on the economies of Britain, the US, Japan and others.

Nor do the objective conditions exist for China to establish even an informal empire without direct military confrontation with the existing imperialist powers.

We will turn to these accusations in the next articles in the series.

Featured image: A view of the Beijing skyline