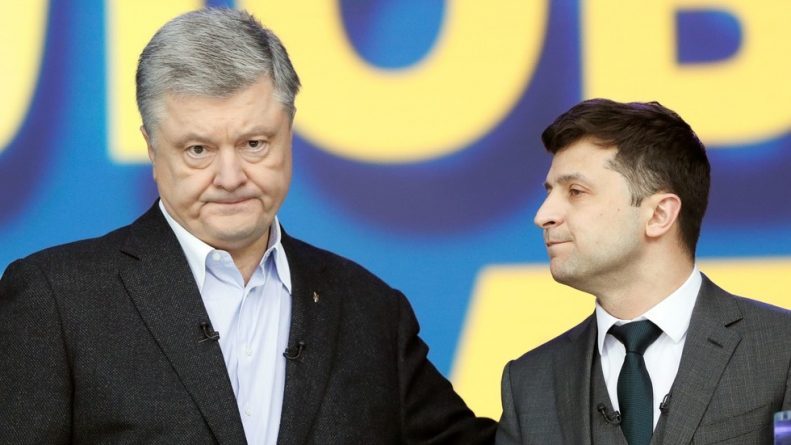 Ukraine’s incumbent president Petro Poroshenko and hard-hitting frontrunner Volodymyr Zelensky faced off in a much-hyped big stadium debate, exchanging harsh accusations yet revealing little of their plans for the country.
It was promoted as the most spectacular political show in Ukrainian history, but the debate only attracted 22,000 people at the Olympiyskiy stadium in Kiev on Friday, despite a capacity of more than 70,000. The event was the final chance for the contenders to impress the voters ahead of the election’s second round on Sunday.

RELATED CONTENT: US and NATO’s Ongoing Support for Neo-Nazis in Ukraine

An experienced comedian, Zelensky delivered stronger punchlines on the night, calling himself the predictable outcome of Poroshenko’s mistakes. “I’m not your opponent – I’m your sentence,” he told the president, hinting that the latter may well face prosecution for his misdeeds after the election.

He kneeled before the crowd in theatrical gesture, insisting that he was eager to do the same before every mother who lost her son in the military conflict in Eastern Ukraine. The fighting in Donbass was initiated by the current government and the candidate promised to do everything to end the war when in office.

Zelensky accused the head of state of stealing five years of Ukrainians’ lives while he was in power. He also grilled the president over Ukraine’s having turned into the “poorest country in Europe,” with low pensions, deteriorating infrastructure and corrupt officials from his inner circle avoiding responsibility.

Zelenskiy supporters booing Poroshenko during his opening remarks and shouting for him to get out. They haven’t stopped since he began. pic.twitter.com/Szkl3bmeUd

There was little to parry with, but Poroshenko, who is trailing behind his rival by a whopping 46 percent, still tried to look as confident as possible. He delivered his lines with a lot more aggression, attacking Zelensky for his lack of experience and “incompetence,” which would make him a weak president and a commander-in-chief incapable of standing strong against the terrifying Vladimir Putin. The incumbent president even accused Zelensky, who had made movies in Russia before 2014, of being a Kremlin stooge.

Poroshenko was more eager to play the ‘Russian aggression’ card that used to work for him in the past, once again promising to bring Crimea back and achieve military victory in Donbass, but didn’t specify how he was planning to do this. During his speech, he was almost constantly booed by Zelensky’s supporters, who clearly overwhelmed those in the stands in Olympiyskiy who were backing the president.

The debate ended without a handshake and it wasn’t the only awkward moment. First, Poroshenko and his team started singing the national anthem before the specially invited singer could step in. When this was sorted out, Zelensky suddenly decided to kiss his wife to the tune of the anthem and showed thumbs up to the stadium.

After leaving the stadium, the Ukrainian president moved to a television studio for the second round of debates. To no one’s surprise he was left alone there as Zelensky ignored the meeting which he had decided not to attend from the very beginning.

This is getting serious and seriously awkward. Poroshenko leaves his lectern to step up to Zelenskiy as he reads out a list of highly critical questions crowdsourced from his supporters. pic.twitter.com/Slzo70fTSD

“Poor Ukraine. The debate was absolutely insubstantial” as neither of the candidates proved that he knew what to do with the country, Konstantin Kosachev, the head of the Foreign Affairs Committee in the Russian Federation Council, wrote in a Facebook post. “It seems Ukraine is up for another five lost years, no matter who wins.”

Zelensky claimed 30.24 percent in the first round of the election on March 31, beating Poroshenko with an almost twofold advantage (15.95 percent). The latest polls reveal that 73 percent of Ukrainians were eager to give their vote to him on Sunday.