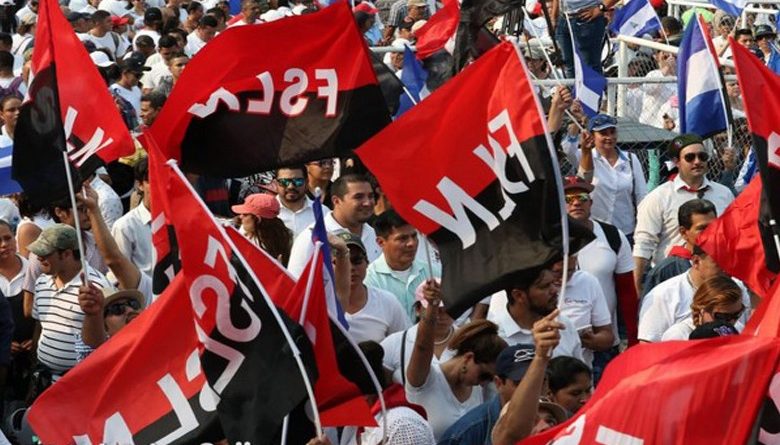 When the U.S. recently supported violence in the streets of Nicaragua, it was attempting a Gene Sharp style coup: a covert, soft coup which did not use the traditional methods of a direct coup. In the end, the people did rise up, but in favor of their revolutionary government.

The violence started with a revolt in April of 2018 and in the end, bands supported by the gringos had left hundreds of people dead and wounded, destroyed both public and private property, and demolished the tourism sector, a major revenue source for the country.

The fascists sought the help of the U.S. to break the legs of social progress in Nicaragua. The economic, social, and political recovery is now apparent.

The enemies of peace had been defeated. The Yankee State Department’s Todd Robinson reflected their frustration and resentment:

“And we’re going to push the idea that in those [upcoming] elections we look for new leaders in Nicaragua. Leaders that don’t include Ortega and [Vice-president Rosario] Murillo.”

… I don’t believe Ortega and Murillo have any doubt as to the U.S. position regarding any kind of political agreement.

We can see that the empire is not easing up the pressure. It is maintaining its hatred for a free Nicaragua, which it targets for manipulation, interference, and covert threats.

There is no doubt about the U.S. intentions, which are always the worst. It is apparent that meddling in the affairs of other countries is the U.S. style. Imperialism cares nothing about democracy.

Where did the attempted coup come from?

In November 2017 the Sandinista Front for National Liberation (FSLN) won the municipal elections by a landslide, showing the U.S. that democracy is not its friend. The FSLN won 135 out of 153 mayor’s offices.

RELATED CONTENT: NACLA’s Shameless Apology of US Imperialism in Nicaragua

The electoral failure of the far-right—headed by the Catholic Church and publicly backed by the U.S. Senator known as a friend to drug traffickers and coup-monger in chief—Marco Rubio. The latter supported the terrorist revolt and was photographed with its leaders. He had announced his support for economic sanctions and for a blockade and seizure of Nicaraguan property in the U.S. and EU, the suspension of loans from international organizations, the closure of bank accounts, etc. He was placing his bets on blockade, hunger, and destruction.

Narco Rubio, with his track record that warrants a change of name, is also a defender of gun sales and promoter of terror and coups throughout Central America and the Caribbean. He was the gringo posterchild supporting those who were sowing pain and suffering in that small country. The Sandinista Front had already defeated his kind when it overthrew their dictator, Somoza.

The right wing longed for the days when Rubén Darío and Sandino were few in number. They sought a way to start new conflicts and used psychological warfare to exacerbate them. They had been using their media to propagate accusatory discourse about personal persecution, veiled repression, lack of freedom of the press, and intimidation saying that the Sandinistas were using fear to silence dissent. Ultimately, those who sought to destabilize the country to bring it back to colonial times had been trying to paint themselves as victims.

Those same people who purport to be victims are weaving alliances for the next round of elections in November 2021. They have now named their electoral cartel: the National Opposition Coalition of Nicaragua (CNON).

Amidst those preparations we again find the interests of the U.S. in the region. That is why the imperial Secretary of State, Mike Pompeo, went to Costa Rica to meet with its president, Carlos Alvarado. The program he took with him includes preparing positions and actions against … Venezuela… and Nicaragua. This brings us back to earlier coup preparations. Among these papers we find the remarks of another criminal Secretary of State, Henry Kissinger:

Pompeo’s employees and spokespersons in Nicaragua have begun to speak against government spending, the basic needs of the working class majority, saying that public spending is leading to an economic crisis. From there they turn it up a notch to hide their cynicism for their own benefit by saying that taxes must be cut in order to encourage investment, as was stated by banker-business owner Róger Arteaga. It is odd that such a person does not care about public spending, only reducing taxes.

The President of the National Assembly, Gustavo Porras, has responded to these ploys by saying that using government funds on public goods protects the public interest; using it for agricultural production shows budgetary consistency and labor projects; and adjusting foreign investment yields advances in housing, health, and education.

Is there any doubt as to whose side they are on?

Let’s review the record on social issues since the Sandinista Front came into office:

The Nicaraguan people will remain independent of imperialism if they can keep morale, social organization, and political consciousness high, and if they can rise up in favor of their revolutionary government until the reactionaries and their funders finally acknowledge defeat.

“What happened to 1980s revolutionary Nicaragua was similar to what happened to Guatemala when President Arbenz was overthrown in 1954; and in the attempt to overthrow the Cuban Revolution in 1961; and in the military escalation in Vietnam; and in Pinochet’s coup in Chile, among many other cases. If Vietnam was a high school for CIA shock troops, Nicaragua was its university. (from the chapter “El equipo de choque llega a Nicaragua” in Hernando Calvo Ospina’s book El equipo de choque de la CIA. Cuba, Vietnam, Angola, Chile, Nicaragua… published by El Viejo Topo).

“What makes class domination or imperialism specifically capitalist is the prevalence of economic coercion, which is different from direct non-economic interference: political, military, and judicial. However, this does not mean that capitalist imperialists can do without non-economic force. First, capitalism certainly does not rule out more traditional forms of coercive colonization. On the contrary, the history of capitalism—I need not remind you—is a very long and bloody story of conquest and colonial oppression. At any rate, the development of economic imperatives that are powerful enough to replace older forms of direct domination, took a very long time to develop and were only perfected by the Twentieth Century. But more specifically, even these more highly developed forms of capitalist imperialism require non-economic support. Non-economic support is clearly essential to maintain economic coercion itself,” (from El imperio del capital by Ellen Meikins Wood, El Viejo Topo publishers).