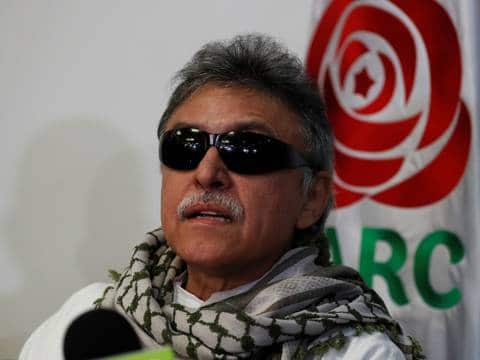 Colombian Army commandos on May 17, 2021 killed Jesús Santrich, a 30-year veteran of the Revolutionary Armed Forces of Colombia (FARC). The ambush took place in Zulia Province, in northeastern Venezuela; six others died.  Santrich was a spokesperson for the FARC negotiating team in the talks in Havana with Colombia’s government that led to a peace agreement in 2016.

Because former FARC combatants were being killed despite the Agreement and because Colombia’s government and US agents were trying to extradite him to the United States on drug charges, Santrich went into hiding in 2019. He joined the “Second Marquetalia” offshoot of the original FARC insurgency, which was returning to armed conflict.

With his essay, Santrich challenges our own modes of anti-imperialist struggle and of creating socialism, impeded in both instances, we suggest, by a lack of long-term, visionary aspirations. That’s clear, for example, in the blunted response of progressives and radicals to recent developments in U.S. hybrid war involving Colombia, Haiti, and Cuba. With an expansive view, Santrich insists upon political leadership and political mobilization that attend to the future, embrace great purposes, and fight with determination and commitment.

His words
In his essay, Santrich writes about Simon Bolivar; the fight for independence from Spain; the FARC’s early years; leadership qualities of Manuel Marulanda, pioneer socialists of the French Revolution; Bolivar’s teacher Simón Rodríguez, an early socialist; and more. Along the way, Santrich provides ideas that, taken seriously, might greatly strengthen the revolutionary project in our own era.

For example: “Marxists must keep utopia foremost in their consciousness. It drives mass actions. They must assume that a revolutionary movement, whatever its origins, doesn’t qualify as such if it lacks that component manifesting as irrepressible effort towards change categorized as “impossible.” But utopia must always take off from a basis in realty. We humans have the duty to regard the world we want as another world that’s possible. Paraphrasing Bolívar, we are looking for the “impossible,” while leaving the possible up to everyone else, every day …

He continues: “To declare oneself Bolivarian and, as such, declare oneself a revolutionary on the Marxist path implies lifelong motivation derived from the hope of transforming society and finding justice. This is a constant and is strong enough with its broad vision as to point to utopia as a characteristic of political consciousness and the natural result of rational belief.”

He adds: “Utopia is a higher goal of commitment. That’s so because even at the beginning, the matter of possibility or impossibility is already uncertain due to extreme difficulties ahead, or uncertain survival of purpose as historical implementation evolves. But like history itself, utopia does not end.”

Moreover, “In the hopeful quest for realization of the “impossible,” the process calls upon a mixture of illusions, realism, magic, and love for people as a reason for life … The essential interest of the utopian is preservation of man and nature in absolute equilibrium, thus displaying the potentials of historical memory, faith, dignity, and our identity as vital factors for existence.

“Confronting oppression and marching on the path of utopia, the revolutionary no longer is resigned. He or she is unconditionally, permanently, and creatively committed to the poor people of the world … Let’s say then that the Marxist-Bolivarian idea of a revolutionary is of someone who fixes on an ideology that, while encompassing reality, is not yet solidified and is perhaps uncertain. The goal is set of becoming absolutely convinced that this reality will be fulfilled, “impossible” though it may seem….

“The author of the Communist Manifesto, appealing to selfless purpose, was calling for struggle offering the possibility of risks. … Marx was calling for action needing to pass a test of fire in the face of historical commitment prompted by circumstances, even at the risk of death. He was clarifying a concept of living, whose own ethics intermeshed with the dialectics of reality that was moving, but always toward the future. …”

Santrich goes farther afield: “This kind of thinking envisions Marxists and Bolivarians alike as rising up, in our world, to the level of magical realism. And why not? Magical realism goes beyond mere rationalism. We have symbols, imagination, and creativity – all based on rich traditions rooted in indigenous experience in the Americas. It’s founded also on the syncretism of our mixed and oppressed mestizo peoples. Playing out, this proposition looks toward installing social justice, that is to say, accomplishes what’s ideal for the benefit of humankind.”

The stakes are high:“Perhaps one of the most fateful legacies for revolutionaries is apprehension on facing the danger that imperialism poses for the very existence of the planet with its catastrophic kind of developmentalism. In the face of great challenges, great resolve is necessary, really a triple boldness: action that overcomes determinism; recovery of the role of subjectivity, passion, audacity, and recklessness; and faith in the initiative of the masses, as they face the immediate prospect of “defeat.” In such circumstances, uncertainty and silence are worth nothing. …

“What’s in play is the very survival of the human species, of life, of nature in general, all put at risk through the destructive power of capitalism. But we will not idle around patiently waiting for an automatic end to capitalism and for a communist alternative automatically to flourish. Humanity’s conscious intervention is necessary. It’s our immediate duty. Revolutionaries must connect utopia with liberation practice, at whatever cost …”

RELATED CONTENT: Jesús Santrich: The Laughter of a Bolivarian Cannot Be Easily Extinguished

Meanwhile, on the ground
Next on our agenda is a survey of recent developments in Haiti, Colombia, and Cuba that are significant for the weak response they generated from anti-imperialists. Fragmentation and dwarfed ambitions seem to have paralyzed their fight against exploitation, plunder and militarization. We think the far-reaching aspirations of Santrich point to the alternative approach we need.

President Jovenal Moïse of Haiti was assassinated on July 7, presumably the result of rivalry among Haitian oligarchs, encouraged perhaps by leaders in Washington. All but two of the 28 perpetrators were former Colombian army regulars, now employed as mercenary soldiers. Many had received U.S. training. Colombia mercenaries have engaged militarily in the United Arab Emirates, Yemen, Afghanistan and Dubai, Honduras, Venezuela and elsewhere.

CTU Security, a Florida company owned by right-wing Venezuelan émigre Antonio Intriago arranged for the assassination.  Miami – based Intriago has ties to regressive Colombian President Ivan Duque; to Juan Guaidó, the U. S. puppet  president of Venezuela; and to Christian Sanon, a Haitian physician living in Florida and seeking to be president of Haiti. Intriago’s company in 2018 carried out a drone attack against Venezuelan President Nicolas Maduro.

The Cessna four-passenger plane owned by Helidosa company in the Dominican Republic is emblematic of imperialism’s convoluted presence in the region.  Intriago, Sanon, and two others traveled to Haiti on that plane to be on hand at the assassination. After surgical care in Florida for wounds suffered during the attack, Martine Moïse, the assassinated president’s widow, returned to Haiti on the same airplane. In 2019, it transported right-wing Venezuelans to Barbados for negotiations with President Nicolas Maduro’s representatives, and did so again the following year with Juan Guaidó aboard.

The U.S. blockade of Cuba comes into view. Campaigning in 2020, President Biden assured voters he would ease blockade-related restrictions on Cuba imposed by Donald Trump. Biden has added new sanctions. For 60 years, the U.S. government has blockaded Cuba in order to cause suffering there. Suffering is mounting now due to sanctions and adverse health and economic effects of the Covid-19 pandemic

On July 27 Biden met with Cuban-American elected officials in his office. He stated that, “I want Cuban Americans to know that we … hear the cries of freedom coming from the island … We’ve brought to bear the strength of our diplomacy, rallying nations to speak out and increase pressure on the regime.”

Correlations
The opportunistic Biden seeks electoral advantage in Florida. Bipartisan consensus remains as to replacing Cuba’s government. Opposition to the blockade is at the margins of U.S. politics.  No U.S. hand or hierarchy of control is evident in the assassination of Haiti’s president. Marking both cases is a mélange of private interests, transactional relationships, and profit-making opportunities.

The unpleasant details reported here likely will soon be forgotten. Many already distracted and pessimistic progressives probably prefer not to be reminded of politicians’ corrupt and faked behavioral patterns.

It could have been otherwise. A narrative might have been developed that, absorbing the incidents noted here, might have contributed to shaping a powerful indictment against the power structures. That in turn might have helped set the stage for a return of sustained political counter-attack – if, that is, a large and powerful movement actually existed.

That’s the contribution of Jesús Santrich. He traces out characteristics of political leadership and permanent mobilization needed now for fightback and revolutionary optimism. His prescription calls for a movement that satisfies the subjective needs of oppressed peoples. License would be created for great longings and dreams of fulfillment, for these to be normalized.

Santrich draws upon a world that now for many is off-limits. We honor his contribution, a rarity, as it seems, in our own time. But he is not alone. We remember:

Karl Marx, The Civil War in France, 1871 – “The Commune, they explain, intends to abolish property, the basis of all civilization!… Yes, gentlemen, the Commune [aims] at the expropriation of the expropriators … But this is communism, “impossible communism! …  [But] “if cooperative production is not to remain a sham and a snare; if it is to supersede the capitalist system …[W]hat else, gentlemen, would it be but communism, “possible” communism.”

José Mariátegui, founder of the Peruvian Communist Party, 1928 – “We certainly don’t want socialism in America to be a copy or tracing. It must be a heroic creation. We have to give life to Indian-American socialism with our own reality, in our own language.”

Ernesto Che Guevara, Socialism and Man in Cuba, 1965 – “[I]n moments of great peril it is easy to muster a powerful response with moral incentives. Retaining their effectiveness, however, requires the development of a consciousness in which there is a new scale of values. Society as a whole must be converted into a gigantic school.”