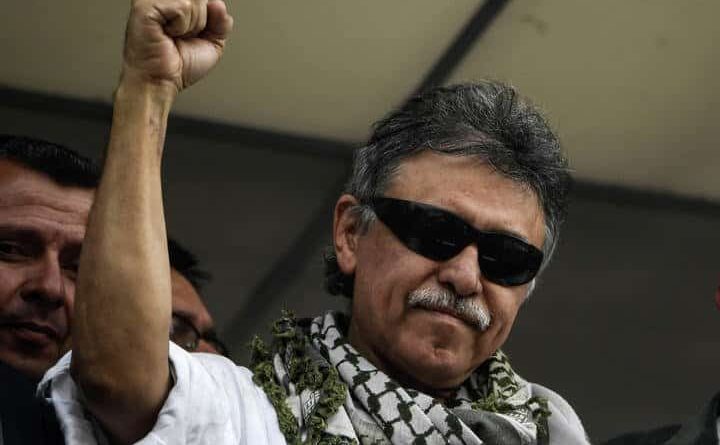 When a respected revolutionary dies, the impact reverberates around the world. Or, as Chinese communist leader Mao Zedong said, “To die for the people is weightier than Mount Tai, but to work for the fascists and die for the exploiters and oppressors is lighter than a feather.”

Commander Jesús Santrich, a communist and member of the National Directorate of the Revolutionary Armed Forces of Colombia-People’s Army (FARC-EP), Second Marquetalia, died for the people.

Santrich was reportedly assassinated by a Colombian military squad on May 17. The killing took place on Venezuelan territory near the Colombian border.

After murdering Santrich, the killers cut off his left pinkie finger to verify his death (and collect a $1.5-million bounty placed on his head jointly by the Colombian and US governments), then fled back into Colombian territory aboard a helicopter.

The assassination, carried out on another country’s territory in blatant violation of international law, was reminiscent of a similar operation in 2008, when Colombian troops killed FARC Commander Raúl Reyes in Ecuador.

It came just four days after the Colombian Supreme Court ruled in favor of Santrich’s extradition to the United States. His fellow FARC Commander Simón Trinidad has been held incommunicado since his extradition to the US at the end of 2004. Political prisoner Trinidad is currently serving a 60-year sentence in a Colorado supermax prison.

“The court carries out the orders of the gringos,” Santrich said in a statement released the day before his death.

It’s no coincidence that the court ruling and assassination took place during Colombia’s unprecedented month-long popular uprising against the right-wing regime of President Iván Duque. It was meant as a warning to those fighting in the streets who might consider taking the movement to a higher level, from rebellion to sustained resistance.

Such a high-level hit could not have taken place without the approval and involvement of the Pentagon and the Biden administration. All are guilty of Santrich’s murder.

A fighter for the people
Jesús Santrich was one of the most renowned revolutionaries in Latin America, a popular and influential spokesperson for revolutionary Marxism and the path of armed struggle.

He was a leader of the Bolivarian Continental Movement (MCB), an alliance of revolutionary parties and movements in South America.

An internationalist to the core, Santrich was usually seen wearing a keffiyeh as a symbol of solidarity with the Palestinian people. The Israeli apartheid regime plays a big role in training and steering Colombia’s repressive forces, as directed by the United States, and Santrich felt the connection with Palestine’s struggle deeply.

Santrich was legally blind from a young age and walked with the aid of a cane. But his disability was no match for his revolutionary determination. After joining the FARC in the early 1990s, he quickly proved himself a capable organizer and strategist, and gained the rank of commander.

His closest friends and comrades, who called him Trichi, spoke of his humor, thirst for knowledge and wide-ranging interests. Santrich played the saxophone, composed poetry, and painted despite his visual impairment.

He was also a prolific author. At the time of his death, Santrich was writing a series of articles on the relationship between Marxism and Bolivarianism, the national-liberation outlook uniting peoples across Latin America.

US – Colombia betray peace accords
Santrich was a member of the team that negotiated the 2016 Havana Peace Accords between the government of Colombia and the FARC-EP. While working for several years in Cuba on the peace agreement, Santrich met and befriended many visiting activists and revolutionaries from around the world.

As the negotiations dragged on and pressure for a resolution grew, Santrich and fellow negotiator Iván Márquez warned that the FARC should not agree to disarm before the Colombian regime met its obligations. However, they were overruled.

When Santrich returned to Colombia, it quickly became apparent to him that Duque’s government and its Washington masters had no intention of honoring the Havana Accords, using them only as an excuse to disarm and divide the guerrilla movement.

Santrich himself, though guaranteed a seat in Congress and legal immunity under the agreement, was thrown into prison on false “drug trafficking” charges. He was held in torturous, life-threatening conditions.

A mass movement fought for and won his release. But the threat of extrajudicial killing or extradition to the US still loomed.

Santrich went underground. In August 2019, Santrich, Márquez and others announced the formation of the FARC-EP, Second Marquetalia, an initiative to rebuild the revolutionary guerrilla movement following the betrayal of the peace agreement by Bogotá and Washington.

“Either a slow death in a maximum security prison in some hot desert in the US, 30 meters underground, without any human rights, like his youthful friend, his fellow from Caribe Simón Trinidad, or shot down in a confrontation,” wrote Alberto Pinzón Sánchez.

“With this perspective… he returned to arms—this time a little more ‘symbolically,’ in order to accompany with his knowledge, ideas and far-seeing vision, a group of former comrades who shared with him the idea that it was better to die fighting counterinsurgent fascism than kneel before the perfidy and deceptions of the regime.”

RELATED CONTENT: Jesús Santrich: The Laughter of a Bolivarian Cannot Be Easily Extinguished

Death squads kill former guerrillas
Between the signing of the Havana Accords in 2016 and April 2020, at least 271 former FARC guerrillas were murdered by right-wing death squads, along with hundreds of community activists, student leaders, trade unionists, journalists and representatives of the Indigenous and Afro-Colombian communities.

Santrich had seen it before.

As a student activist in the late 1980s and early 1990s, young Seuxis Pausias participated in organizing the Patriotic Union movement, an earlier attempt to transform the decades-long civil war and build a powerful social-justice alternative to the political parties dominated by Colombia’s oligarchy and US imperialism.

Then, too, the response of Colombia’s ruling class, big landlords and US backers was to unleash death squads to exterminate their political opponents.

In fact, Seuxis Pausias’s close friend, a fellow student leader, was one of those executed in 1991. He took the name of his slain friend—Jesús Santrich—in tribute, and left to join the guerrillas.

“Was it necessary to execute a blind revolutionary militant?” asked Argentinian revolutionary Néstor Kohan. “Were the US Pentagon, the Israeli Army and the Colombian Armed Forces so afraid of a blind person who walked with a cane?

“Yes, they were afraid of him. And now that he’s dead… they are going to be even more afraid, because the unwavering example of this communist revolutionary will surely take on other dimensions, as happened in their time with Camilo Torres, Che Guevara and with so many other revolutionaries of Our America.”

In his honor, the Bolivarian Continental Movement has declared May 17 the “International Day of Global Insurgence Against Decadent and Criminal Imperialism.”

Featured image: Commander Jesús Santrich after his release from prison in 2019.