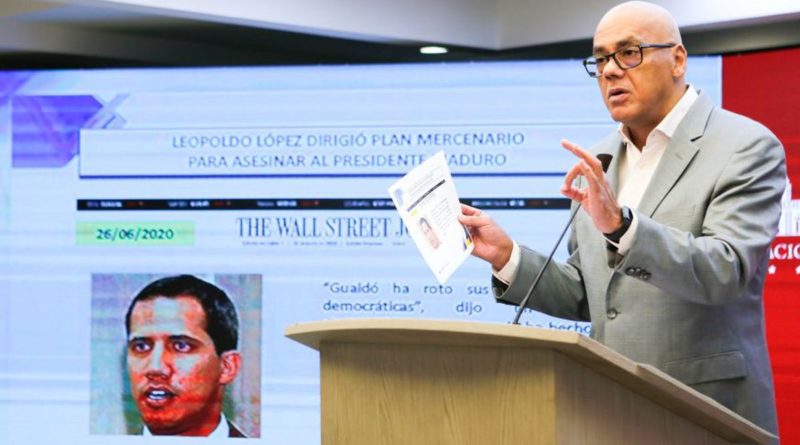 Venezuelan vice president for Communication, Tourism and Culture, Jorge Rodríguez, reported on the piece published by US newspaper Wall Street Journal revealing that Leopoldo López was the leader of the incursion on May 3 and was in charge of the so-called Operation Gideon.

“‘The opposition guru from Venezuela led the attacks to assassinate Maduro,’ is the title of the piece with which the international press once again acknowledges that all the complaints, evidence and videos that the Venezuelan government disclosed regarding the attacks to Venezuela directed from the United States are true,” said Vice President Rodríguez

Rodríguez said that the international media corporations are used in this psychological war against Venezuela, to minimize, deny and distort all the denunciations made by the Venezuelan government.

Then the vice president listed some examples of the effort to try to hide and minimize the denunciations that the Venezuelan government has brought to light with evidence:

He reiterated that Juan Guaidó is nothing more than a puppet of Leopoldo López and both pursue two goals: to steal all the money they can and to seize power by violent means leaving a bloodbath along the way. “Leopoldo López is not a politician, he is a criminal and since 2014 the only thing he has done is to cause deaths, bloodshed and the generation of violence,” said Rodríguez.

RELATED CONTENT: Venezuela Presents a Proposal to the UN for Agreement with Guyana in Essequibo Dispute

The vice president urged the government of Spain to reflect on the activities carried out by Leopoldo López at the headquarters of the residence of the Spanish ambassador in Venezuela, where he claims that acts of violence have been planned.

“Does the government of Spain know that Leopoldo López makes video conferences where he insists on assassinating President Maduro (from the Spanish ambassador residence)? Is that okay with the Spanish ambassador? Does the Spanish ambassador (Jesús Silva) agree, does the Spanish government agree on these meetings being held at their mission, at their headquarters? Where Leopoldo López was evaluating: how many people can you kill, and what about you, how many bombs can you put here, how many bombs can you put there, how much are you going to charge me?” said Rodríguez.
“Up to six companies were researched. In other words, what Jordan Goudreau said was true. They looked for a company called Blackwater, which has a dark history of incursions into Afghanistan, Iraq, and Libya. For some reason Blackwater declined to participate in that operation,” he added.

The work published by The Wall Street Journal indicating that Leopoldo López “was behind a months-long effort to hire mercenaries in order to overthrow” Maduro, which led in early May to a dismantled maritime raid. According to the publication, López and other allies analyzed “at least six proposals” from private mercenary companies.

Leopoldo López has been in the residence of the Spanish ambassador since he escaped from his house arrest during the failed uprising he led on April 30, 2019.