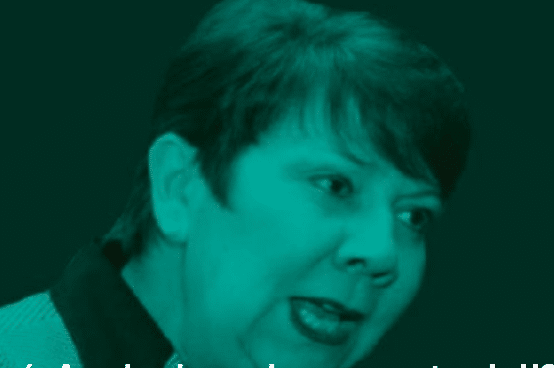 “The bourgeois lady wants you to dress at night and play Canasta with your back to the people.” Alí Primera, Alma Mater

In this way, Alí Primera “El Cantor del Pueblo” warned of the advent of a “caste” of rectors who would exchange “the blue berets for the absurd helmets of a feudal order.” As a prophet he warned about the “bourgeois lady” who would turn “The house that overcomes shadows” (UCV’s moto) into a huge black hole for 12 years. This is Cecilia Carlota García Márquez, better known as Cecilia García Arocha.
Her Wikipedia profile relates an auspicious birth in the “bosom of a ucevista (adjective slang for UCV graduated) home” that would lead her to follow in the footsteps of her father, Dr. Raúl García Arocha, from whom she not only inherited the two surnames with which she is publicly known, but her profession as a dentist. She opted for the academic career becoming the first Dean of the Faculty of Dentistry. She was “fastened” to that post for 11 years until – through a controversial vote – she got the “Jewel of the Crown”: as the rector of the first house of studies in Venezuela, for the period 2008-2012.

Appealing to her political discrepancies with the government of Hugo Chávez and bearing the “defense of university autonomy” as a banner, this self-proclaimed champion of democracy was, on the one hand, postponing the call for elections to renew the university authorities and, on the other hand, the other, rewarding her “hard work” by paying herself the advance of her social benefits in 2012, among other “minutiae”.

In 2014, the opposition student movement of the autonomous universities – including the UCV and its Rector Arocha – had a very active role in the insurrectional movement called La Salida (led by Leopoldo Lopez), which sought to overthrow the government of Nicolás Maduro. While the smoke from the guarimbas was distracting public opinion, Cecilia García Arocha and Genaro Mosquera – director of the UCV Foundation and their personal figurehead – robbed with full hands and enjoyed the economic benefits of having invested the stolen funds in the creation of the University of the Caribbean in Panama.

RELATED CONTENT: Venezuela Presents a Proposal to the UN for Agreement with Guyana in Essequibo Dispute
Political scientist Miguel Jaimes denounced, in several articles while the government kept the billionaires’ budgets for the autonomous universities, the president García Arocha and her group because: “they manage their budget as they please, diverting money, where complete budget parties were lost without anyone crying ( …) University autonomy is one thing, quite another is how from the UCV resources have been diverted to maintain and create private universities within the national territory and in other countries.”
Jaimes also affirmed that the Mosquera – García Arocha duo is inseparable and that the UCV Foundation is “petty cash” for the rector to pay for her personal expenses:

“The UCV Foundation cancels all the tremendous logistics that this lady consumes, the bills are around millions in the meals of the prestigious restaurant El Hato Grill, located on La Salle Avenue, apart from the cost of jewelry, restaurants, family trips, corporate credit cards, large barbecues, and other millionaire wastes made by the rector in the Bahía Shop.”

That same year, Wikileaks declassified cables from the American Embassy where the frequent visits of the “perennial rector” are reported:

“Cecilia García Arocha, Sara Levy and other UCV authorities met with the US Embassy in Caracas, concerned about the Education Law: In August 2009, this statement from the US embassy indicates that Cecilia García Arocha, rector of the UCV ; Sara Levy, dean of the Faculty of Economic and Social Sciences (FACES); and Bernardo Méndez, administrative vice chancellor, were received by the embassy’s Public Affairs Office, where they expressed their concern about the upcoming approval of the Education Law. Levy said that 30% of new university admissions are ‘allocated’ by the government, and do not go through the university’s admission system. Levy told the embassy, “Those students tend to be pro-government, and many are already trained political activists. Levy said that “many have no interest in studying.” Many are not ready for the academic rigor of the UCV, and drop out after a few semesters. “It is a disservice to these students,” said the President. Levy noted that even though UCV students have always been politically active, the difference is that these students come to college after being trained as political activists by groups in favor of President Chávez, without the necessary academic training.”

Between the imaginary government of Guaidó and the Supreme Court (TSJ)

In 2019 – after 7 years without calling elections at the UCV – this “Heroine of Democracy” recognizes with self-proclaimed hype the self-proclaimed President of Venezuela, Juan Guaidó. Immediately, the Aula Magna (UCV’s main concerts hall) became a center of discussion and debate on the “advent of Democracy” once Maduro was overthrown.

In August of that year, the Constitutional Chamber of the Supreme Court of Justice – through sentence 0324 – ordered the temporary suspension of Cecilia García Arocha as rector at the Central University of Venezuela. It also asked for the execution of elections in that house of studies, as well as in 8 other universities. After the ruling of the highest court, our main character stressed that she would not recognize the ruling because her president was Juan Guaidó. However, aware that Guaidó’s interim presidency is only valid in a parallel universe, she appealed the sentence discreetly and the TSJ suspended said precautionary measure months later.

The resignation of the Administrative Vice Chancellor “turns up the fan“

In January of this year, the UCV Administrative Vice-Chancellor, Bernardo Méndez, resigned, alleging acts of corruption by Cecilia García Arocha. Among his reasons, Méndez indicated the dismissal and “inconsult” appointment of heads and directors of dependencies attached to the Administrative Vice-Rector’s Office, in addition to budget availability problems that were not approved by his office.

Another of the situations reported was the appointment of a contracting commission attached to the rectory, despite the fact that this figure already existed in his office. This commission was the one that hired the UCV’s property and vehicle insurance, wardrobe, vacation plans and food tickets for workers, among other things.
Another of the cases specified by the former administrative vice chancellor was that of the UCV Institute of Social Security for Teachers with self-administered insurance Samhoi. The resources were approved after the study of reports presented by a commission made up of the rector, the administrative vice-rector, a member appointed by the Apucv (professors’ association) and another appointed by the University Council. In July 2019 the last report was approved by the rest of the authorities.
Méndez said this is because the Rectorate appointed a new team to calculate these payment amounts to be disbursed by the UCV, and a new way of calculating the currencies to be compensated was applied “unilaterally”, which generated new debts in bolivars that did not exist.

“But we will save you in spite of your enemies, those from outside and those from within. But you will be saved,” Ali Primera.

On June 17, the ceiling of the corridor in front of the Faculty of Humanities and Education of the University City of Caracas collapsed, a space recognized by Unesco as a World Heritage Site since 2000. Soon the information went viral on social networks.

García Arocha and her “groupies” claimed the incident was due to the “budgetary suffocation” exerted by the Maduro government that does not allow the proper maintenance of the campus, which in recent years has been more like a post-apocalyptic ruin than the jewel of integration of the arts that Carlos Raúl Villanueva (UCV’s campus architect) left to the country. Her detractors blame her for the blatant thievery of the governing authorities.
That same day, the Minister of University Education, César Trompiz, attended the scene together with personnel from the Venezuela Bella Mission, to inspect the affected area. The rector welcomed him with open arms in a scene that will remain for history.