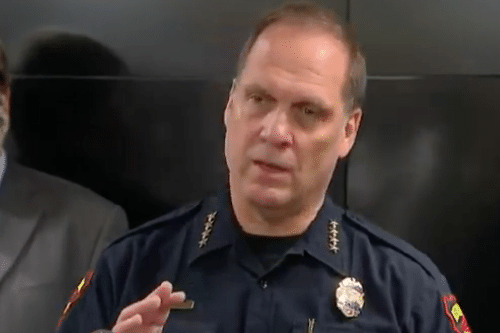 On Wednesday, 17-year-old Kyle Rittenhouse was arrested in Illinois on charges of first-degree murder after allegedly shooting and killing two protesters the night before during protests in Kenosha, Wisconsin, in response to the shooting of Jacob Blake earlier this week.

During the Kenosha Police Department’s first press conference in response to the Blake shooting and subsequent protests, Chief Daniel Miskinis blamed the unidentified victims in Tuesday night’s shooting for their own deaths, saying the violence was the result of the “persons” involved violating curfew:

Persons who were out after the curfew became engaged in some type of disturbance, and persons were shot. Everybody involved was out after the curfew. I’m not going to make a great deal of that, but the point is the curfew is in place to protect. Had persons not been out involved in violation of that, perhaps the situation that unfolded would not have happened.

Kenosha Police Chief Miskinis responds to the murder of two protestors by saying it wouldn't have happened if people weren't out after curfew: "I'm not gonna make a great deal of it, BUT …" pic.twitter.com/GBRo8I5Zka

“It is the persons who were involved after the legal time, involved in illegal activity, that brought violence to this community,” Miskinis added later, seeming to blame protesters who were on the streets because a member of Miskinis’ department, who was identified late on Wednesday as Officer Rusten Sheskey, shot Blake seven times in the back as his children watched. *

Miskinis would not give the names of the “persons” who were the victims of Wednesday’s murders, but did say they were “a 26-year-old Silver Lake resident and a 36-year-old Kenosha resident.”

In describing the shooting of two protesters, Miskinis also declined to call it a homicide and instead referred to it by various euphemisms often used to describe killings by a police officer, which Rittenhouse is not. He said that the shooter “was involved in the use of firearms to resolve whatever conflict was in place” and that there was a “disturbance that led to the use of deadly force.”

Additionally, Miskinis refused to comment on the video of Blake’s shooting, but offered that there may have been a reasonable explanation for the man being shot seven times in the back, which has reportedly left him paralyzed and in critical condition. (The officer has been put on administrative leave and has not been fired or arrested.)

“I’m not going to address that because it is one snippet of a very large situation and much as what’s happened across this nation for a long period of time, it’s focused on what you see in this much of an incident,” Miskinis said, apparently alluding to other police shootings of unarmed Black men. “It’s unfair to everybody involved, whether you’re the person using force or the person being arrested that the picture isn’t painted.”

Video taken on Tuesday before the shooting showed Rittenhouse gathered with what appeared to be members of armed militia groups. Those vigilante groups had gathered on Tuesday night, it was reported by CNN and the Verge, in response to calls on Facebook for “any patriots willing to take up arms and defend our city tonight from the evil thugs.”

When asked about the vigilante groups, Miskinis defended them as civilians out to protect property and “exercise their constitutional right.”

“Across this nation there have been armed civilians who have come out to exercise their constitutional right and to potentially protect property,” he said. “Am I aware that groups exist? Yes, but they weren’t invited to come.”

Miskinis’ views of the gathering of vigilante groups that reportedly led to the killing of two local men appears to be very much in line with those of his department. Before the shooting, officers in armored vehicles could be seen giving water to armed men gathered with the alleged shooter and telling them, “We appreciate you guys, we really do.” After the killings, the alleged shooter walked slowly past a series of police vehicles with his arms raised and was allowed to simply walk away. (It’s not yet clear what the officers knew about the shooting at the time, but the shots were audible in nearby footage.)

When asked why his officers had given the armed men water and thanked them, Miskinis said, “Our deputies would toss a water to anybody” and “You’re asking me to tell you what one person did. I can’t tell you that.” In explaining why his officers were able to show such restraint with Tuesday’s shooter, he blamed the “high stress” situation on the scene and possible “tunnel vision” on the part of his officers.

“I’m not making an excuse. I’m just telling you from personal experience what could have done that,” he said.

Toward the end of his comments, Miskinis was asked about the vigilante groups and again compared them to the protesters who had violated curfew, saying both sides were to blame.

“It’s no different than those on the protesters’ side who are walking around armed and those who are counterprotesters, or those who are just witnessing, to be armed, so I’m not going to address any more issues relative to that,” he said.

When asked if he wanted the vigilante groups to be present again after Wednesday night’s curfew, Miskinis refused to reply.

“I just said I’m not going to answer any more questions,” he said.

When asked again, he again refused to say. “I’m done talking about that,” Miskinis said.

At the end of the press conference, Kenosha Mayor John Antaramian clarified whether the city wanted armed vigilante groups patrolling the street after the killing of two civilians. “No, I don’t need more guns on the street in the community,” he said.