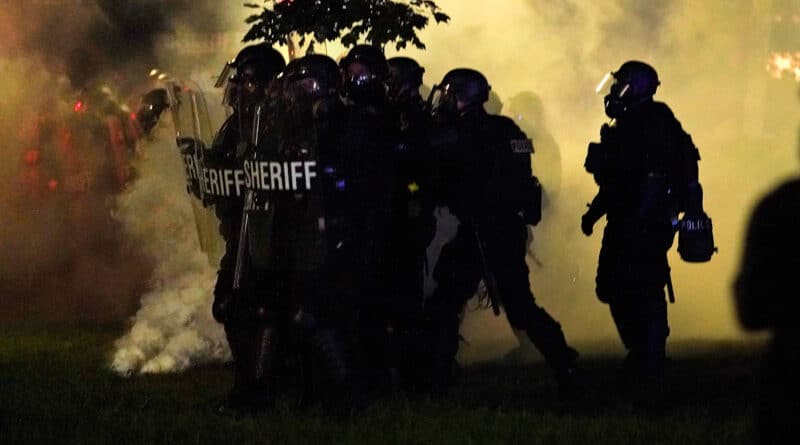 Coordination between police and far-right groups is far from abnormal but as yesterday’s killings show, it is becoming much more dangerous.

Three people were shot and two died last night in Keshona, Wis, as right-wing militias hit the streets, shooting demonstrators protesting the police shooting of Jacob Blake on Sunday. After two nights of angry demonstrations, Wisconsin Governor Tony Evers, who originally described the event as a “merciless” act of police cruelty, called in the National Guard and declared a state of emergency. However, along with the National Guard came large numbers of right-wing militia groups, existing relatively harmoniously with law enforcement. Far-right news organizations and websites had earlier signal boosted the Kenosha Guard militia’s call for reinforcements to come to “protect lives and property.”

Last night’s killings were filmed and immediately posted on social media. In one video, protesters fight with an armed militiaman, who fires at three people at point blank range, killing two. He then hurries from the scene, “repeating “I just killed someone,” retreating back towards police lines, still carrying his rifle. Even as the crowd shout to the police that the killer is coming towards them, they ignore him, instead instructing the protesters to get out of the way.

The shooter has been widely identified as a 17-year-old boy. From his public Facebook page, it is clear that he idolizes the police, his profile picture being a “Blue Lives Matter” logo with him in the center, holding a rifle. Virtually every post he made is about either the police or guns. As of Wednesday morning, he is still at large. Footage taken earlier in the night shows the teenager bragging that he and his crew “don’t have non-lethal” ammunition with them.

RELATED CONTENT: State of Emergency Declared in Wisconsin After Two Nights of Violence

This photo makes me want to make a very distasteful trauma-joke about school shooters so instead I’m gonna log off for real. pic.twitter.com/6qDEjGZQp1

Another video shows them fraternizing with heavily militarized police, who offer them water and tell him “we appreciate you guys, we really do,” evidence which might explain why he was neither shot nor even arrested after killing two people right in front of dozens of law enforcement officers.

Kyle Rittenhouse is from Antioch, Illinois, He would be considered an outside agitator because he lives 30 minutes from Kenosha, WI. With his mom. #KenoshaShooting #MorningJoe pic.twitter.com/xTwbUJIzGe

Speaking about the shooting, Lieutenant Governor of the State of Wisconsin, Mandela Barnes said that “we can’t even act surprised that this happened.” Barnes said that it had become normal to see heavily armed militia in public, adding,

RELATED CONTENT: State of Emergency Declared in Wisconsin After Two Nights of Violence

Not an isolated incident

Coordination between police and far-right groups is far from abnormal. During the George Floyd protests, Oregon police associated with groups such as the Proud Boys, video showing one officer asking the group to hide in a building because they were about to start gassing protesters, but to do it “discreetly,” as they did not want to be seen as “playing favorites.” Another Oregon officer was caught on camera flashing the “White Power” hand gesture at right-wing counter demonstrators.

In June, a Seattle man drove his car at high speed into anti-racist protesters, opening fire at the crowd. He then calmly leaves his vehicle and walks over to police lines, where they shield him, turning their backs on the armed killer to face the crowd. That they appeared totally unconcerned at this is a sign of how confident they were that they were in no danger. As activist news outlet It’s Going Down noted, “Such a relationship allows the police to use far-right groups as an auxiliary force against social movements.”

A study published last year by Injustice Watch found that 20 percent of police officers nationwide have shared egregiously racist material or content glorifying police violence against protesters on their public Facebook accounts. This figure rises to 40 percent of retired cops. Rarely is any action taken against officers sharing this content. On the other hand, a Massachusetts officer was recently fired for sharing a pro-Black Lives Matter social media post.

The shooting of Jacob Blake

The events of last night were sparked by an incident on Sunday, where an unarmed black man, Jacob Blake, was shot from point blank range in the back at least seven times by police officers, the shooting occurring in front of his friends and children. Miraculously, Blake survived but is now paralyzed after one bullet severed his spinal column. Blake’s father, also called Jacob, wept as he described the incident as “senseless attempted murder,” and said he had no faith that the police officers involved would be held to justice. The suspects are currently on administrative leave, a status which amounts to a paid vacation.
The shooting was denounced by a great number of human and civil rights groups. The American Civil Liberties Union, for instance, described it as a “disgusting act of police brutality.” “With each of the seven shots fired, police made their intent clear—they believed they had the right to kill an unarmed Black man for the crime of walking away from them,” said Jeffery Robinson, director of the ACLU’s Trone Center for Justice and Equality. Seeing as the teenage militiaman has not even been apprehended, it appears far-right groups might also be able to kill with impunity in Trump’s America.