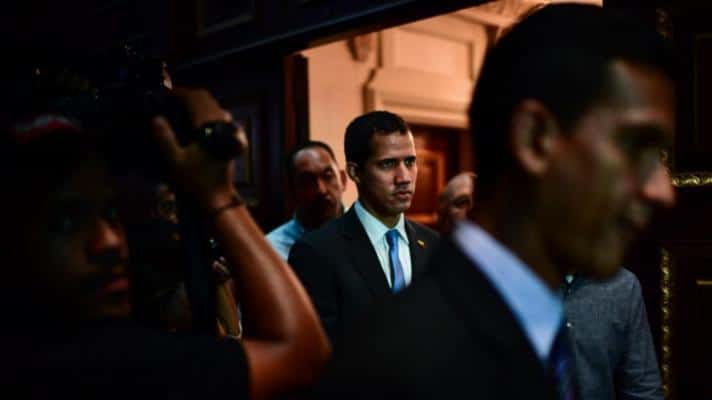 On May 11, the fake government of Juan Guaidó launched the so-called “National Salvation Agreement,” a sort of unified approach to “recover the country’s democracy,” escape from the complex humanitarian crisis, and use the support of the international community to achieve these goals.

With this, the former deputy for La Guaira state seeks to revive his damaged image, in decline since mid-2019 and definitively tarnished with the election of the new National Assembly.

With the renewal of the Legislative Power, Guaidó ceased to maintain the only link that associated him with state power. For a long time his fictitious government was only supported virtually by the media, the United States government and some of its satellites, and that has also been diminishing.

But beyond this new attempt at survival in the national political scene, it is necessary to ask ourselves: is this not a reissue of the old refrain “cessation of usurpation, transitional government, and free elections,” which also passed into oblivion?

Another scam of the Guaidó clan?
In a video released on the day of the launch, Guaidó referred to the importance of seeking “realistic and viable” solutions to the situation in Venezuela. The proposal was based on the call for free elections, and the massive entry of “humanitarian aid,” according to him, to “recover democracy.”

But the reality is that the former congressman does not even have the power to unite the extremists within the Venezuelan opposition, and he would have less power to seek those viable solutions that he mentions.

On the other hand, he assures that the interim government, the National Assembly and the unitary platform would participate in this lifesaving plan, in addition to the government of President Maduro and the international community.

Democracy and free elections
Regarding the first item, free and fair elections, Guaidó said that it was necessary to call a schedule of free and fair elections in the country. This demand is unconstitutional because, according to the calendar of the National Electoral Council (CNE), general elections have not been planned and so far they have complied with the provisions: the parliamentary elections were held in December of last year and the regional elections are scheduled for November this year.

The truth is that the sector that still associates with former deputy Guaidó has been left out of the democratic process by its own free will, even when all the guarantees of transparency were offered.

Let us remember that Venezuela is open to international electoral observers as long as they do not intend to interfere in the internal affairs of the country. The Venezuelan opposition that does not follow the US agenda participated in the parliamentary elections and has considered joining a national dialogue without this signifying compliance with President Maduro’s policies.

Humanitarian aid and massive influx of vaccines
Regarding the “humanitarian aid” and the entry of vaccines to the country, it was the declaration of a false presidency that sparked any need for humanitarian aid and COVID-19 vaccines in the first place. Likewise, Guaidó used as a rallying point the “few vaccines” that the Bolivarian Government has managed, the collapse of the health system, the shortage of supplies and the lack of medical personnel, among others.

We must remember that the Guaidó clan became even more tarnished when the COVID-19 pandemic hit. The Maduro government assumed the management of the pandemic policies, implementing relatively effective measures to stop the advance of the disease, the effects of which can be seen in global statistics where the number of infected and deaths is reflected. This was done despite the evident deterioration of the health system as a result of the economic and financial blockade promoted by the (anti) political sector that Guaidó represents.

Meanwhile, Guaidó would eventually appear on social media giving orders and offering help that never materialized. His caricaturing was even more conspicuous since his actions as a “government” were limited to paying lip service to the measures that President Maduro was promoting.

It is also necessary to recall that Juan Guaidó sought prominence when the Bolivarian Government rejected the entry of the AstraZeneca vaccine through the COVAX mechanism due to the record of irregularities and fraud of that pharmaceutical company, in addition to its use being suspended in several countries of the European Union (EU) and other parts of the world, for being linked to several blood-clotting deaths shortly after its application.

“Days before the PAHO announcement about the COVAX mechanism and the questionable AstraZeneca vaccine, Juan Guaidó and his court of criminals rolled out the news of the supposed ‘agreement’ to buy vaccines,” wrote Misión Verdad in an earlier investigation. “They played an advanced position, taking into account that the Bolivarian Government had already decided not to rely on the doses from the British company.”

It was all an orchestrated operation to manipulate the health crisis and project the narrative that the Chavista government was again preventing the entry of “humanitarian aid.” Attempts were made to use the UN mechanism to extort and blackmail an already blockaded country. If at that time when he was still a deputy, he could not manage something for the nation, using the supposed “power” he had and the “support” of the international community, now that he does not have the same support and legally does not have any official post—even in an outlaw institution on account of US strategy—it is less likely to do so today.

The organization that has managed the entry of vaccines into Venezuela has been the government of President Maduro, which has had to overcome all kinds of obstacles to achieve this. Even during the pandemic the imperial blockade has not ceased, so the Bolivarian Government has had to triangulate with Russia, China and Cuba for the entry of vaccines, medical supplies, and everything necessary to contain the pandemic.

End of the migration crisis
The other great promise of the “National Salvation Agreement” is to end the migration crisis, a narrative which the Guaidó clan, the United States government, and the NGOs linked to its influence. have collaborated to create, as one of their greatest corruption schemes.

In recent years, scandalous figures that border on the absurd have been used, without any support, to justify the illegal entry of resources, the distribution of thousands of dollars to Non-Governmental Organizations and the use of illegal unilateral coercive measures by the United States.

It has become one of the most frequently played wild cards every time there is a political objective against the Bolivarian Revolution or when they seek to capitalize on more resources.

Recently, media corporations such as Fox News, Daily Caller, LMTonline, Reuters, among others, carried out extensive coverage on Venezuelan migrants who crossed the Rio Grande to reach the United States, a symbol of the freedom of those who escaped from the “Chavista tyranny.”

The Sures organization, which follows the issue of Venezuelan migration in detail, explained the contradictions of the scenes broadcast in Río Bravo “which differed from the typical conditions of… Central American migrants, the most frequent  travelers on that route”:

• They crossed during the day and under the eye of the cameras, even though it is an illegal passage for thousands of Central Americans who are arrested each year by the authorities of the North American country.

• They do not appear as the usual migrants looking for a better future, but as tourists who are going on vacation.

• They do not seem to have traveled long land journeys like the rest of the migrant populations, who suffer long hours in the open and in conditions that violate their human rights, details that are not reported by these media channels.

• The Border Patrol is receptive and does not present much resistance to the arrival of these migrants.

This staging was carried out within the context of the “International Conference of Donors in Solidarity with Venezuelan Refugees and Migrants, which took place on June 17, and situated the approach of the Venezuelan government as a focus of attack by the Biden administration, within the framework of the call for national dialogue issued by President Nicolás Maduro,” wrote Misión Verdad.

During the false interim government, the issue of migration was always treated as an exploitable resource with which to attack the Venezuelan authorities and obtain resources from US offices such as USAID. From the supposed powers there was never any political will to offer solutions to a migration that—beyond the large numbers that are shown intermittently on the websites of NGOs, human rights organizations and US offices—is real, and the product of the blockade promoted by the sector still supporting Guaidó.

However, it is not just a matter of will. It is assumed that the self-proclaimed (Guaidó) would have been perceived by the other presidents of the region as their counterpart in a corresponding political position and thus could, in theory, manage the necessary actions to serve migrants.

But as we have noted throughout this article, that foreign base of support was also lost. Not even the United States, the main executor of the imperialist blockade against the country, saw in Guaidó a counterpart. On the contrary, he was a pawn whose function was limited to endorsing the dispossession of Venezuelan assets abroad without being able to make decisions regarding them.

The Guaidó clan in its labyrinth: time is running out
Recently, the former deputy announced that a committee of Venezuelan opposition politicians would travel to Washington and Brussels “to seek support and consult their allies on their positions in the event of a possible lifting of sanctions.”

As reported by Reuters, they would seek to establish a dialogue with the government of President Nicolás Maduro:

“We will discuss with our allies a framework under which they feel comfortable, for example, with the progressive lifting of sanctions based on (the government’s) compliance with an agreement,” Guaidó said on that occasion .

This reappearance of the usurper takes place in a context in which the main actors in the blockade against Venezuela (the United States, Canada and the European Union) seek to open the possibilities of “‘reviewing’ the coercive measures against the country, threatening to sustain the pressures in exchange for concessions in the Venezuelan sphere,” we recently concluded in Misión Verdad.

This possibility of a détente is provided not so much to seek a way out of the crisis that these same authors caused with illegal “sanctions,” but because in this long race of pressure and wear and tear, the expected total collapse never came—Maduro’s government resisted the pressure and Guaidó and his “interim government” were diluted.

The truth is that the supposed “National Salvation Agreement” does not enjoy autonomy either, and it seems to be a resource to keep alive the voice of a fake government, which has been slowly fading. The dilution of its presence in the events that mark the possible solution to the Venezuelan crisis is another proof of the failure of those who banked on the parallel government.

It is worth remembering that the already diminished support for the figure of Juan Guaidó has an expiration date; Washington established that its support would last until December. According to PanAm Post, the decision was made by Joe Biden’s administration, and passed on by the virtual ambassador for Venezuela, James Story, after a meeting with the so-called G4 (Venezuela’s extreme-right political parties) that took place in Bogotá.

That is why any action taken by the fake government can be assumed as a part of the death rattle of a Venezuelan political sector that embodies one of the darkest periods for the Republic.

Featured image: The end of the Guaidó clan is approaching without having been able to force the departure of Chavismo (Photo: AFP).