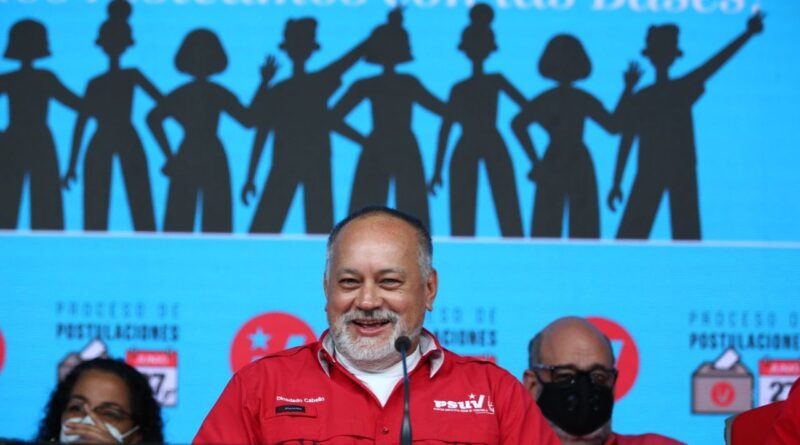 This Sunday, June 27, the first vice president of the United Socialist Party of Venezuela (PSUV), Diosdado Cabello, informed through his Instagram account @mazo4f that the nomination process for candidates for the mega-elections of November 21 has been carried out in a transparent manner with a high turnout and spirit.

From the counting center of the PSUV primaries nomination process, Cabello praised the high participation of the party’s  revolutionary membership in the voting. “People have realized the purity of this process, the greatness of this process, and haveattended en masse to make their nominations and to support the nominations,” said Cabello.

Likewise, Cabello reiterated that there has been no pressure on anyone in regard to the applications. ”What we see here is the will of the people, the will of Hugo Chávez’s party to go to a consultation and for the rank and file to decide who will be their candidates” to participate in the 21N mega regional elections.

In an unprecedented exercise of internal democracy, the PSUV has conducted this first phase of primary elections in order to receive nominations by any party member, and particularly from the local party units of the bases, the Bolívar-Chávez Battle Units (UBCH). The party will evaluate all the applications with the UBCHs, and using various formulas will choose the frontrunners for the primaries that are going to be held in August and will be organized—according to Venezuelan law—by the National Electoral Council (CNE) using another unprecedented style: all voters (PSUV members or not) will be able to participate in the primaries.

According to preliminary estimates, over 3 thousand posts will be up for contest in the regional and local elections of November 21—23 governorships, 335 mayoral positions, posts in the legislative councils that would involve at least 251 seats in the 23 state parliaments, and about 2,500 council seats. In these calculations, the positions amount to 3,109 for four types of authorities or organizations: governors, mayors, legislative councils and municipal councils.

According to experts, the democratic approach of the PSUV to hold these primaries is based on the peaceful political environment that Venezuela has witnessed in recent months, and it is aimed at making the entire PSUV leadership to be more connected to the bases in order to grow the relationship wherever it is lacking.

Cabello also reminded the PSUV membership that the primary elections will be held on August 8 to select the candidates from those who are elected in this nomination process. ”It is for you to decide; it is in your hands,” stressed Cabello. ”You are the ones who will decide for whom you are going to vote, who you are going to nominate and who you are going to support.”

”This Party was born from the democratic forces that get strengthened every day by practicing internal democracy,” added the PSUV first vice president.

Press conference
At late night this Sunday, Diosdado Cabello presented the preliminary results of the nomination process at a press conference. The PSUV leader informed that by that time, with 30% of the ballots counted, the party had received 26,396 nominations.

He also informed that the final results will be presented on Monday, adding that out of the candidates for governors already processed, 2,361 where women and 1,232 were men. PSUV is putting a special enphasis on gender parity in order to have greater representation of women leaders in higher responsibility posts.

During the press conference President Nicolás Maduro made a phone call expressing his satisfaction for the high turnout, especially of the PSUV youth bases. Cabello remarked that the PSUV is the only political party in Venezuela with the democratic stature and the strength to carry out such a complex exercise of democracy.