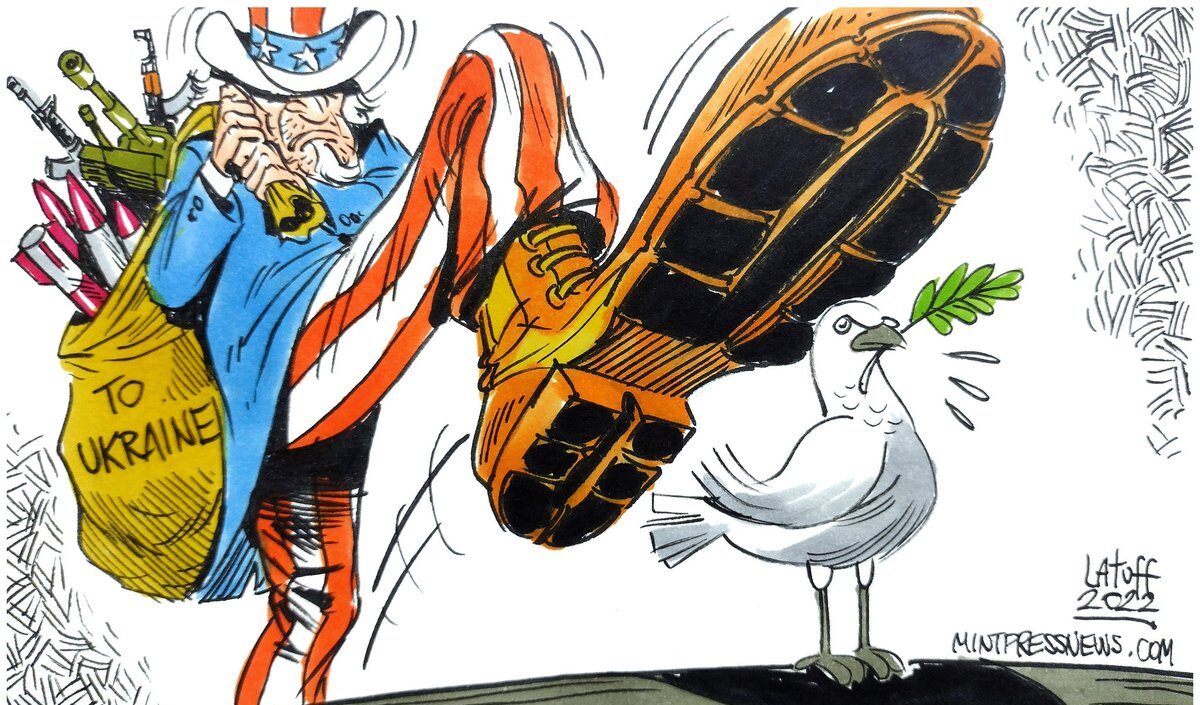 Cartoon depicting US Imperialism and how it destroys peace. File photo.

[The following is a slightly expanded version of a talk given by Camila Escalante to an online forum of the International Manifesto Group on August 7, 2022. The topic of the forum was ‘The conflict over Ukraine: Where should the left stand?

On August 6 we celebrated 197 years of independence here in Bolivia. We listened intently to the speech by President Luis Arce delivered in Sucre, the capital city in Bolivia’s Chiquisaca department. Among other issues, he spoke about the current military conflict in Ukraine and the need for peace in today’s world.

President Arce said there cannot be peace in the world so long as there is continued foreign military intervention and economic blockades and sanctions, so very painful to humanity. He went on to say that Bolivians are placing much attention on the conflict taking place in Ukraine. He cautioned against the propaganda being generated in Western countries about all of the harm and violence that people are suffering as a consequence of this conflict.

He also reminded his listeners that we in Latin America have been plagued with intervention, war, bombings and deaths for generations right here in our lands and territories as the United States continues to apply its anachronistic ‘Monroe Doctrine’. First the colonialists and then the imperialists have imposed this doctrine for hundreds of years, long before the current conflict in Ukraine began in February of this year. [You can view a brief excerpt of the August 6 speech by Luis Arce, here.]

Matters could not be clearer than they are today here in Latin America. One consequence of the conflict in Ukraine has been to reveal exactly who is on the side of a more just and equitable world, and who opposes that.

Sadly, in the Western countries, many left-wing and other progressive voices have been terribly confused about events. They are blaming Russia for the conflict, calling for its withdrawal from Ukraine, which at the present time amounts to a call for Russian surrender to NATO.

They are calling for ‘diplomacy’ instead of war, ignoring the fact that it is the U.S., NATO and Kyiv who have turned their backs on diplomacy. They ignore the long history of the conflict in Donbas in which Russia has ultimately been obliged to intervene in order to defend the people of that region against Ukraine military attacks and in order to resist the military and economic encroachment upon Russia’s borders by the NATO powers.

Many alleged anti-imperialists in Western countries have dismissed the positions on Ukraine-Russia taken by anti-imperialist parties, social movements and revolutionary leaders here in Latin America and the Caribbean. They ignore the fact that we, here in the Global South, in Latin America and the Caribbean, are obliged to fight every day to defend our lands and natural resources against imperialist plunder. This is becoming clearer and clearer by the day.

Latin America and the Ukraine War

Leaders such as Evo Morales of Bolivia and President Nicolas Maduro of Venezuela were the first out of the gates earlier this year to call for an end to imperialist NATO’s continued expansion efforts. They have warned of the dangers of the extremist, far-right, white supremacist neo-Nazi forces in Ukraine that are being defended, protected and uplifted by countries in Europe and North America and by imperialists and fascists all over the world.

Evo Morales issued a call in July for an international campaign in favour of the abolition of NATO.

So I would say that there is, in fact, a consistent left-wing position here in Latin America, in contrast to the incoherent and inconsistent stances taken by too many in the global north. That consistent position continues to oppose NATO imperialist expansion and any new, manufactured pretexts for encroaching on our territories with new U.S. military bases. I am thinking, in particular, of the ‘SOUTHCOM’ military command for Latin America of the United States, located in Florida. It can be viewed as the representation of NATO on our continent. Neither Russia and China, nor any other country in the world, has a presence anywhere remotely comparable to what the United States has all around our continent, particularly in Colombia where there are seven active U.S. military bases right now.

Coincidentally, on August 7, Colombia celebrated the inauguration of left-wing President Gustavo Petro and Vice-President Francia Marquez. It’s a very important date, a very momentous time for us. Their election on May 29 is an historic achievement for the people of Colombia.

Finally, we have seen the outgoing president Ivan Duque out the door. But he had welcomed NATO and the U.S. military to establish itself permanently in our continent and it is going to be very difficult to get rid of them.

Our position is also against additional plundering of our natural resources and the dismantling and privatization of our strategic nationalized industries.

Juan Ramon Quintana was a former minister of the Evo Morales government and he’s given several talks to social movements here in Bolivia to try to help bring clarity to the conflict and geopolitical situation in and around Ukraine. At a talk at the headquarters of the Six Federations of the Trópico of Cochabamba in March, he said, “The West, the European Union, the United States, NATO–what they’re trying to do is survive through their political, economic, financial and cultural crisis because the West has not given any answer to humanity. The West today is synonymous with war, destruction, weapons, atomic arsenals.”

Quintana asks, “What is the culture of the West? We are coming from 500 years of colonial violence—our ears have been mutilated, our noses and hands cut off, our bodies dismembered. That is what has been left with us, comrades. This is a culture of destroying nature and Mother Earth. It doesn’t cease in its compulsive, materialistic appetite to wage war, to appropriate other people’s strategic resources.”

Investment projects involving companies from Russia and China do exist. However, what we see there is cooperation among equals. As far back as July 2014, Russian president Vladimir Putin made an official visit to Cuba where he confirmed an agreement between the two countries in which the financial debt owed to Russia by Cuba stemming from the years of cooperation between Cuba and the Soviet Union was officially canceled.

Imagine—$32 billion in debt cancelled by common agreement! No wonder the Western imperialists wish to weaken if not crush Russia and such ‘bad examples’ of its cooperation with other countries!

It is absurd to even point all this out, considering the massive presence of Canadian, U.S. and European mining companies in our continent and the long list of their blatant meddling in our internal affairs of the countries. We know too well the well-documented coups they have waged and their funding of political opposition groups, which is ongoing, notably in Cuba, Nicaragua, Venezuela and Bolivia.

It is blatantly obvious what has been happening with the global energy crisis. The U.S. is currently searching for oil supplies and trying to barter access to them. It is once again descending on Caracas and on every other country in the region that has energy, including Suriname, Trinidad and Tobago, and Guyana. It’s very clear what this is all about.

New pretexts are being created to come in and swoop up our resources. If you listen to any of the press conferences, speaking events, interviews or statements by SOUTHCOM and its commander, General Laura Richardson, you will see that they are very clear about their fascination and obsession with exploiting our rare minerals, our rocks, everything we have here, in what they still continue to consider their backyard.

We’re witnessing a witch hunt in our region in which Washington is saying either you are with the U.S., NATO and the West, or you’re against us. That’s the choice that they’re giving us. Anyone who tries to be ‘neutral’ in these global conditions is placed into a category of being ‘pro-Russia’. They become subject to U.S. blackmail, intimidation and other pressures. These take the form of blocking loans and imposing new additional sanctions, as we see so clearly with countries that are closest to Russia, China, and Iran, namely Nicaragua, Venezuela and Cuba.

Meanwhile, no one is sanctioning the U.S. or the EU for their plundering wars or their violent crimes against humanity and war crimes in the Middle East.

Beyond inflation, the loss of access to inputs for production, and the various other ways in which our productive sectors and industries are being affected here—beyond the harsh economic effects on the working class of the Caribbean and Latin America and how difficult it is for people to access and afford fuel and food—we face the real threat of increased militarization and hostility towards our peoples and governments because we are rejecting and confronting imperialist policies.

We are seeing increased hostility and new attempts at destabilization against those countries which are choosing to reject the NATO propaganda and partner with, develop with, and move forward and advance with China, Russia and Iran. The most important consequence of this conflict for our region is this greater pressure by the Western countries for the looting of our natural strategic resources, our oil, our gas, our minerals, our lithium. They couldn’t be more overt about it.

This is radicalizing people here. And the situation has nothing to do with ‘democracy’ or ‘human rights’. It is about the expansion of NATO countries into other territories to grab resources in a system that maintains our populations in permanent servitude, absolute terror and tyranny by the imperialist north.

All this is being rejected and it’s due time that the people of the North understand and learn why.