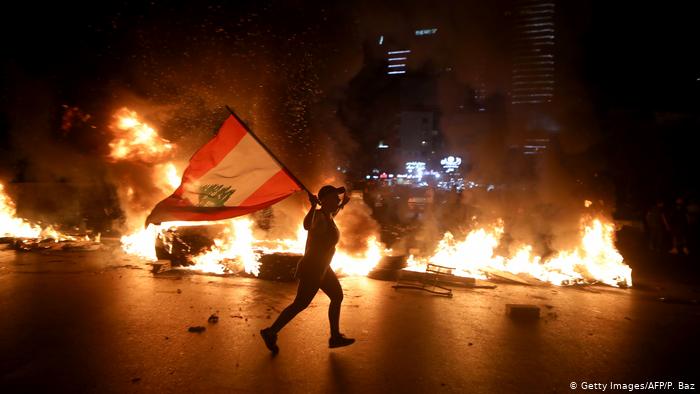 Lebanon a country in collapse

When did the economic crisis in Lebanon start -is it part of the economic cycle or something else – who gains and who losesfrom the destabilization of Lebanon and why.?

The economic collapse being witnessed in Lebanon today can be traced back to the 1990’s As part of the peace process, the Lebanese government borrowed monies from some of the privately owned Lebanese Banks many of which had connections to those very same politicians Those loans were approved to rebuild the infrastructure and the economy To financially steady society, embed the peace process and help Lebanon to stabilise politically economically and militarily.

A new era of hope was born

This birth became stillborn when portions of these monies were not invested in the economy to rebuild society but redirected through corruption through a political Mafiosa into private corporations invisible projects and fake companies.A beautiful chance for a new future was squandered.

The monies stolen from public projects inevitably led to a continued stagnation of the economy. The money meant to stimulate progress vanished.The economy in parts shrank while the debt repayments continued to grow.

If you borrow money to invest in growth and do not actually invest that money then economic collapse is only a matter of time.

Politicians borrowing private finance to promote public spending embezzled the money for their own self-aggrandisement inevitably lead to a breakdown in the economy with its knock-on effect in society.

Increasing levels of unemployment poverty and disillusionment with the government created demands for change Demands for an end to the system that led Lebanon to become an economic basket case.

The losers in all this state incompetence greed and avarice are the people of Lebanon.

The poor the unemployed the families struggling to cope, the young the old, indeed every facet of a society that relies on a stable currency, stable food fuel utility prices and a stable government. With unemployment rising, food and fuel prices rocketing and the Lebanese Lira devaluating against the Dollar the people are suffering greatly Many can not afford the basic necessities as inflation spirals out of control.

Those who gain from the destabilization in Lebanon are those who may be playing an active part in destroying the value of the Lira and fomenting civil disorder.

The Lebanese government was encouraged by America and others to borrow private finance to rebuild a nation.

This incurs debt and enslaves the people via the government to the banking system.

The misappropriation of these funds has led to no new tax revenue for the government.

The debts incurred have robbed the government of an opportunity to extricate itself from this impasse.

The private banking system in Lebanon stands accused of working in the interests not of the Lebanese people but of international finance and in alignment with American Israeli foreign policy in the region.

The banking cartel along with the American administrations political rhetoric are vehemently opposed to any closer ties between Lebanon and any other governments in the region or internationally.

China has offered to build new overground and underground rail links to rebuild the Lebanese infrastructure To complete public works and invest in the industrial economy of Lebanon.

Russia has offered to rearm the Lebanese military which Israel and America want to see weakened neutered and marginalised.

Syria has offered to supply electricity to Lebanon which is currently experiencing regular disruption of service due to acute fuel shortages.

Iraq has offered fuel and Iran is willing to help if required.

RELATED CONTENT: The Caesar Act: The Latest Western Attack on Syria Didn’t Drop From a Plane

From the illegal Israeli occupation of Lebanon, through the fight for national liberation and the ongoing reverberations of the civil war, stoked financed and armed by the west, Lebanon has had numerous obstacles to overcome.The resistance is now part of a democratically elected government.National reconciliation has been achieved on many levels.

The people of Lebanon have come together to build a new future.A future which the Israeli and American administrations wish to pervert.

The view from Beirut appears to see a concerted attempt to starve the people, cripple the economy, provoke and encourage dissent and dissatisfaction with government in order to reignite the civil war To distance the resistance from the government and create a compliant pro Israeli western facing pro American government to bow the knee to their colonial imperialist aspirations in the region.

Will war be the outcome?

If it is war it will not be internal to Lebanon The people have seen these external machinations for what they are.

There may be a war but that war could be against the continuing Israeli violations of Lebanese air space as it attacks Syria in its continued undeclared war and the eternal interference by Israel in Lebanese internal politics.

Will the Lebanese allow Israel to steal its offshore oil and gas resources ?

The price of forcing Lebanese compliance to foreign imperialist designs could be a war.

We may witness closer cooperation with those who are offering help to Lebanon, Iraq Iran Russia China and Syria running parallel to a renewed conflict with Israel.