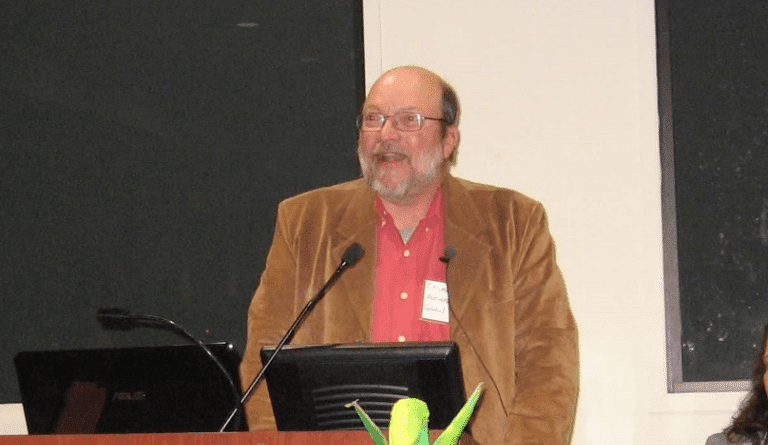 I continue to be deeply saddened by the loss of Chuck Kaufman. I knew he had health problems, but still, he seemed like someone who would, or should, be with us forever.

I’ve known Chuck since a visit to the Nicaragua Network office in DC – way back, maybe 87 or 88 – I remember thinking he was very humble at the time.

After that I didn’t have much contact with him until the US-sponsored coup attempt in 2018. I wrote a synopsis of what went on over a 24-hour period in May and he asked me to co-edit NicaNotes with him.

From that point on we have published dozens of writers and investigations that share solid facts about Nicaragua that show it has been an amazing example since 2007. The articles also prove unquestionably that the United States has continually attempted to destabilize Nicaragua and even overthrow its democratically elected government since the Sandinistas returned to the presidency in 2007, really, simply because they are the threat of a good example – as Chuck always reminded us.

The body of articles published in NicaNotes during the last 43 months is impressive. It is exciting that we have new writers bringing their own voices to the work of letting people know the reality of Nicaragua.

Then with Chuck’s work load and health issues we talked a few times and I was honored to become the sole NicaNotes editor. I must mention that Kathy Hoyt, who was the Nicaragua Network Co-Coordinator for many years, continues to collaborate on NicaNotes.

In August 2020 I had the idea of starting a webinar series and asked Barbara Larcom if she would be my partner in crime. We asked Chuck if AFGJ would support us and he didn’t hesitate. He even told Barbara he thought she would be an excellent moderator – and he was correct! Since then we’ve had 15 webinars attended by 80 to over 150 people. Barbara and I hope to continue with them in 2022.

We also began lobbying against RENACER in May 2021. Once again, despite the fact that Chuck doesn’t really believe in lobbying, he supported us and many at AFGJ helped with at least 7 major email blasts and more – organizational sign-on letters, individual sign-on letters and many meetings. It was an enormous amount of work.

But as Chuck said – it was a win – RENACER didn’t pass until right before the Nicaraguan elections. Even more, Senators, Representatives and their aides heard from thousands of pro-Sandinista US citizens – I know this was a surprise to them. Some were getting so many calls that their aides called AFGJ and asked us to stop!!!

And in 2021 Chuck supported us in developing anew the delegation work, facilitated by Coleen Littlejohn, which has also gone well. To me the most important way that Chuck supported this work was by encouraging many AFGJ staff to go on delegations to Nicaragua. Chuck was always thinking of preparing the younger generation.

I was so pleased that Vice President Rosario Murillo spoke about Chuck on Dec. 28 and his life was covered in much of the Nicaraguan media.

In case you don’t know, Chuck was part of the collective that wrote two books after the coup attempt: they are available for free on the front page of the AFGJ webpage in various formats. If you haven’t taken a look – I suggest flipping through and perhaps reading Chuck’s chapter in each book. When so many on the left were trashing Daniel Ortega, Chuck wrote an article about him and that is also in the first book.

Chuck was always reminding us of Nicaragua’s amazing example and challenging us to get that example out to the world. He often pointed out that it is well and good to denounce RENACER, RAIN, and the USAID, but it is probably even more essential to help others see that Nicaragua’s example is one to raise up, as others will follow it. The things being done in Nicaragua are exactly what the different solidarity movements in the US would like their own government to do.

In greetings to the Sandinistas on the 42nd anniversary of the Revolution Chuck wrote:

We are proud to be in solidarity with a people, a party, and a government which has recuperated the social and economic rights for all of its people and which stands in the top rank of nations for its achievement of the UN Millenium Goals, for gender equality, and for Climate Change leadership.

We salute the FSLN, as representative of the people’s aspirations, for standing firm against US imperialism since the Triumph. We apologize for the behavior of our political and economic leaders and we remember, and still are guided by, your exhortation in the 1980s that what we can best do for Nicaragua is to change our own country.

Please come on the delegations to Nicaragua when you can. Please write for NicaNotes. Please raise up the bright and profound example of Nicaragua. In this way we all honor Chuck.

Big hugs of solidarity to all of you,

This week, instead of news Briefs, we are repeating a NicaNotes essay by Chuck on Nicaragua solidarity from last June, written before Nicaragua’s Nov. 7th elections.

June 17, 2021
Which Way Forward for Solidarity?
By Chuck Kaufman

Conversations have been taking place recently about the Nicaraguan government’s decision to arrest certain people for money laundering and violations of the Foreign Agents law passed in October 2020 as well as the December 2020 law making treason a crime. The Foreign Agents law, like the Foreign Agent Registration Act in the US requires individuals and organizations to register if they receive foreign funding and submit reports on how that money is spent. One would think that committing treason by calling for a foreign government to overthrow your own democratically-elected government would by its nature be a crime. Only in December 2020 did Law 1055 make it such in Nicaragua.

There is no doubt that these arrests and shutting down of some NGOs makes our solidarity work harder. But that is not a criticism of the elected government of Nicaragua. More than forty years of history confirms that Nicaragua gains nothing by trying to please the United States. My opinion is that nothing we, as solidarity activists, could have done to explain the reality in Nicaragua and nothing that the government could have done would have appeased the United States to recognize the validity of the upcoming presidential election anyway.

The Revolutionary Government led by Daniel Ortega in the 1980s tried to jump over hurdles set by the US. The US’s only reaction was to set higher hurdles. As solidarity activists, we are playing a fool’s game if we think our true, eye-witness accounts about the real Nicaragua will convince US politicians to change our country’s ingrained policy of imperialism. Reasoned arguments do not influence congressional votes. Money does. Fear of losing their power does. We can’t compete on the money level, but we can make them fear to lose the next election. In fact, we did accomplish that in the solidarity movement of the 1980s, even convincing Congress to cut off aid to the Contras for a while.

So it is important to make those calls to Congress and to write those letters-to-the-editor. It is not that any particular call is going to change a vote or that any particular letter is going to change public opinion, but they are tools to build a movement that will be able to influence policy no matter which party of the 1% holds the reins of power.

Solidarity is working to change — to smash — US imperialism and Capitalism. That is why our work is never just about Nicaragua. It is about Nicaragua and Venezuela and Cuba, and Bolivia and on and on. Nicaraguan poet Roberto Vargas once told me, “Venezuela solidarity is Nicaragua solidarity because if Venezuela goes down, we all go down.” Alliance for Global Justice acts on that premise every day.

The Nicaraguans rose up in a bloody revolution that cast down the Somoza dictatorship and US domination almost 42 years ago. They have no obligation to play by the rules of Western Liberal Democracy which enslaved them in the first place. The electoral defeat of 1990 was partially the result of trying to meet the conditions demanded by the US while the US continued to kill and destroy and at the same time to throw an overwhelming amount of money and propaganda into the election. Too many lives were spent to win national liberation to give it away to the oligarchy-rigged nose counting scheme that we in the US call democracy even though the rules have been rigged in favor of Capital and white male property owners since we became a nation. Nicaragua has no obligation to cooperate in the unseating of its Revolution on a rigged roulette wheel.

RELATED CONTENT: Chuck Kaufman: A Great man has Left us

Our solidarity strategies should not treat Nicaragua as a victim and we should not apologize that Nicaragua protects its sovereignty with similar rules that the US has to keep foreign money out of its elections. Nor should we apologize when people are arrested for crimes that are crimes in most of the world, including the US. Just because they are doing it to accomplish US imperialist objectives, that doesn’t make money laundering or inciting and treason legal nor the people arrested political prisoners. None of them are the nominee of any opposition party and none of them score above single digits in public opinion surveys, counter to what the corporate press would have us believe.

Our solidarity needs to lift up Nicaragua as the heroic country that it is; a country and a government which feeds its children, keeps them healthy, and educates them to be doctors and teachers and sustainable farmers. We repeat the old saying that Nicaragua is the threat of a good example, but we often don’t act as if that is the living, powerful call to action that it still is today!

I challenge us to put just as much energy into helping to tell the world Nicaragua’s stories of success in the face of unrelenting sabotage by the world’s strongest bully as we do emoting about the latest sanctions bill or NYT or Guardian article. I’m not saying don’t do those things, but let’s give equal time to the incredible Gains of the Sandinista Revolution and what those gains mean for our own struggle for liberation in our own country or countries.

Featured image:  Chuck Kaufman speaks at a conference in Washington, DC, in 2011. 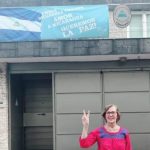