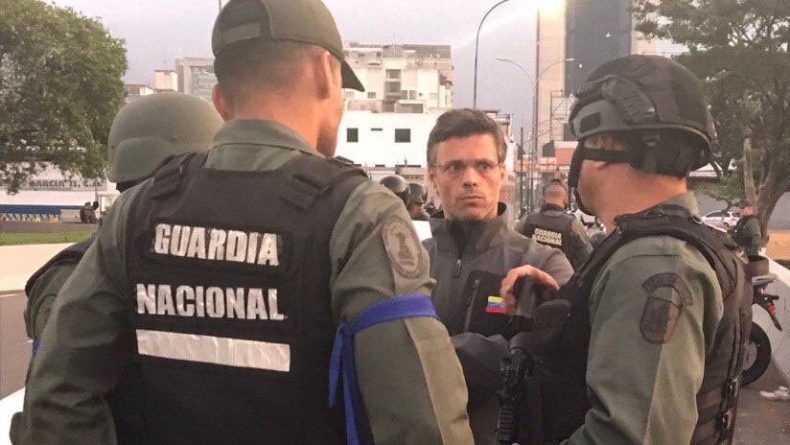 The self-proclaimed “interim president” of Venezuela, Juan Guaido, went live on Twitter this morning to call on the military and people to begin an uprising against the legitimate government of President Nicolas Maduro.

Main government offIcials have rejected the attempted coup and called on the country’s population to reject the coup and march towards the Miraflores presidential palace to protect the country from the far-right, U.S.-backed coup.

teleSUR’s correspondents spoke to the Chavistas gathering at the Miraflores palace in support of President Maduro and in rejection of the coup.

UPDATE: 11:15 am Jose Arnelas, the Chief of the Operational Strategic Command (CEOFAN), which is the highest command organ of the National Armed Forces, confirmed his support of the constitutional government and the Chavista revolutionary legacy. “As a soldier of this country who remains attached to my supreme commander Hugo Chavez’ legacy, I reaffirm my absolute loyalty to my Chief commander Nicolas Maduro. Today, more than ever, we, the National Bolivarian Armed Forces will defeat those who seek to break the Republic’s peace. We will overcome.”

As a Soldier of this Homeland, I REAFFIRM my #AbsoluteLoyalty to my General Commander @NicolasMaduro and also to the legacy of my Supreme Commander #HugoChavez . Today more than ever in the FANB we will OVERCOME against those who seek to break the Peace of the Republic. SUCCEED. https://t.co/6irjpnf1af

“We are a conscious, warrior and revolutionary people. Imperialism can understand it however it wants, but to the Palace of Miraflores, they will never return,” he said.

#HandsOffVenezuela | President of the National Constituent Assembly (ANC) of Venezuela @dcabellor: “We are a conscious, warrior and revolutionary people. Imperialism can understand it however it wants, but to the Palace of Miraflores they will never return. 10:30am Local time. pic.twitter.com/j3zUNjUVsO

UPDATE: 10:55 am Venezuelan Foreign Minister Jorge Arreaza responded to U.S. Vice President Mike Pence’s tweet by showing that he is assuming a “leadership role of the coup attempt. In the name of God, he calls for violence, destruction and death. Is that being a good Christian? The People of Venezuela and their Bolivarian Armed Forces are a guarantee of peace and respect for the Constitution.” UPDATE: 10:50 am The Bolivarian Alliance for the Americas (ALBA) countries strongly rejected attempts to violate the constitutional order in Venezuela and pointed out that the events are “clearly a coup attempt sponsored and prompted by the Venezuelan far-right radical forces acting in complicity with the historical enemies of Latin American countries’ independence and sovereignty.” The ALBA countries called on the Latin American peoples to defend their independence and sovereignty. UPDATE: 10:40 am Venezuela’s Vice President Delcy Rodriguez said U.S. Vice President Mike Pence’s claims supporting “Operation Freedom,” which is the code name used to disguising the U.S. backed military action in the Latin American country. “The puppet chosen by the empire and its ally governments only serve to ridiculously be the image on beauty covers but with its devilish face! The brave people of Bolívar and Chávez are with the constitutional Venezuelan President @NicolasMaduro we will overcome!” Vice President Rodriguez also pointed out “in a shameless and immoral way, the U.S. government recognizes its authorship in this criminal coup attempt against Venezuela! They’re showing the world their desire to destroy our Homeland! The Venezuelan people will continue defeating these imperial aggressions in peace! “​​​​​​​

The puppet chosen by the empire and its ally governments only serve to ridiculously be the image in beauty covers but with its devilish face! The brave people of Bolívar and Chávez are with the constitutional Venezuelan President @NicolasMaduro we will overcome! https://t.co/wY2VhXyg7u

Venezuela’s President Nicolas Maduro informed the people that the leaders of the National Bolivarian Armed Forces of Venezuela remain loyal to the revolutionary process.

“Nerves of steel! I have spoken with the Commanders of all the country’s regions and zones of comprehensive military defense. They have manifested their full loyalty to the people, the Constitution and the Homeland. I summon the people’s supreme mobilization to ensure the victory of peace. We will win!” he twitted.

Nerves of steel! I have talked with the Commanders of all the REDI and ZODI of the Country, who have manifested their total loyalty to the People, to the Constitution and to the Homeland. I call on a maximum popular mobilization to ensure a Peace victory. We shall overcome! https://t.co/aPY9duXOuT

UPDATE: 10:05 am Brazil’s President Jair Bolsonaro called a ministerial emergency meeting to analyze the Venezuelan situation, according to Vice President Hamilton Mourao. Regarding the coup attempt by opposition congressman Guaido, the Brazilian Foreign Minister Ernesto Araujo said he “expects the Venezuelan military to be part of the democratic transition process… we have to see the dimension of this. Brazil supports the democratic transition process.” UPDATE: 10: 00 am teleSUR’s correspondent in Venezuela delivers an update on what happens on Caracas streets. Venezuelan Mayor General denies takeover of La Carlota Air Base.

Peru’s Foreign Minister reported that President Martin Vizcarra administration supports the Guaido-led coup attempt in Venezuela and is calling an emergency meeting of The Lima Group.

“We fully support interim president Juan Guaido in his struggle to recover democracy in Venezuela. Maduro’s usurping, dictatorial regime must come to an end … Peru and the Lima Group are closely following the situation in Venezuela with a view to summon an emergency meeting.”

“We reiterate our full support for President Guaido and democracy in Venezuela. The Maduro dictatorship must end with the Venezuelan people’s peaceful force and within the constitutional frame. This will restore liberties, democracy, human rights and progress in Venezuela.”

“We welcome the adhesion of the military to the Constitution and the President in charge of Venezuela Juan Guaido. It is necessary to fully support the process of democratic transition in a peaceful way, “Almagro said.

The GENERAL HITMAN sponsors and promotes the attempted coup in Venezuela. The OAS has always opted for violence and coups, ignoring and violating the fundamental principles of International Law and the Charter of the #OAS https://t.co/FzV6ihcUjz

UPDATE 9:18 AM The United States government has come out in support of the coup in Venezuela.

The Mexican government has issued a statement saying it was worried about the escalation of Violence in Venezuela and a possibility of bloodshed. It also called for resuming peace dialogue efforts that were agreed on in Montevideo.

RELATED CONTENT: Read the US Department of State Document Mentioned by Chancellor Arreaza in UN

Country’s Defense Minister Vladimir Padrino rejected the coup attempt and said that the country’s legitimate military forces would respond to any attempt to overthrow the government of Nicolas Maduro. “We reject this coup movement that aims to fill the country with violence. The pseudo-political leaders who have placed themselves at the forefront of this subversive movement have used troops and police with weapons of war on a public road in the city to create anxiety and terror.”

Following Guaido’s plea, the Venezuelan Vice President of Communications, Jorge Rodriguez, tweeted that the military is confronting a group of traitors seeking to promote a coup d’Etat. “We inform the Venezuelan people that we are currently confronting and deactivating a small group of traitors in our military personnel who positioned themselves in the Altamira Distributor to promote a Coup d’Etat against the Constitution and the peace of the Republic.”

President of the National Constituent Assembly of Venezuela, Diosdado Cabello, denied the capture of the Carlota Air Base, after a small group of soldiers appeared to be supporting the Guaido coup.

“No military installation has been violated in the country, they are on the street in the Altamira Distributor and we are directing operations from the Carlota Air Base,” he explained. Likewise, the national government has called on the Venezuelan people to move to Miraflores to reject the coup attempt.