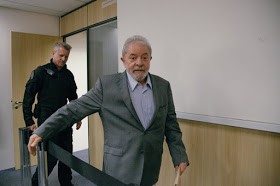 The regrettable and brief statement by Lula about Venezuela (in his first interview after being jailed) shows that the assertion that the “Venezuelan situation” is a product (in a decisive way) of a failed economic policy of Chavismo and not of a prolonged war strategy for transnational capital and its allies of the local bourgeoisie to seize oil revenues.

Lula says that “obviously I do not agree with the economic policy of Venezuela” as a starting point to offer his opinion, “obviously” assuming that the situation in Venezuela is a consequence of that policy and justifies the local opposition action and the “international community” to impose a “humanitarian solution”, necessary and inevitable.

And Guaido is only  something”ugly”, rough. It is a problem of aesthetics.

“I think it’s a mistake,” he says of the policy, although he does not specify if the error is some specific action of Maduro’s administration or of the entire Chavista period that generously benefited him (and his country) from imports and hiring big corporations of the Brazilian bourgeoisie. (like Odebrecht and the JBS meat company, just to name two). IT READS: Q. How do you see Venezuela? A. Obviously I do not agree with the Venezuelan Economic policy, I think it is a mistake. But I’m less in agreement with Brazil recognizing Guaido. Sincerely, what a lack of shame. They have taken Brazil to the lowest level in terms of foreign policy I’ve seen in my whole life. Even after that shame of the truck with food and they just sent 2 empty trucks. Each nation have to deal with their own issues. Let the Venezuelan people to choose democratically their leaders. If they want to go to the streets to oust the government so be it but do not let Trump do that.

What is certain and what is clear is that the offensive against the currency (the Bolivar), the smuggling of extraction, the sanctions from March 2015 until the blockade and the confiscations between August 2017 and April 2019, are not relevant nor do they matter to such a point that Lula does not mention it.

RELATED CONTENT: Lula da Silva: “I Will not Exchange my Dignity for my Freedom”

That is to say, all these expressions of the “economic war”, (including corruption through the frauds with contracts and imports protected by the fluid relations that existed between the two governments), have nothing to do with the deterioration of the life of every Venezuelan, at least openly since the end of 2014.

The denial of economic war
In defense of Lula (to continue with a tendency to feel guilty about everything) we should recognize that a significant part of economic “experts” of Chavismo openly and officially disqualified the hypothesis (more than demonstrated) of an economic war.
Next to the opposition “influencers” they mocked  those who talked or wrote about it.

In March 2015, with the application of sanctions and the Obama E.O. that declared Venezuela an unusual threat to US security, (along with the repeated “prophetic” warnings surrounding a “humanitarian crisis” that would affect the entire region) the imperial attack was officially launched.

But Chavista “economists” preferred to insist on the denial of the “economic war” as happened in December 2015 (in a semi-clandestine encounter in the Unearte), which took place after the Chavista defeat in the parliamentary elections. It should be noted that the result of those elections was influenced by the right-wing offensive around scarcity and inflation and the promise to end with the queues.

The paradox: where is the error?
Possibly from that scenario of debate (which validated the argument that held responsible the price controls, state intervention and expropriation on the outcome), the plan of alliances with private business groups emerged that, under the name of “engines of the economy”, was launched in March of 2016.

The contradictions soon erupted to the point that the designated “vice president of economy” resigned after 40 days in office.

This alliance with a vast sector of the bourgeoisie, the regularization of relations with others with which there were major public conflicts (such as the agro-industry headed by Polar) and the declared opening to the external sector with investments in mining, oil and infrastructure projects prevailed and it remains to this day in the midst of paradoxical statements about state interventionism.

In reality, privatizations have been deepening, through strategic alliances that have judicially confronted sectoral authorities with communal and peasant organizations (that is the case of Arroz del Alba-Agroinlaca).

It should be noted that these statements have a descriptive purpose and in no way question the agreement (necessary or inevitable) with business groups. (Personally, we are decidedly pragmatic).

But for the sake of that same pragmatism it is clear that there is no point in continuing to agree with private sectors that do not have a minimum of “commercial” commitment to the government or the discretion to reserve their preference for Guaidó. They are not asked to be “chavistas” but they should (at least) be discreet.

In any case, nobody is so naive to ignore that the war is for the control of the government and the scene of the battle is the State itself.

Phases of the economic war
In this sense and with a didactic purpose it is pertinent to make clear that the blockade and the confiscations of assets of the Republic are not but a superior phase of the economic war, in which we can identify these stages and actions and whose objective is the appropriation of the national wealth.

This set of deliberately offensive actions against the Venezuelan economy, clearly indicates that the “situation of Venezuela” is not an error of economic policy or the failure of a model (that in reality, being highly inclusive, has favored mainly the business sector), but consequence of the most prolonged and hard siege (in the sense of the medieval wars) against a whole people.