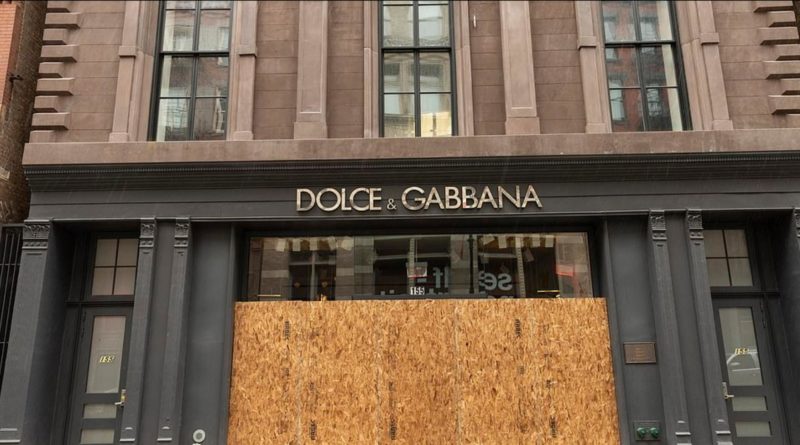 High-end stores throughout New York such as Louis Vuitton and Dolce & Gabbana are boarding up their windows in anticipation of civil unrest as the death toll in the city reached 1,867 on Friday with 305 new deaths.

The wealthy businesses had already been ordered closed along with bars and restaurants as part of the shelter in place protections but they are now taking further steps to secure their property and products as the city’s police department suffers high numbers of officers calling in sick with the coronavirus raging through its ranks.

Boarded up windows and empty streets have transformed the city that never sleeps into a war zone with city officials sending out on an emergency alert to New Yorkers’ cellphones on Friday calling on health workers to present themselves for battle against the coronavirus outbreak on the front lines in the city’s overstretched, overwhelmed and under resourced hospitals.

The alert came amid warnings that New York City will run out of crucial supplies by the end of next week and that Sunday will be ‘D-Day’ in terms of assessing what is needed for the weeks going forward. Dolce & Gabbana, Jimmy Choo and Louis Vuitton were among the Manhattan stores to cover up their windows with plywood in the past week as the crisis in the city worsened despite streets being empty of customers or even passersby.

The rows of boarded up buildings create a stark reminder of the newly unemployed workers who lost their jobs after the scale of the outbreak caused stores, bars and restaurants to shut their doors for the foreseeable future.

Some businesses attempted to light the mood on the closures, despite the rows of plywood covering their entrance, painting messages of support and encouragement that the coronavirus will be beaten.

Throughout Manhattan, the unsightly coverings are offset with the words of motivation.

‘We are all in this together,’ one reads. ‘Stay save. Save lives.’

Louis Vuitton in Soho was among the storefronts to leave its customers a messages on the wooden boards guarding its property reading: ‘The journey that was paused will eventually start again, Louis Vuitton wishes you & your loved ones health & safety.’ Auxiliary Police Lt. Pierre Moise, who joined the force in 1994 and worked in Brooklyn, also passed away.

Over the weekend, NYPD officers arrested three people in Brooklyn after they allegedly ‘failed to maintain social distancing.’

While violating social distancing is not a crime itself, the individuals arrested faced charges like unlawful assembly, disorderly conduct and obstructing governmental administration.

These arrests, and the person-to-person contact that comes with it, happened after Mayor Bill de Blasio threatened to fine residents who were ignoring emergency social distancing orders.

Similarly, Gov. Andrew Cuomo warned he would make social distancing ‘a law’ and called on the NYPD to ante up enforcement.

‘The NYPD has to get more aggressive. Period,’ Cuomo said.

Concerns from businesses that they need to board up their store are, as yet, unwarranted with reports of less crime in the city despite the marked difficulties of the NYPD to patrol the streets to the same extent with their own diminishing force.

According to data released by the NYPD for the last month, between March 16 and March 22, there was a 17 percent drop in major felonies while grand larceny was down 31 percent and misdemeanor assaults by 21 percent when compared to the same time last year.

Along with views of boarded up businesses, residents are now faced with the image of all New Yorkers covering their faces when they leave their homes as advised by Mayor Bill de Blasio in his Thursday press conference.

The city’s new advice came just before President Trump announced at his own Friday press briefing that the Centers for Disease Control was now recommending that Americans wear non-medical cloth masks – but pressed that it wasn’t a mandate.

For days, top experts, including members of Trump’s coronavirus taskforce said they were debating whether or not to put out a mask recommendation.

One concern is that Americans not working in the medical field would scoop up masks needed to protect doctors, nurses, first responders and others on the front lines.