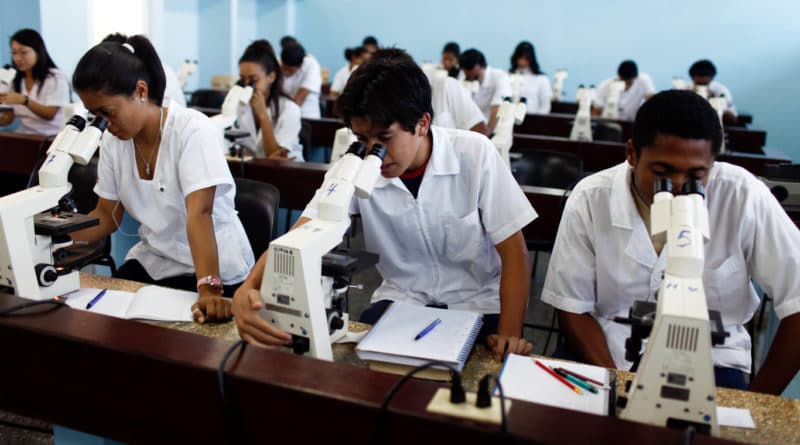 The Cuban government has been paying Americans through a little known program to study medicine in order to return to the United States and serve underprivileged communities.

It’s a medical school like no other: the largest of its kind in the world. The Latin American School of Medicine (ELAM) in Havana, Cuba hosts students from well over 100 countries and every year, dozens of American students are paid to go there to train as doctors. Paid, that is, by the Cuban government on the proviso that they return to the U.S. and serve underprivileged communities. Generally, students come from underprivileged backgrounds themselves and would not have been able to attend medical school in the U.S. for financial reasons. The average cost of in-state training at am American public college runs to nearly $35,000 per year, according to the Association of American Medical Colleges, with private universities charging well over $50,000. Women and people of color make up the clear majority of applicants.

Cuba is constantly demonized by both the U.S. government and the media. Washington made its opposition to the 1959 revolution immediately clear, attempting an ill-fated invasion at the Bay of Pigs in 1961. Decades of illegal blockades have since sapped the country’s strength and wealth. Nevertheless, it remains ideologically committed to opposing American imperialism and providing similarly poor countries with medical relief. While the U.S. sends troops to other countries, Cuba invariably sends medical professionals.

ELAM is the centerpiece of this policy. Amid a global COVID–19 pandemic, the island of 11 million has been punching above its weight, leading the fight back. A Cuban drug, Interferon Alpha 2b, has proven successful in boosting the immune systems of coronavirus patients. Fearing a public relations defeat, the United States government is actively trying to pressure countries to refuse aid from Cuba. Despite this, last week, 140 medical personnel left the country to travel to northern Italy, the current hotspot of the virus. “This is a global battle and we have to fight it together,” said Carlos Armando Garcia Hernandez, a nurse who volunteered for the mission. Doctors have also been sent to many neighboring islands, as well as Venezuela, Suriname and Nicaragua.

Watch: Cubans doctors arriving in Italy to help combat the coronavirus in Lombardy where scores have died. pic.twitter.com/MXQ14bWTU2

MintPress News spoke with two American attendees of ELAM to understand why they chose Cuba and how they found themselves on the tiny Caribbean island that has been shunned by American media and foreign policy. “It was like going to the UN,” said Sarpoma Sefa-Boakye, a Ghanaian-American who studied there between 2002 and 2009.

Dr. Sefa-Boakye now practices family medicine in San Diego. Walking to school every day, she said, she passed dorm rooms filled with Africans, Latin Americans and students from other Caribbean islands, all speaking different languages. “The teaching [here] is of the highest quality,” Olive Albanese assures me, with class sizes similar to those in American medical schools. Albanese is a fifth year student from Milwaukee, Wisconsin, currently studying at ELAM. “They actually recruit for students from the most humble communities around the world, people whose families would never be able to afford them a medical education, because we are the ones who will make the most humble and conscientious doctors,” she adds.

While Albanese applied to study because she wanted a university experience that would challenge her in more ways than just academically, Dr. Sefa-Boakye had no idea about the existence of such a possibility until she was spending time in Ghana and was shocked to meet Cuban doctors speaking her parents’ language of Twi. She was even more astonished when they told her that as an American, she could study for free in Cuba. Within weeks, she had enrolled.

Bernie Sanders was roundly condemned for praising the country’s health and medical prowess. “These are flat-out dictators, period, and they should be called for it, straight-up,” former vice-president Joe Biden told him at the most recent Democratic debate in Miami. Cuba preaches the idea of socialist medicine, which can be traced back to the revolutionary Che Guevara, himself a doctor. But the island, beset by poverty and by decades of U.S. sanctions, has had to develop unique methods for dealing with public health.

After the fall of the Soviet Union in 1991, Cuba was cut off from a major trading partner and a vital source of oil. In a similar fashion to its current actions against countries like Iran and Venezuela, the U.S. greatly increased sanctions on the island, imposing a unilateral (and illegal) embargo. With no oil and without the ability to pay for imported food or goods, the economy was devastated, and Cuba entered what it euphemistically calls “the special period.” Across the country there was widespread hunger, with caloric intake sharply decreasing and a generalized loss of weight among the population. The death rate among the elderly greatly increased.

Out of necessity, Cuba abandoned oil-thirsty, mechanized agriculture and embraced local, organic gardening, small-scale farming, permaculture, and a more vegan diet. As such, the changes, forced upon the population out of desperation ultimately led to positive changes in diet, industry, and lifestyle. Today, Cubans enjoy a longer life expectancy than Americans. The period is explored in the documentary “The Power of Community: How Cuba Survived Peak Oil.”

The health industry was also forced to change to a cheaper system of preventative medicine. Health professionals across the country were assigned local neighborhoods and instructed to visit and consult with every resident, nipping problems in the bud before they developed into costly diseases. Thus, teenage obesity was dealt with cheaply through advice on cooking, diet and exercise courses before it could metastasize into extremely expensive heart surgery.

Dr. Sefa-Boakye arrived at the tail end of the Special Period. “We spent six months on diabetes my first year in medical school because authorities were like ‘we CANNOT have a diabetes epidemic here,’ so whatever was needed in the community [to fight the extremely costly lifelong condition], that was a special focus in our training,” she said. To combat Dengue Fever, she noted, local community doctors and students like her made home visits to ensure no one was keeping large stores of water that could be a breeding ground for mosquitoes.

The benefit of this, Albanese says, is that medical authorities have incredibly detailed statistics about health problems in every neighborhood. Every neighborhood has its own local doctors and consultation offices, meaning everyone can see a physician for free, and one who lives within a short walk, too. “No one slips through the cracks,” she says.

This has developed into a much more integral system. “We had to learn about the biological, psychological social determinants of a human being. That meant that you not only had to treat the person by themselves, you had to treat them within [the context of] the community. And within the community was the ability to use medicine like acupuncture, plant-based foods, acupressure and more,” Sefa-Boakye adds.

A different kind of health care

There are certainly downsides to studying in Cuba, not least the intensive Spanish-language courses non-speakers must take. The internet is still infuriatingly slow and patchy on the island; the government continues to be highly mistrustful of it. Perhaps they have reason to be; the U.S. government was secretly behind multiple friendly-looking social networks aimed at Cubans, that were, in fact, attempts to foment regime change from within, sending users anti-communist propaganda and prompting them to attend anti-government demonstrations. The result is that “it requires a huge effort to maintain long-distance relationships with friends and family back home,” according to Albanese. Because of the embargo, there are also still shortages of testing kits and other equipment, meaning that practicing in Cuba does have its challenges.

Nevertheless, there is no need to constantly check and confirm if insurance companies will allow doctors to treat patients with certain drugs. Because there is no profit motive, doctors can also spend as long as they feel necessary consulting with patients. Indeed, Dr. Sefa-Boakye claimed she knew the names of all her patients and their families and was taught to treat them like they were loved ones. And of course, the system is free for both doctors and patients. “Imagine getting sick and not having to worry about insurance and hospital bills!” said Albanese.

In the U.S., one of the most common conversation topics between doctors is student loans. Sefa-Boakye says her colleagues look at her with amazement when she tells them she has no debt because Cuba paid for her studies.

The country not only brings in students from around the world but exports its own doctors to poor countries too. Tens of thousands of Cuban doctors work in dozens of countries, generating significant income for the cash-strapped island. While they are often described as little more than slaves in the U.S. press, the defection rates for those abroad appears to be minuscule. The effect they have had is not. Cuba, for instance, helped Venezuela’s Hugo Chavez build a nationalized healthcare system from the ground up. “You cannot talk about Latin America’s healthcare without talking about Cuba,” said Sefa-Boakye, estimating that there are incredibly more Cuban or Cuban-trained doctors in Africa currently than domestically-trained African doctors.

Cuba, like most countries, is in the midst of a growing COVID-19 problem. The government confirmed 139 cases on Sunday. The Guardian also reported that it faces a shortage of soap. Nevertheless, Albanese believes it is more equipped than most to deal with a pandemic: “I am very confident of Cuba’s public health and epidemiology system, it is all very organized: nationally, provincially, regionally and locally,” she said.

“I wish every U.S. citizen could experience the social qualities of Cuba. I have noticed that despite all the day to day difficulties of living in a blockaded country, that there is generally less anxiety and depression here, that people are, in general, social, outgoing, friendly, easygoing, laugh often and find time to relax and enjoy life. There is not so much social isolation and fear of strangers here as there is in the U.S.”

Americans can apply for ELAM through the Interreligious Foundation for Community Organization.

Featured image: Medicine students look through microscopes at a laboratory of the Latin American School of Medicine in Havana. Javier Galeano | AP