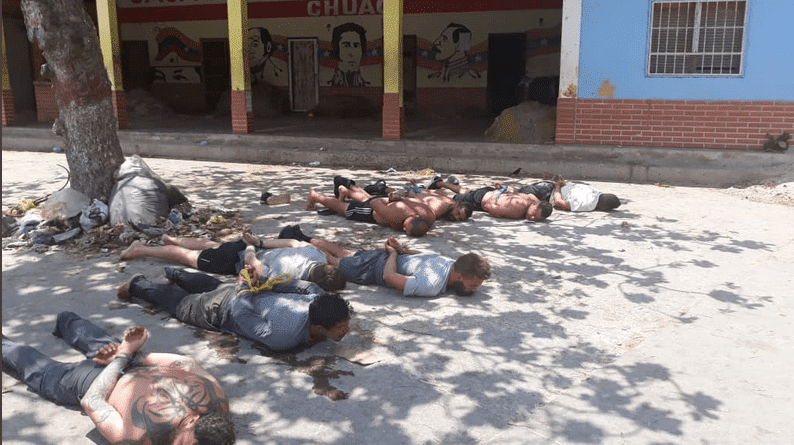 The civic-military unity of Chavismo was evident in images showing local fisherman in Chuao taking active participation in the intelligence operation. In the first image of the captured mercenaries, it can be read in the background that they were in front of the “Socialist Fishermen House” in Chuao.

In the background can be read:
Socialis Fisherman House
Bolivarian doctrine: "All People's War"
No Pasaran! https://t.co/bZouZTLAM6

Venezuelan officials have not yet made a public recounting of the events and it might be because of the ongoing nature of the search and capture operations. Cliver Alcala, the Venezuelan mercenary leader of this operation was captured in Colombia a few weeks ago. He was immediately deported to the United States where he is currently being protected. He made public statements before leaving Colombia, mentioning a total of 300 mercenaries being trained in that country, more precisely in La Guajira, the north eastern coastal area bordering Venezuela.

More images of 8 mercenaries captured today in Chuao in connection with the Macuto failed terrorist incursion…fishermen in the area along with state police and FANB worked together to defend our sovereignty. https://t.co/kKXAOyFSIM

From social media sources, this is the information available at the moment about the ten mercenaries. Two of them were captured later in an unpopulated area between Puerto Cruz and Puerto Maya, also in Aragua state.

In the video below, the moment when Antonio Sequea and Josnars Baduel were transferred to a law enforcement facility in La Guaira can be seen.

#FuriaBolivariana in action, in a developing Civic-Military-Police operation, 8 mercenaries were captured, among whom is the head of the terrorist operation Antonio Sequea, already under custody of authorities. We will win!! https :// pic.twitter.com/GzMqZEWnLu

URGENT | Gusano military accounts that have claimed the #OperacionGedeon confirm the alleged arrest of two Americans. The photo: They argue, was reportedly taken today. it was sent via satellite. https :// pic.twitter.com/23GoPv2SNC https://t.co/HaDyCF2Sub

This is what an American mercenary looks like BEFORE/AFTER facing the Revolutionary government of #Venezuela. pic.twitter.com/EPSDmOZgYb

In the video below, Josnars Baduel was providing information to authorities in a very expedited fashion and saying that the two US mercenaries worked for Donald Trump’s head of security, Keith Schiller.

One of the people captured in the mercenary invasion of Venezuela says the two Americans with him (also captured) work for "the head of security of the U.S. president." Last week's AP story tried to distance Keith Schiller ("Trump's longtime bodyguard") from the mercenaries. https://t.co/TaEc4Myl38

Guaido, US and Colombia connection

In the early hours Monday, social networks in Venezuela reverberated with images, videos and audios made public by a hard core anti-Chavista journalist based in Miami, Patricia Poleo, presenting irrefutable evidence of the connection between Juan Guaido and the mercenaries. The journalist presented a scan of a contract signed by them in Colombia financing the adventurist mission.

The witness to the contract between Goudreau and Guaido happens to be the former attorney for Tony Hernandez, the brother of US-backed Honduran Pres. Juan Orlando Hernandez who was convicted by a US federal judge of large-scale narco-trafficking. https://t.co/2kmeCx3P6q

As expected Juan Guaido went online and denied any wrong doing and again, AP’s Joshua Goodman took charge of making his denial public, using his twitter account. Several analysts have highlighted the systematic role of this Miami based “journalist” in setting the table for regime change operations in Venezuela.

Look at the AP “free press fighter” aka @APjoshgoodman doing what he has been trying to do for the last week: washing guaido’s and US hands off the “escualidos” Macuto bay of pigs. This press mercenary has his hands dirty in this plot… @AP https://t.co/wBK4acgX8u

This an ongoing story and Venezuelan authorities have not provided more information due to the national security nature of this incident. Orinoco Tribune will provide additional information when it is available.