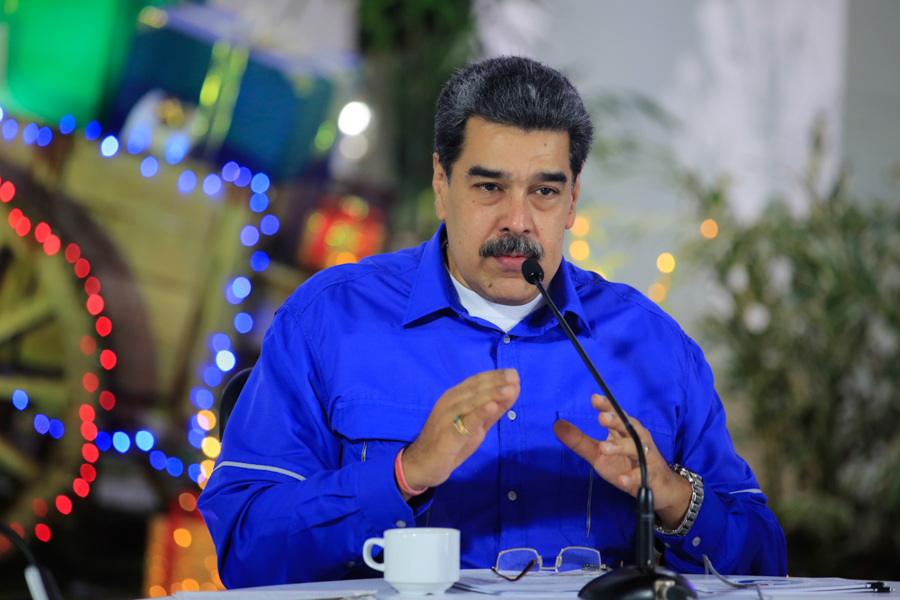 Despite the blockade and unilateral sanctions, Venezuela has sustained economic growth.

This Wednesday, Nicolás Maduro affirmed this that Venezuela, despite the blockade and unilateral sanctions, has sustained economic growth.

Speaking from the Casona Cultura Aquiles Nazoa, the head of state described 2022 as a “takeoff” year, the beginning of a new era of growth, accompanying the 18 Productive Engines of the Bolivarian Economic Agenda.

He emphasized that 2022 is the first year of expansion and accelerated growth, of wealth creation and the construction of the new economy. “The post-oil economy has been born and nothing and no one is going to stop it,” Maduro said.

Likewise, Maduro said that the Bolivarian Economic Agenda, with its 18 Productive Engines, constitutes a tool of resistance against the imperial blockade.

For this reason, he called on all sectors of the country to “work and unite [in] permanent production.”

Maduro reiterated the call for a permanent meeting between Venezuelans: “this is only possible if we all row in the same direction, with the same intensity, with the same force—row this great ship, called Venezuela, that we are carrying forward.”

He stated that the 3R.NETS 2030 Economic Growth Plan should ensure the country’s productive forces work together to achieve a harmonious and sustained growth for the years to come.

The president directed progress in production, in investments, in the fields, to resolve all issues within the Great Agro-Venezuela Mission with its nine vertices.

“With the nine vertices,” Maduro said, “we have taken care of every detail of financing, land, machinery, marketing, fair prices for seeds, and scientific-technical support.”

In this regard, Wilmar Castro Soteldo, minister for agricultural production and land, issued a report on the Global Productive Plan in the agri-food sector in Venezuela, highlighting that the advance of national production is 11.145 million tons of food, including 7.8 million from the vegetable sector and 3.342 million tons from the animal sector.

Castro Soteldo highlighted that during the rainy sowing cycle, in which cereals, such as rice, corn and sorghum, are important, it was possible to sow 514,299 hectares, with a yield of 4 to 4.5 tons per hectare, and with a projection of 2.314 million tons of corn, which had not been achieved since 2012, and represents a 17% growth.

Coffee reached 223,000 hectares in Venezuela, between new crops and plantings. The figures increased from 15 quintals in the last five years to more than 25 quintals, Soteldo said.

Regarding exports, the Soteldo said that Venezuela has to consolidate the goal of being a country that has the capacity to be self-sufficient and to export.

He pointed out that the export vocation should focus on placing Venezuelan rice in markets such as Iran, Qatar, Saudi Arabia, Egypt, Russia, China, and others.

Likewise, he pointed out that work must be done to add “a few thousand more hectares of rice to guarantee the rice of the Venezuelan household, and also in the short and medium term, 2023, 2024, to build the export industry.”

Similarly, the president suggested strengthening the potential of the Food Mission, the Sovereign Field Fair, the Protein Plan, the CLAP, and the School Food Plan (PAE).

Furthermore, Carlos Leal Tellería, minister of food, pointed out that, thanks to the efforts of the National Government, there are mechanisms that guarantee the Venezuelan people’s access to food at affordable prices.

On the other hand, President Maduro said that the producers who have been affected by the heavy rains in the country will have the support of the administration during their recovery.

“Right now, with the rains, there have been effects in different parts of the country, and all producers have the support of the Bolivarian government of which I preside,” Maduro said.

In terms of fishing, the Minister for Fisheries and Aquaculture Juan Carlos Loyo reported that the fishing catch is close to 144,000 tons. “Thanks to the effort made by the Venezuelan government, a good part of that catch is located in small fisheries and industrial fishing,” noted Loyo.

Loyo added that the aquaculture sector, through the production of shrimp, was placed as the second export point in the Bolivarian nation: “the second item, in terms of figures, that is currently reaching 18 countries throughout the world, is the aquaculture sector. It has a production of about 25,870 tons, 90 % of which comes from the shrimp sector.”

The minister estimated that the season is expected to close with around 170,000 to 180,000 thousand tons of shrimp caught, thus growing the sector.