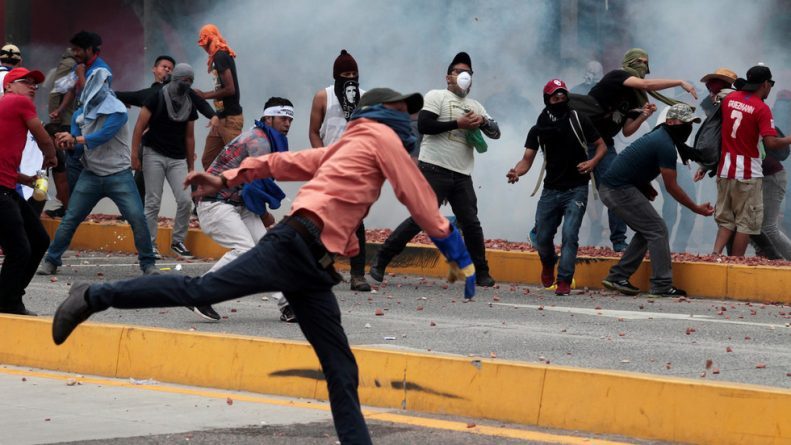 Riots against President Juan Orlando Hernandez have been raging in Honduras for several days. But the media press coverage has been very different from protests against Venezuela’s Nicolas Maduro. And it’s not hard to see why.
Unlike Venezuela, Honduras is a close US ally.

There have been multiple reports of violent clashes between demonstrators and state security forces since the riots broke out last week over Hernandez’s privatization proposal. Hernandez eventually dropped the plan, but the riots have since morphed into a more generalized protest against his government’s corruption and unpopular policies.

On Monday protesters set fire to containers belonging to the Dole Fruit Company in a rural area near the small village of Guadalupe Carney. Days earlier on May 31, protesters attacked the US Embassy in the Honduran capital, Tegucigalpa. About 12 tires were set alight near the mission’s entrance after having been doused in gasoline.

Hernandez’s deeply unpopular proposals to privatize the country’s healthcare, pension, and education systems add to a litany of public grievances against his government, which was elected in 2017 via an election that was widely deemed fraudulent, including by the pro-Washington Organization of American States. In addition to growing unpopularity, according to major human rights organizations such as Amnesty International Hernandez’s government is one of worst human rights violators in the hemisphere. And there is growing evidence that the country has degenerated into a narco-state.

Both the US Embassy and the Dole Fruit Company are poignant examples of US power across Latin America. For decades large agricultural companies such as Dole and Chiquita have decimated the livelihoods of small farmers throughout the region – after all, how could they compete with such multinational giants that receive substantial subsidies from the US government (in an ironic violation of the principles of “free enterprise” and a “level playing field”).

This process was accelerated by the Central Free Trade Agreement (CAFTA). Lesser known than its counterpart agreement NAFTA, the deal severely damaged the domestic agricultural industry of Honduras and other Central American countries – and contributed to the outward migration of people from the region. Such agro-industrial giants have also played a role in US regime change efforts. In 1954, Washington overthrew the government of President Jacobo Arbenz in Guatemala in part due to his nationalization of the United Fruit Company.

In 2009, the democratically-elected government of Manuel Zelaya was toppled by the military with US backing. Honduran elites became disaffected with his resistance to neoliberalism and left pivot towards public investment and progressive social policies. It later emerged that Hillary Clinton as Secretary of State played a hand in the 2009 coup against the democratically-elected government of Manual Zelaya and worked to prop up the post-coup governments. Under her leadership, the State Department assisted successive post-coup governments with propaganda campaigns to “scrub” their image. Washington has also been providing Honduran state security forces with generous funding in spite of Amnesty and other human rights groups’ accusations of involvement in human rights abuses.

But when it comes to covering the protests, there are no 24/7 discussions and bashing of the government as it was in the case of Venezuela in the American mainstream media.

A CNN report, for instance, quoted the State Department’s response that the fire at the embassy was an “unacceptable” act of “violence,” and that the US diplomats were working “closely” with Honduran authorities. It mentioned nothing of 2009 coup, US interference in the country and wider region, or any background to Hernandez’s unpopularity except that he is under investigation for narco-trafficking charges – though repeated his denial and claim that there is no evidence. A CBSN report, meanwhile, simply repeats Hernandez’s claim that no one will be laid off and the US Ambassador to Honduras’ urging of protesters refrain from resorting to acts of violence.

Tellingly, the protests themselves didn’t get much coverage in the mainstream press until the attack on the US Embassy. The protests actually started on the week that began April 29. But aside from World Politics Review and few other niche publications, practically no one picked up on the story until the embassy incident last week.