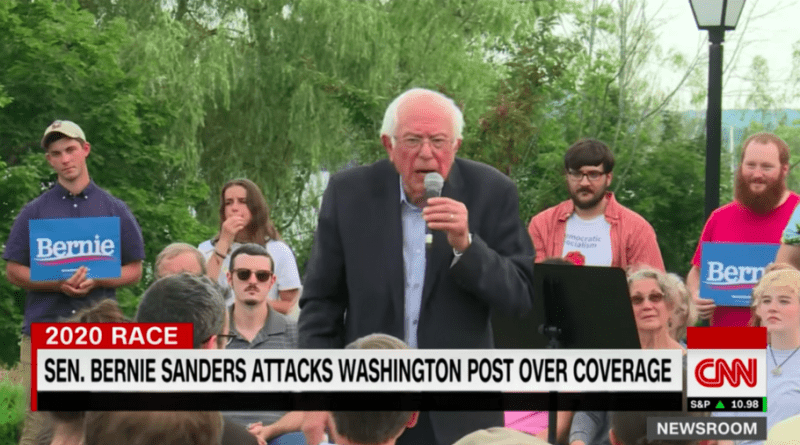 After days of ridiculous, hysterical garment rending by mass media talking heads in response to Senator Bernie Sanders’ utterly undeniable assertion that The Washington Post has displayed unfair bias against his campaign, people with extensive experience in the mainstream press who are fed up with the lies are beginning to push back. Hard.

Former MSNBC producer Jeff Cohen has published an article in Salon titled “Memo to mainstream journalists: Can the phony outrage; Bernie is right about bias”. Cohen details his experience with the way corporate media outlets keep a uniform pro-establishment narrative running throughout all their coverage without their staff having to be directly told to to do this by their supervisors (though sometimes that happens, too). He writes as follows:

“It happens because of groupthink. It happens because top editors and producers know — without being told — which issues and sources are off limits. No orders need be given, for example, for rank-and-file journalists to understand that the business of the corporate boss or top advertisers is off-limits, short of criminal indictments.

“No memo is needed to achieve the narrowness of perspective — selecting all the usual experts from all the usual think tanks to say all the usual things. Think Tom Friedman. Or Barry McCaffrey. Or Neera Tanden. Or any of the elite club members who’ve been proven to be absurdly wrong time and again about national or global affairs.”

Cohen’s exposé follows the phenomenal segment recently aired on The Hill’s show Rising, in which former MSNBC star Krystal Ball and her co-host Saagar Enjati both detailed their experience with the way access journalism, financial incentives, prestige incentives and peer pressure were used to push them each toward protecting establishment narratives in their respective mainstream media careers. Ball said at one point she was literally called into the office and forbidden from doing any critical Hillary Clinton coverage without prior approval in the lead-up to the 2016 election, saying that in mainstream journalism jobs “you are aware of what you’re going to be rewarded for and what you’re going to be punished for, or not rewarded for.”

“It’s not necessarily that somebody tells you how to do your coverage, it’s that if you were to do your coverage that way, you would not be hired at that institution,” Enjati said. “So it’s like if you do not already fit within this framework, then the system is designed to not give you a voice. And if you necessarily did do that, all of the incentive structures around your pay, around your promotion, around your colleagues that are slapping you on the back, that would all disappear. So it’s a system of reinforcement, which makes it so that you wouldn’t go down that path in the first place.”

Rolling Stone’s Matt Taibbi has also jumped in to push back against the absurd denials of bias from the establishment media, publishing a new article titled “The Campaign Press: Members of the 10 Percent, Reporting for the One Percent — Media companies run by the country’s richest people can’t help but project the mindset of their owners.” Taibbi, an award-winning journalist with lots of experience in the news media industry, writes that pro-establishment narratives are advanced in mainstream press not because some explicit order is handed down by a media-owning oligarch, but because “We all know what takes will and will not earn attaboys in newsrooms.”

Why the Sanders media beef is legit: https://t.co/xeBKF15XSB

RELATED CONTENT: Mega Group, Maxwells and Mossad: The Spy Story at the Heart of the Jeffrey Epstein Scandal

“The news media is now loathed in the same way banks, tobacco companies, and health insurance companies are, and it refuses to understand this. Mistakes like WMDs are a problem, but the media’s biggest issue is exactly its bubble-ness, and clubby inability to respond to criticism in any way except to denounce it as misinformation and error. Equating all criticism of media with Trumpism is pouring gasoline on the fire.

“The public is not stupid. It sees that companies like CNN and NBC are billion-dollar properties, pushing shows anchored by big-city millionaires. A Vanderbilt like Anderson Cooper or a half-wit legacy pledge like Chris Cuomo shoveling coal for Comcast, Amazon, AT&T, or Rupert Murdoch is the standard setup.”

Taibbi is correct. Trust in the mass media continues to plummet, and these stupid, nonsensical hissy fits they throw whenever criticized are only making it worse.

What cracks me up most about all this is that the faux outrage over Sanders’ criticisms of The Washington Post was completely unnecessary for everyone involved. They could have just ignored it and let the news churn bury it, but they’re so insulated in their little echo chambers that they seriously believed they could get the public rallying to their defense on this. The general consensus was something like “Ah ha! Bernie did that media-criticizing thing that we all agreed nobody’s allowed to do anymore! We’ve got him this time, boys!”

And all they accomplished in doing this was giving honest journalists an opportunity to inform the public about the insider tricks of their trade. You may be absolutely certain that the information that has been given to the public by Cohen, Ball, Enjati and Taibbi will remain in high circulation throughout the Sanders campaign in response to the increasingly shrill torrent of establishment smears, breaking the spell of mainstream media trust for all who view it.

All these damning insider criticisms of the mainstream American press are coming out at the same time a new Rasmussen poll finds that less than one third of the US population believes the story they’re being told by the corporate media about the highly suspicious death of accused sex trafficker Jeffrey Epstein. Despite the mass media’s mad push to tar anyone questioning the official narrative about Epstein as a loony “conspiracy theorist”, only 29 percent of those surveyed reported that they believed Epstein had committed suicide as they’ve been told, while 42 percent believe he was murdered. Never in my life have I seen such a widespread and instantaneous rejection of an establishment-promulgated narrative in the United States.

This is hugely significant. The entire imperial oppression machine is held together with aggressive plutocratic propaganda; the ability of the ruling class to manipulate the way people think, act and vote is the only thing stopping the public from using the power of their numbers to force real changes and create a new system that is not built upon endless war, ecocide and exploitation. The mass media propaganda engine is now at its weakest and most vulnerable point ever, and the narrative managers’ attempts to regain control are only exposing them more severely.

People are waking up.