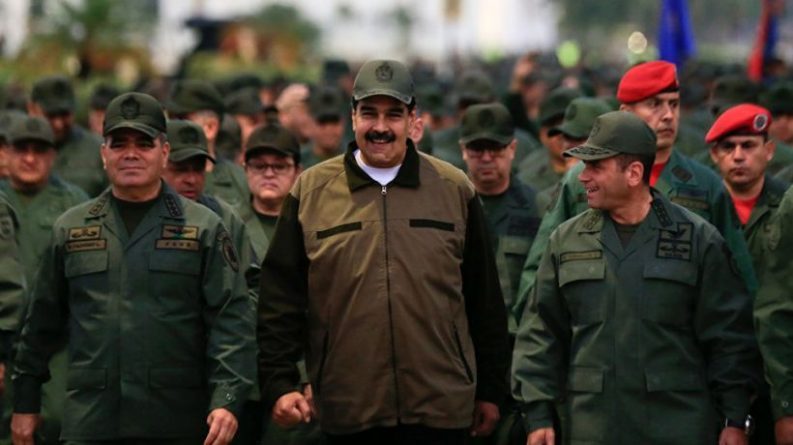 In January, the notebook of John Bolton, director of the National Security Council, became famous by a note in his notebook that said clearly: “five thousand troops to Colombia.”

The message quickly became viral and all social networks exploded debating about the veracity of the image. Later, throughout January and February, Bolton, along with the Venezuela team of the White House, as they called themselves, took charge of repeating the idea that if Nicolás Maduro did not lead to a “peaceful transition, he would take the path of military option. ”

“Bolton’s gesture suggested several goals: to intimidate the FANB and adjust the social climate with the expectations of a military intervention for or against, this last one represents the same for the foreign establishment because the psychic chaotization of the collective is considered. At a time when “Team Guaidó” tries to capture military defections, with the aim of mercenarizing their interests to support the desired coup d’état led by Voluntad Popular (VP), ” wrote Ernesto Cazal, columnist of this house, in a note entitled “Bolton’s book and other psychological operations” dated February 5 this year.

In this logic, the psychological campaign that followed the book was extremely aggressive in seeking precisely to terrorize both the military political high command of the Bolivarian revolution, and the millions of Chavistas who support the current Venezuelan government organized in different forms of resistance to the threats of intervention against him.

THE DAY AFTER THE FAILED COUP: THE STORY OF THE WHITE HOUSE
Once the April 30 coup was dismantled, John Bolton, as well as Secretary of State Mike Pompeo and Venezuela’s envoy Elliott Abrams, launched the version that the attempt failed because the president of the Supreme Court of Justice, Maikel Moreno, the Minister of Defense, Vladimir Padrino López, and the head of Casa Militar, Rafael González Dala, did not keep their word. “Cell phones did not respond, but there was already a signed document about the transfer of power to Juan Guaidó,” Abrams said.

According to White House sources, consulted by The Washington Post , Juan Guaidó “presented a fairly complete plan in which top military commanders would switch sides, while others would be allowed to leave the country.” On Monday the plan began to fall apart. Maduro found out earlier and Guaidó responded by running,” says The Washington Post , which maintains that the negotiations were carried out by the self-proclaimed with the supervision of the White House.

Bolton, on the other hand, was in charge of informing President Donald Trump minute by minute since the pronouncement of Guaidó. Until finally mid-morning they saw Vladimir Padrino López giving a pronouncement in favor of President Maduro. At that time, according to the US newspaper: “Trump’s administration, seeking to undermine Maduro’s trust in those around him, decided to get rid of Padrino, Maikel Moreno and Hernández Dala saying they had agreed to sign a document in favor of recognizing Guaidó as Acting President”.

The US media, which is a sounding board for the different executive agencies of the United States, said that before making this decision there was “a lack of consensus on the direction to take in the White House when senior officials were disappointed with the events in the ground”.

The report also points out the differences between Trump and John Bolton, which has a wide scope in decisions about Venezuela. “The president has occasionally told others that Bolton wants to get him into a war,” says The Washington Post .

So much so that at a private meeting in the White House, Paul Selva, head of the Air Force and second in command of the Joint Chiefs of Staff, was angry at the recriminations of Bolton and Maurice Claver-Carone, in charge of Latin America in the Security Council, for not presenting any military option on Venezuela. “Selva, irritated by the interruptions and the style of confrontation of the two officials, hit his hand against the table with a loud snap,” remarked the report on the Pentagon’s refusal to launch a military operation that can get out of control.

PSYCHOLOGICAL OPERATION AGAINST THE MILITARY HIGH COMMAND OF CHAVISMO
Beyond the divided White House, the decision to establish the version that the defense minister, Padrino López, the president of the TSJ, Maikel Moreno, and the head of Casa Militar, Hernández Dala, were about to mount a coup aims to undermine Maduro’s confidence in his inner circle. The seal of the operation comes exactly from the hand of John Bolton, who on April 30 was the first official to affirm “Padrino López is against Maduro”.

According to this strategy, this Thursday, the representative of Guaidó in the United States, Carlos Vecchio, published a tweet where he mentioned seven seconds of a video where Maduro’s gaze towards Padrino López supposedly proved the version that the latter had negotiated with the White House. Quickly, the video went viral in other accounts of antichavismo.

A few minutes later Senator Marco Rubio, one of the most active conspirators against Venezuela, tweeted : “Maduro who is surrounded by conspirators ready to break at any moment.” In this way, the psychological operation, like that of Bolton’s notebook, aims to generate distrust in the military high command so that hasty and erroneous decisions are made, trying to extend the effect of surprise, and of apparent confusion after the coup . “If I were Maduro, I would ask if there is still someone in the military high command who is loyal,” said Elliott Abrams, who is in charge of the State Department in Venezuela, at a meeting of the OAS Permanent Council.

Of course, the same line of argument, echoing this, was repeated in accounts of the most recalcitrant antichavismo as a way of being repeaters that echoed this version.

However, this version contradicts much of what The Wall Street Journal maintains, which has constantly criticized Guaidó for presenting plans that are not followed in practice. “The opposition says he was negotiating the expulsion of Maduro with officials of the regime. But General Vladimir Padrino López faked his role of conspirator and gave the information to Maduro and Russians. That’s why the coup never happened,” he summed up the paper quoted a source consulted about the failed coup.