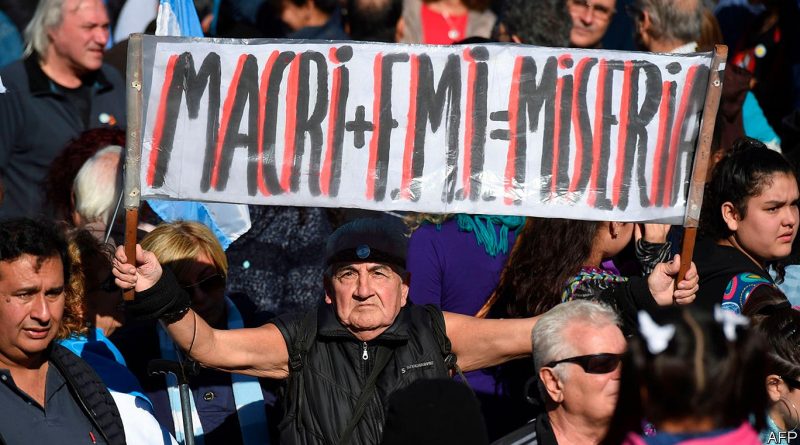 Argentina’s Mauricio Macri had promised to end the currency restriction, known as “dollar clamp”, imposed by former President Cristina Fernandez de Kirchner (CFK) and he stuck to it and suppressed it as soon as he took office. But now, though limited, he is ending up his term in office by reinstating it. Not to protect international reserves and people’s economy however, as it was the case of Cristina Fernandez. On the contrary the Macri Administration has pushed the country to its limit. Default or suspension of payments that were cursed words for him are now euphemistically translated by technocrats into debt “re-profiling,” as the accumulated devaluation of the local currency at the end of August stands at 304 percent. Under the Kirchner Administration, Argentina paid all of its debts and inflation was under control.

Now, it has become one of the planet’s most indebted countries, with the highest interest rates, the second largest inflation, the country with the highest risk rating, and one of the steepest GDP contractions. This all means a huge loss in revenues for the majority, poverty or even destitution for millions, hunger for children and the elderly. Amazingly, large amounts of people who are actually working eat badly once or twice a day. At the same time, an unlimited financial speculation, fiscal privileges, and the use of currency on behalf of concentrated capital have fostered an obscene enrichment of a small local and international elite, including Macri and members of his Cabinet. It would not be surprising that Macri’s dollar clamp, different to Kirchenr’s, is aimed at creating another tool to continue facilitating the flight of capital as it was revealed this week by Argentinian journalist Horacio Verbitsky.

Compulsive neoliberals, Macri and his financial capitalist partners are insatiable and they may already be taking over Argentina’s shrinking international reserves as there is some of it left. Together with the dream of reelection, this may possibly be the main cause of his anguish in the face of the risk that the International Monetary Fund would not transfer the remaining five billion dollars that makes up the last part of the highest funding passed by the institution in its history. The Argentinean President is sticking to the hope of new aid on behalf of his friend Donald Trump. The truth is that without his support, Macri would not have received such a loan for an economy destroyed in less than four years by the neoliberal orthodoxy. His packages of measures to face the shortages caused by the new devaluation are concealed, devised for an electoral atmosphere, but they will not save him from being defeated by his opponents. Cristina Fernandez made a transparent description of Macri when she simply said he was a bad person.

Criminally, the $57 billion IMF loan that Argentina received is being spent on paying the debt and interests while trying to contain the drop of the local currency through the Central Bank’s by selling off $300 million per day. This week, as citizens run to buy foreign currency, the State injected almost one billion in one day. This is all to say that with that colossal amount there was not one school built not a hospital, or was there food bought for school and community soup kitchens that are short of supplies or medicines for those who need them, as is the urgent case of the pensioners. So serious is the lack of medicine that opposition presidential candidate Alberto Fernandez has already promised that one of his first measures if elected will be to provide free medicines for that vulnerable group. According to him, it would be possible to fund the project just by not paying certain government bond interests for a few days. But such a measure would never be in the mind of a neoliberal elitist who thinks it is more important to save a bank than to give food to a child.

In the face of this Argentinean mega crisis and the devastating social, economic and cultural scenario that is being repeated everywhere on a daily basis and implementation of more destructive neoliberal policies means that the people, social fighters, militants and people’s organizations have the duty of uniting and fighting back against them back. Neoliberalism is not just an economic model but a strategy to control people in matters of materials, identity, values, culture and education, through violence. If not, than what are Washington’s military interventions that they call wars on terror and drugs all about? This is why it is necessary to study its causes and effects, its evolution, its old and new faces, so as to fight it successfully.

Neoliberalism cannot be completely eliminated in one single country because it is an economic policy imposed by the Washington Consensus worldwide. But as we are seeing in Venezuela, Argentina, Brazil, Bolivia, Uruguay, etc., it is possible to make it move backwards, to a lesser or greater degree, through a clear political will to fight it through all resources of the State. In the Mexico of Andres Manuel Lopez Obrador for example, despite the straitjacket of some neo liberal agreements, it is demonstrating a sovereign energy policy, a strong performance of the State in a social orientation of the economy, and a nonintervention position in Venezuela’s affairs.