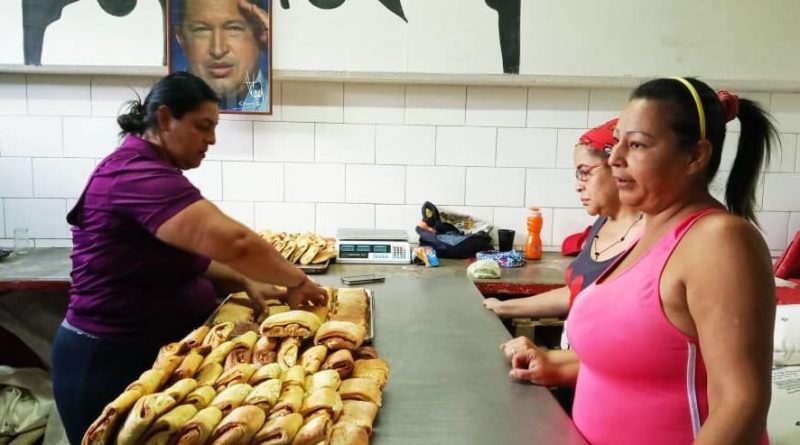 The Victoria Socialista or Socialist Victory Commune in Caracas is struggling in its territory against the severe economic situation. It has become a stronghold, a space to solve the needs of the community. It is hard but possible.

Caracas is an overlap of cities; times; of something it never was, could have been, managed to be; dismantling itself; anticipating what is to come. There is a city for the poorer middle classes; for the more powerful middle classes, isolated behind walls, wires and alarms; a city of Chavez; slums that are myth and power.

Where does Caracas begin and where does it end? In the last hovel that leads to the mountain, in the last mansion over the woods that looks like forest.

This era is lived differently in those overlapping cities. While there are high walls with security measures on the one hand, there is a Caracas that will not give up, fighting collectively to face these hard times. Deiker Alvarez, a 20 year old Commune member states it clearly: “There is a crisis for real.” And he goes on explaining the reasons for that situation: “It has been provoked to destroy what we are building.” Alvarez talks based on two certainties which are one in fact: Hugo Chavez and the Socialist Victory Commune, placed in the town of Carapita, in southwestern Caracas.

The Socialist Victory Commune can be seen from the main avenue. A space with a communal bank; a chapter of the national symphony orchestra; a cultural association; a health center; a space for informatics learning; a sport center; soup kitchen; the Strong and United bakery; a social property transport company which is also in charge of a communal truck.

The seat is owned by the commune. “All this structure is sustained through self-management, not due to any public institution. It’s thanks to our social property companies,” Deiker Alvarez tells Sputnik as spokesperson of the economics and political organization.

The communal headquarter is a space with a lot of movement, people coming in, going out, asking questions, buying, talking, getting informed. “The commune has become a space of encounter where we go to share and assume the commune as part of our life. That is the commune too. More than an operation, it’s spirit. The communal spirit, as it was explained by then President Hugo Chavez during one of his last public speeches, which were rather an exercise of televised political training. In his speech known as “Golpe de Timon” (or The Strike at the Helm), a few days after his presidential election on October 2012, Chavez insisted on the need not only of building communes as territorialized tools to move towards socialism but as a way to develop community, collectivity, spirit. How is that dimension measured?

The architecture of transition was devised on two foundations, on the one hand democratizing the existing State and on the other, building the bases for a new form of the State which should be based on the communes, with self-government systems in each of them. That was the target and the calling in a different economic and political moment of the country.

“Self-government is not easy. We have advanced experience and it is built step by step, very consciously and with ideological training. The first feature of a self-governed space is solidarity because one has to understand that we govern for everyone in our territory. Commune is a way of government in our territory,” Deiker Alvarez explains.

Self-government includes concrete agencies, such as the parliament, an executive body, and a comptroller. It entails. and it is above all, a constant exercise of the capability of doing, being recognized as such by all communities and people living in the commune. About 4,000 people in the case of the Socialist Victory.

“Every time a problem arises in our territory, we hold a communal assembly. Our leaders meet to talk about the needs and priorities according to the commune’s management,” Deiker adds. The commune defends its own policies.

The exemplary social property company in the commune is their bakery. Producers were elected in assemblies and the proposal was to meet three major issues: meeting personal needs —this is not based on minimum wages—, capacity to replace machinery, and a surplus managed by the commune.

Surpluses have allowed, for instance, to help paying the costs of funeral ceremonies in the community; organizing events such as children’s days, carnival festivities and school maintenance. “All of it is a purpose for the company,” Deiker explains.

“We can argue here and anywhere that social property is sustainable indeed, that a system with social ownership of the means of production is sustainable.”

RELATED CONTENT: How Neighborhoods React to the Economic Blockade in Venezuela

Since 2015, when they started with communal savings, a fundraising system in which families make contributions every month was set up. “That is living in a commune,” he detailed. The combination of savings and surplus has allowed them to have their own communal revenues. They however had to adapt to the current situation.

“We are amidst a hyperinflation due to a war. Thus, we’ve had to be more dynamic. We do not keep the money. We receive a contribution and we invest it right away purchasing items even if we do not need them. We’ve got to invest money in foreign currency so as to get supplies for the commune.”

The current situation has made them look for new answers, to become a space of resistance to withstand the impact of the economic blows. “We are part of trench warfare because health and food are targets of the enemy and we are defending them,” he comments.

Most of the communal activities are focused on social dimensions, on the needs of the population due to the situation. As a matter of fact, they launched a service for children who spend their days in the streets, with a view to give them food, support and education. The commune is seeking to answer concrete demands from its territory, from its homes, all in the face achievements that are going backwards.

“Concerning the youth, one of our tasks is to explain to them that things that seemed normal, such as eating the traditional roast pork leg on December or going shopping to the mall, were in fact battles that we had conquered. It is not that the Revolution is taking from them a social victory they already had. It is the enemy of the Revolution that is trying to end with these achievements.”

Deiker has been a member of the communal council since he was 15 the legal age to be nominated for the position of spokesperson. He was convinced about it even before, since the day Chavez visited the emerging commune back in 2010 and when he went to pay his last respects to the late President in March 2013. Many battles have been fought since then. He remembers the phase between 2015 and 2016 when the government’s Local Food Production and Provision Committees did not exist yet and shortages were the major issue.

The commune, the hill, the town in it, they are all the evidence of the city that withstands collectively. A Caracas invisible from the other city, but very real for its communities, neighbors, and its social fabric. In there is the invisible Chavism and it is an essential variable: the legitimacy of people’s communal leaders who day to day keep their dream going for something.