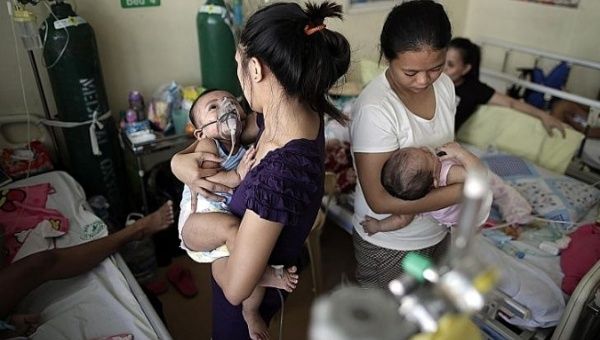 The world is in the middle of a global measles crisis, both executive director of Unicef and director general of the World Health Organization (WHO) wrote in a article for CNN, amidst an unprecedented and dangerous outbreak of cases around the world, mainly in developed nations.

According to WHO data, preliminary global evidence shows that reported cases rose by 300 percent in the first three months of 2019, compared to the same period in 2018. This follows consecutive increases over the past two years.

“By the time you finish reading this, we estimate that at least 40 people — most of them children — will be infected by this fast-moving, life-threatening disease”, assured the executive director of UNICEF, Henrietta Fore, and director general of WHO, Tedros Adhanom Ghebreyesus.

The spike, the United Nations (UN) warned, is a result of conflict, complacency, and misinformation. In some countries, the anti-vaccine movement (anti-vaxxers) is threatening to reverse years of research that, until now, has curbed the disease. The U.S. is facing the second greatest number of cases since 2000 and this past week, New York City declared a public health emergency due to the rapid spread of the virus.

Other developed nations such as Japan are also struggling with the country’s worst measles outbreak in over a decade with more than 170 new cases diagnosed since the beginning of this year, Japan’s national media outlet, NHK, reported back on February 2019.

Over recent months, spikes in #measles case numbers have also occurred in countries with high overall vaccination coverage, including ?? as well as ??, ??, and ??, as the disease has spread fast among clusters of unvaccinated people. https://t.co/fY27Rlzlqw pic.twitter.com/F9DmxGNRto

RELATED CONTENT: Meet the Team of Venezuelan Technologists Who Saved Babies’ Lives in the Middle of the Crisis (Video)

While this data is provisional and not yet complete, it indicates a clear trend. Many countries are in the midst of sizeable measles outbreaks, with all regions of the world experiencing sustained rises in cases. Current outbreaks include conflict and neglected areas such as the Democratic Republic of the Congo, Ethiopia, Madagascar, Sudan, Thailand, Ukraine, Philippines among others, causing many deaths – especially amongst children.

By being one of the world’s most contagious diseases, it has a high rate of deaths and complications. In up to a quarter of cases it can lead to lifelong disability, such as brain damage, blindness, and hearing loss. Just in 2017, the most recent year for which estimates are available, it caused approximately 110,000 deaths.

However, the disease is almost entirely preventable through two doses of vaccines. For several years, global coverage with the first dose of measles vaccine has stalled at 85 percent, falling short of the aim by 10 percent of the objective. While as the second dose coverage has increased it still stands at 67 percent.

“It is unimaginable that we have deaths because of measles – children dying because of measles. We promised that by 2020 Europe would be measles-free,” European Union’s health commissioner, Vytenis Andriukaitis told the Guardian in 2018.

In February 2019, this trend had its effects in Latin America when an unvaccinated French boy reintroduced measles to Costa Rica, five years after that country was free of the disease. The parents of the boy are anti-vaxxers.

Meanwhile, on March 5, a nationwide cohort study was published showing that of all Danish-born children between 1999 to 2010 concluded that the mumps, measles, and rubella (MMR) vaccine does not increase the risk or trigger autism.