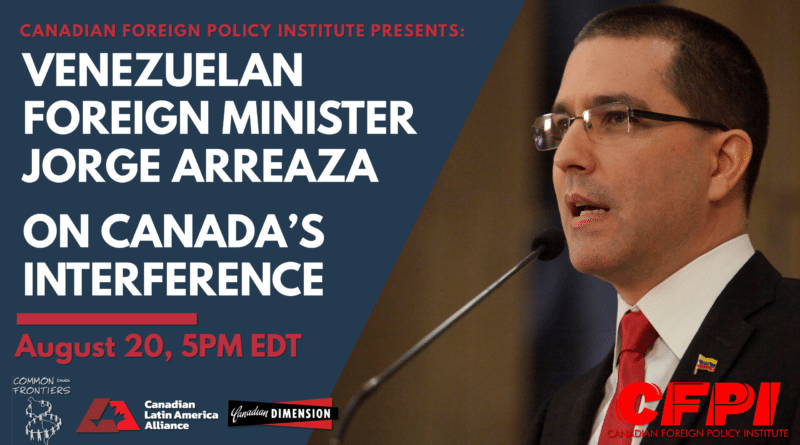 Despite claims to objectivity and fairness, when it comes to Canadian interference in other countries’ domestic affairs, there’s long been only one side to the story reported in the dominant media.

Even so, the pro-Ottawa slant on Venezuela is shocking.

Recently Venezuelan Foreign Minister Jorge Arreaza published an op-ed titled “Regime Change with a Human (Rights) Face: Trudeau’s Venezuela Policy”. The commentary notes, “Relations between Venezuela and Canada are currently at their worst point. Although previous Canadian governments did not hide their dislike for our policies aimed at reclaiming sovereignty over our natural resources and prioritizing social policies, none had so actively imitated the U.S. regime change policy as much as the current Trudeau Administration.” Arreaza criticized Canadian sanctions on Venezuela and noted that “Canada was the only country in the world that specifically forbade Venezuelan diplomatic missions” from allowing Venezuelans to vote during the May 2018 election. Venezuela’s former vice president also invited Foreign Minister François-Philippe Champagne to meet to discuss restarting diplomatic relations.

Few saw Arreaza’s op-ed since it was published in The Canada Files, an upstart left-wing website. But, the article was submitted to a number of major daily papers. Apparently, the Globe and Mail, Toronto Star and others didn’t consider criticism by the foreign minister of a country of 30 million, that’s had diplomatic relations with Canada for seven decades, important enough to offer their readers. Blind to the irony, they would likely justify their decision on the grounds that Venezuela’s government is authoritarian and suppresses oppositional voices!

In September lawyer Andrew Dekany published a long article arguing that Canada’s first round of sanctions on Venezuela contravened Canadian law. Licensed to practice in Ontario, Dekany wrote that the August 2017 sanctions weren’t in accordance with Canadian legislation stating that international sanctions be adopted only as part of international alliances. As such, the Trump administration aided the Trudeau government by creating the US-Canada “Association Concerning the Situation in Venezuela” to conform to the existing sanctions legislation. In a Venezuela Analysis article titled “Do Canadian Sanctions Against Venezuela Violate Canadian Law?”, Dekany writes, “there is no reason for Canada to ‘create’ this association but for its desire to help the U.S. out [by sanctioning Venezuela], having failed to persuade the one obvious organization (Organization of American States) which it had democratically joined to, among other things, act in such a way.” I couldn’t find any mention of Dekany’s arguments in any major Canadian media. (The Toronto Sun published an op-ed on the subject by Dekany in 2017.)

An April 2019 Center for Economic and Policy Research report written by prominent economists Jeffrey Sachs and Mark Weisbrot concluded that 40,000 Venezuelans may have died in 2017 and 2018 as a result of US sanctions. The intensity of the US sanctions, as well as their impact on Venezuelans’ ability to eat and access medicine, has grown significantly since then. A search of Canadian Newsstand, Toronto Star and Globe and Mail elicited two mentions of Sachs and Weisbrot’s findings (A Halifax Chronicle-Herald story titled “Four million Venezuelans have fled crisis: UN” mentioned it at the bottom of the story and an op-ed in the Hill Times by Canadian Foreign Policy Institute director Bianca Mugyenyi.)

Since the fall of 2017 Canadian taxpayers have been paying a hardline pro-corporate, pro-Washington, former diplomat hundreds of thousands of dollars to coordinate the Liberal government’s bid to oust Venezuela’s government. There’s been total silence in the dominant media about Allan Culham’s role as Special Advisor on Venezuela.

As Arreaza pointed out in his op-ed, the Trudeau government’s Venezuela policy took a sharply belligerent turn after Donald Trump became president and Chrystia Freeland replaced Stéphane Dion as foreign affairs minister. In reaction to Freeland’s January 2017 appointment an official at the US embassy in Ottawa claimed Justin Trudeau appointed her to promote the interests of Washington. In July 2019 researcher Jay Watts disclosed a dispatch from the US embassy in Ottawa to the State Department in Washington entitled “Canada Adopts ‘America First’ Foreign Policy.” Uncovered through a freedom of information request, the largely redacted cable also notes that Trudeau’s government would be “Prioritizing U.S. Relations, ASAP.” Despite all kinds of fawning coverage of Freeland, the dominant media has completely ignored the US cable.

In A Propaganda System: How Canada’s Government, Corporations, Media and Academia Sell War and Exploitation I detail extreme media bias in favour of power on topics ranging from Haiti to Palestine, investment agreements to the mining industry. Considering the pattern, the Venezuelan coverage is not surprising.

But, the growth of left and international media, as well as social media bubbles, makes it is easy to forget how few Canadians are actually receiving this critical information. Canadian media rejecting a commentary by the foreign minister of a country of 30 million is a reminder of just how biased foreign policy coverage is.