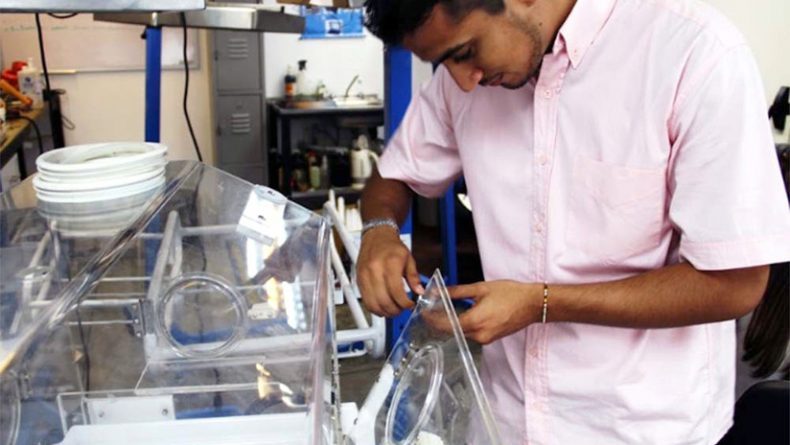 Although they did not have previous knowledge in electromedicine, these young people do everything possible to learn and fulfill a promise: not to leave an incubator out of service in Venezuela.

The commitment of a Venezuelan scientist in a televised presidential broadcast was unequivocal: “Before the end of this year, there will not be an incubator out of service in Venezuela.” How would you achieve it, in a country in crisis, suffocated by financial sanctions? That’s what this story is about.

If only the image of a newborn baby inside an acrylic structure where an intensive treatment is applied to preserve its fragile life is moving, the possibility that they do not have access to it because it does not work causes anguish.

Faced with a problem of this magnitude, a group of young Venezuelan scientists put all their knowledge into practice to face up to something then unknown: the repair of medical equipment.

Commitment
“Send us some incubators, they can’t get worse,” Gloria Carvalho Kassar, the young Venezuelan engineer, president of the National Center for Development and Research in Telecommunications (Cendit), told the governor of Miranda State, Héctor Rodríguez, after a meeting with scientists that occurred at the end of 2018.

Rodriguez, who won the governorship in October 2017 – occupied almost a decade by the opposition Henrique Capriles Radonski – presented at that meeting the main problems in neonatal care centers, including the poor state of the incubators.

The solutions that had been presented to the governor “were equal to dollars”, the president of the telecommunications foundation told RT. “On that occasion we said: ‘We are very good at electronics but we do not know anything about medical equipment.'” Despite the apparent limitation, he asked to be sent several incubators and ten days later they were repaired.

Hands to incubators
In an office full of tools and boxes, technologists explain their work. The first to appear is Carlelinés Gavidia, engineer in telecommunications who directs the Communication Electronics Unit of Cendit and the recovery project of medical equipment that supports the foundation, through the Ministry of Science and Technology, together with the government.

She says that it is not just about repairing incubators, but also about cervocunas, phototherapy lamps, autoclaves or sterilizers, nebulizers, electrocardiograms, multiparameter monitors, ovens and centrifuges (used in clinical laboratories).

Thus, they divide these tasks with their daily activities, which correspond to prototyping of communication electronics, antennas, decoders of open digital television, dongles, among others.

Learning with manuals
Francisco Ortiz, a worker at Industrias Canaima, a state-owned computer equipment company, whose workers were included in the project, said he had to study equipment manuals, verify their calibration and operation and determine the critical points to later replace the parts.

On the other hand, Gavidia adds that, as they did not know the teams, they had to make sure about the meaning of each symbol and how the pieces were related. In cases where there was no information on the device, they called a doctor or specialist to explain their operation.

These Venezuelans move as if they were archaeologists among the pieces . “If we do not have the components, then the real work comes, because we have to look for one that can replace it and get it in Venezuela,” said Orlando Villarroel, mechanical engineer and coordinator of Cendit’s Mechanical Design unit.

Since September, they began with this task, they have improved their times to detect faults and repair the appliances. Remember that before they could take between two and three hours but now they do it much more quickly. In total about 80 people participate, including workers of the telecommunications foundation and Canaima.

Babies in hospitals
Although the headquarters of Cendit is located in the extensive Simón Rodríguez Technology Complex, of La Carlota Air Base, in Caracas, its work is not confined to that space, since they have also been transferred to hospitals to repair the devices.

Gavidia says that seeing a baby inside an incubator, which had been arranged in the Maternal and Child Hospital of Petare, “we feel it has been worth it because we give life to a person who needs it, the fact that a baby is born and he/she needs an incubator because it was not born at term”, she says.

In addition to that experience, the teams have mobilized to the health centers to make the so-called “cayapas “, which is a Venezuelan indigenous word to describe a collective work.

In the Maternidad Concepción Palacios, the most important in Venezuela, they renovated 187 devices among incubators, multi-parameter monitors, infusion pumps (in charge of injecting fluids, medication or nutrients into the patient’s circulatory system).

Similarly, they have been in hospitals in peripheral areas of Miranda state, such as Victorino Santaella, in Los Teques; Ernesto Regener, in Río Chico; Hermógenes Rivero Saldivia, in Caucagua and the Cirila Villegas Maternity, in Tacarigua de Mamporal.

Until March, when this interview was held, they were waiting for vehicles to travel within the country “and fulfill our promise,” said Carvalho.

Seamstresses in action
An incubator is not only composed of its structural parts, it also has additional elements such as mattresses, filters and consumables.

A group of women, with their hands and a pair of sewing machines from their homes, make them with textiles from hospital bed centers and medical gowns, in addition to foam rubber and elastic.

“When we have cayapas we turn on the machines, we make food and we have fun: There is a short boy who is told to lie on a mattress to test if it was good,” says Carvalho.

Why repair them?
In 2005, during the government of Hugo Chávez, the first 500 incubators were received as part of the Argentina-Venezuela agreement. In this way, between 70 and 80% of these devices were acquired in the country.

According to Carvalho, the company in charge of providing the spare parts and providing the specialized service stopped doing it at the beginning of the government of Mauricio Macri -who qualifies Maduro as “dictator” – due to supposed debts, even though Venezuela had paid for them in advance.

The reality was worrying: between 600 and 700 damaged incubators, in the middle of a sanctioned country and whose public health system was questioned by the media. “What do we do? Do we sit down and cry? Do we buy new incubators?” Asked the Cendit director.

Each device costs between 5,000 and 7,000 dollars . An impossible expense for a country that is going through an economic crisis and the blockade of its accounts abroad by the United States. “We said: ‘Of course we can’, and we currently have 250 repaired,” adds the engineer of Telecommunications and also doctor in Electronic Devices of the University of Torino, in Italy.

The bet, which is already well advanced, still stands, and has saved the country approximately one million dollars.