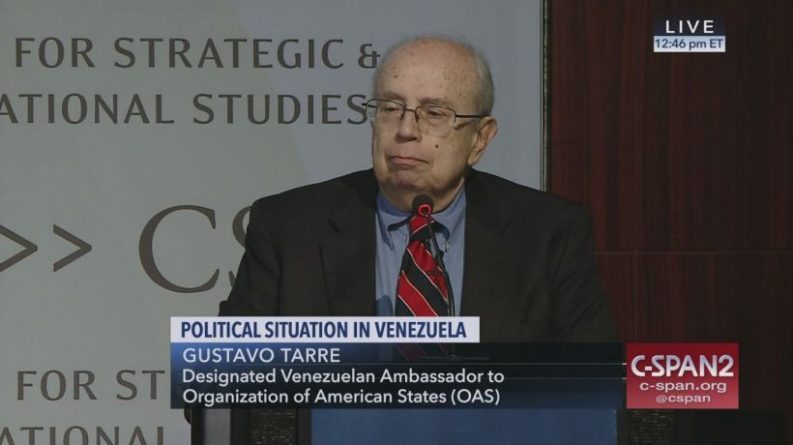 The Guaido’s new “ambassador” to what remains of the OAS, born in Caracas in 1946, Gustavo Tarre Briceño is remembered among the memory of the last years of the Fourth Republic (the pseudo-democratic regime that ruled Venezuela before Hugo Chavez) as a politician who climbed positions in the old Congress to become parliamentary chief in the Chamber of Deputies of the party in which he played: the Independent Electoral Political Organization Committee, better known as COPEI.

The son of a politician of renown in his time, Alfredo Tarre Murzi , who was also a lawyer, diplomat and journalist (he published under the pseudonym Sanín), gave a nod to his eldest son who “made his way with his own voice in the rows of Copei, although I feel he should write more”, daddy said.

Graduated from the Central University of Venezuela and postgraduate studies at the University of Paris, his career as a constitutional lawyer and university professor took an important turn with his participation in one of the founding political parties of puntofijismo (COPEI), a raising power from the 1970s.

In addition to law, he was also trained at the Institute of Higher Studies in Administration (IESA), where the leading Venezuelan neoliberal technocrats come from.

Since 1994, as a deputy for the then Federal District, he legislated in favor of Copei interests in a context of ruin for the traditional political parties of Venezuela, which were discredited by the population over the decades and relegated to the background with the emergence of neoliberal privatizations and the Oil Opening during the second presidency of Rafael Caldera.

In his book Las intrigas del poder (1997), journalist Juan Carlos Zapata places Tarre Briceño on a list of politicians who favor reforms imposed by the technocrats of the Washington Consensus (the “cybernetics”), contrary to those whom he called “dinosaurs” like Luis Alfaro Ucero of Acción Democrática and Hilarión Cardozo himself, who was president of Copei.

In this way, Tarre can be qualified as one of the most enthusiastic in politics of social reduction and profit maximization for the private sector, at the same time as a consultant and adviser to companies and think tanks in Washington, United States, since 1999 .

IN THE EDGE OF THE COUP

After the failed military insurrection led by Lieutenant Colonel Hugo Chávez Frías, Tarre Briceño published in 1994 a book ( El espejo roto ) in which he wrote his memoirs around February 4, 1992, in which he turned all his contempt on the Bolivarian rebellion.

Over the years, and as was to be expected especially with the arrival of Chavez in Miraflores in 1998, his belligerence was increasingly noticeable, today seen through his column in El Nacional. It was the reaction of the elites to the national commotion that Chavismo meant. It is not strange that characters like former Copei militants have conspired against (the Bolivarian government), especially with the kind of connections at the American level that our character has.

His connection with the IESA, closely linked to the technocratic school of Chicago (current Milton Friedman and onwards), and its current work as a senior associate of the Center for Strategic & International Studies, a think-tank funded by ExxonMobil, Citigroup and Lockheed Martin, among others, all corporations with interests in Venezuela and oil wars around the world, make him worthy of more than one suspicion.

In 2014, he was accused by the Venezuelan government of participating in a conspiracy plot to assassinate President Nicolás Maduro and overthrow his government, being implicated by María Corina Machado.

The current Minister of Communication, Jorge Rodríguez, showed e-mails as proof that Tarre Briceño did know about the plans for the assassination and color revolution of that year.

In one of the emails written by Machado to Tarre, we read the following excerpt from the conversation: “We have a checkbook stronger than the regime, to break the international security ring they have created by means of money given away which belongs to all Venezuelans “, perhaps in reference to the bankers fugitives living in Miami, including Eligio Cedeño, identified as one of the main financiers of the sedition movements.

In another extract, Machado confesses to Tarre: “(…) street, more ungovernability, the action of the activists in the Metro, Metrobus, Bolivarian high schools, public universities, everything, everything, we are going to invade with women expressing the desperation of living in a country without freedom”, exercises that were seen forcefully in the violent events of  “The Exit” of 2014 and that caused dozens of deaths and hundreds of injuries across the country.

Both anti-Chávez politicians were part of the criminal investigation in question, among others.

Since he was appointed by the National Assembly in contempt as Venezuela’s special representative to the Organization of American States (OAS), Gustavo Tarre has resurfaced on the Venezuelan scene even though his position has no other plausible effectiveness than coordinating actions in that country with the team of Juan Guaidó and Washington’s political creditors.

When his candidacy was approved at the OAS, illegally and against the institution’s statutes, Tarre once again plays an important role in the limits of the coup against Venezuela at this time. Under the Washington strategy, it will complement the actions of the Lima Group in that organization.

He said that his final goal is to bring the so-called “humanitarian aid” to Venezuela, in addition to achieving the call for “free elections.” We will see what he is capable of.