Members of the European Parliament (MEP’s) signed a letter demanding the president of Novo Banco de Portugal, António Ramalho, hand over Venezuelan resources. The funds would be used to pay for vaccines and medical equipment that Venezuela requires in its fight against COVID-19 and other diseases.

Since July 2021, the Venezuelan government has been trying to access around 12.7 million dollars of their own financial resources, for the purchase of vaccines and medical supplies. The Portuguese bank did not even respond to email requests sent by Venezuelan officials.

RELATED CONTENT: The EU and US Imperialism in Latin America. An Interview with Mick Wallace MEP.

In the letter, the MEPs denounce “the unacceptable appropriation of assets from Venezuela, after the illegal sanctions imposed by the US.”

The document demanded, “Act in accordance with international law in this case of extreme urgency and release the funds deposited in Novo Banco, which belong to the Venezuelan bank Bandes. The funds are for saving the life and health of Venezuelan children.” The demands in the document have been signed by 37 parliamentarians, among them João Pimenta Lopes, deputy of the European Left Group. 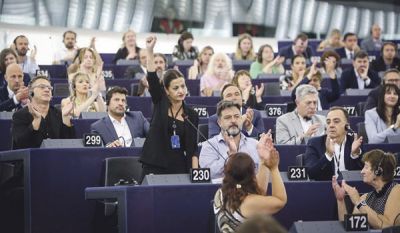 Venezuela’s Deputy Minister of Foreign Affairs for Europe, Yvan Gil, declared, “It’s a robbery. There is no reason to withhold the payments. We hope that legal order can be restored very quickly. We believe in justice. Justice has to act.”

In turn, this year, the Portuguese justice allowed Venezuela to manage its assets in Portugal, as long as it was authorized by a judge. This decision was a response to a process opened in 2020 by the Venezuelan government. Novo Banco, however, has continued to block around $1.5 billion of Venezuelan public money since 2018.