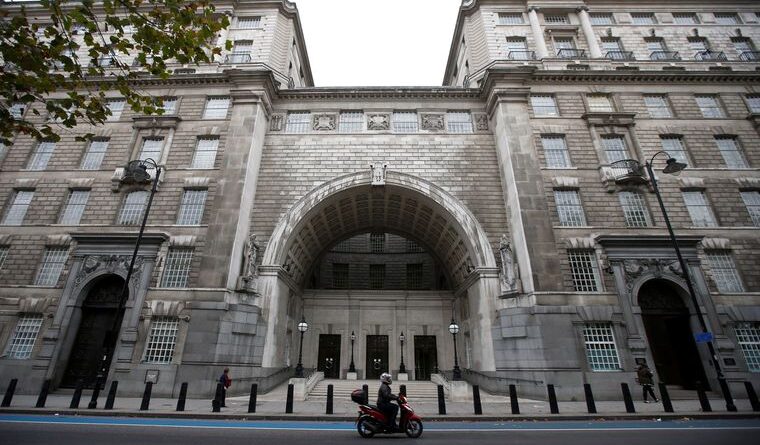 According to the BBC, ‘MI5 has up to 700 staff in Northern Ireland based at regional headquarters in Holywood, County Down. It took over the lead role in intelligence gathering on dissident republicans from the police in 2007. The operational framework was set out as part of the St Andrews Agreement a year earlier’.

On its website, MI5 claims to have had fewer than 50 operatives working out of Stormont Castle during the ‘Troubles’

As republicans may testify they faced a plethora of state agents and state intelligence agencies during their ‘war of liberation’ to include Police Special Branch, the military reaction force, force research unit, the SAS, and who knows what other shadowy agencies played a part in the dark and dangerous world of spies and informers.

Before 2007 the Police service of Northern Ireland and the prior to that the Royal Ulster Constabulary led the states fight against the Irish Republican Army and the Irish National Liberation Army.

It ran agents and informers who gathered information on both Loyalist and Republican proscribed organisations to include the Ulster Defence Association, Ulster Volunteer Force and Red Hand Commando.

While accusations of the ‘shoot to kill’ policies against republicans by Margaret Thatcher coupled with persistent and proven cases of state collusion with Loyalist murder gangs, the role of the state security apparatus was first and foremost, the battle to marginalise and eradicate the threat,to the integrity of the United Kingdom posed by militant republicans, battling to end Britain’s imperialist colonial occupation of the North East of Ireland.

This is borne out by the active role MI5 plays in the lead role in securing the state of Northern Ireland within the United Kingdom. MI5 has sole responsibility for operational jurisdiction here against dissident republicans, while the Police Service of Northern Ireland retains primacy over Loyalist paramilitary activities and ordinary crime.

Republicans are viewed as a threat to the state but apparently, Loyalists are not, in fact, they may be deemed at times to be an asset to the state, a local militia?

The whole thrust of British State intelligence work, with a budget of possibly billions, is directed solely against Republicans, North and South of the border which Partitioned Ireland on behalf of British interests in Ireland in 1922.

Republicans and Nationalist have always claimed the security services and the security forces operated here with impunity, using torture, false imprisonment and shoot to kill operations, alongside extra-judicial murders and covert state executions.

Now many people in both Ireland and the United Kingdom see the new security bill brought before Parliament as the next phase of Britain’s dubious and at times discredited security operation in Ireland.

This Act of Parliament may well be a ‘get out of jail card’ for MI5 operatives and others who flaunt the law, break the law and commit crimes ranging from recruitment to proscribed organisations, procurement of arms and ammunition, entrapment, incitement to maim and murder, directing terrorism and prosecuting a war against the state in order to protect the state?

It is my opinion that this new legislation will allow MI5 to operate even more aggressively immorally and illegally against Republicans in Ireland, by becoming not judge, jury and executioner but by becoming the recruiter, organiser and promoter of dissident republican activity by using its embedded assets both inserted and recruited as agent provocateurs within these organisations. The rationale is not to defeat its enemies but to create an endless conveyor belt of young and old republicans being sent to Maghaberry Jail and Hyde Bank prison while securing massive funds for its operation. In effect creating a perfect storm of intercepted missions, compromised leaders and a perceived continued threat to the peace talks and the Good Friday Agreement, the bogey man and woman of Irish Republicanism.

When is the state protecting itself and by extension its citizens from a militarised threat and when is it promoting using and funding that threat?

There are numerous examples of assets within organisation legal and illegal being used to promote illegal activity. These cases have been well documented from the CND movement, socialist organisations and civil society groups where deep cover agents, some of whom had physical relationships with those they were spying on, in order to cement their place in the group, incited violence in order to brand them as criminal and militant in the eyes of the public.

This will legalise what many believe has already happened in Britain’s dirty war against Irish Republicans.

Always remember, the crimes the British establishment commit on the Irish people will eventually be used against its own citizenry.

Thankfully element’s within the British political class are standing against this newly legalised criminality but their voices are few.

Will the trial involving Dennis McFadden, MI5’s star witness against the alleged leader of the New IRA and Palestinian Dr Issam Hijawwi Basalat be the first showcase trial was an undercover operative admits being involved in illegal activity previously held to be criminal but now accepted as the hard face of Britain’s fight against international terrorism?

Why has this legislation been brought forward at this time!

Will it be used in the trial of Teresa May’s would-be assassin, entrapped and possibly set up by the state?

Is it to help keep Dennis McFadden and others out of jail?

The ‘Covert human resources bill’ must be opposed by all those who defend democracy.