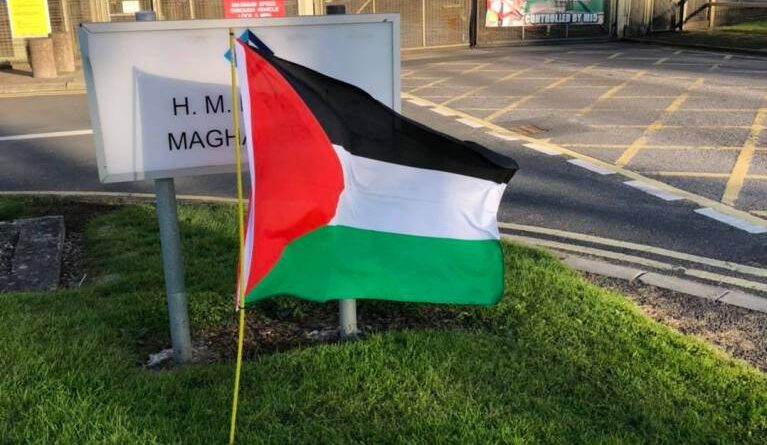 Britain has been involved in duplicity and skulduggery in Palestine from the secret signing of the Balfour agreement in 1917 to ‘establish a national home for the Jewish people in Palestine’ to the partition of Palestine and the eventual birth of Israel on the land of historic Palestine in 1948.

As a Palestinian doctor embarks on a hunger strike in Maghaberry prison just outside of Belfast, can the treacherous hand of Britain be discerned once again?

Ten people were recently arrested in connection with a British intelligence-led MI5 covert operation, which entailed the use of a British intelligence asset in a deep cover role within a republican group, leading to nine group members and one Palestinian being allegedly secretly recorded and filmed during a meeting, where the state claims people self-identified as members of a proscribed organisation namely the New IRA.

Where Dr Issam Hijjawi Bassalat fits into the contrived web of deceit will become clearer when the trial if one is to proceed, will allow his defence counsel to outline his case.

It is my opinion that the state asset undercover operative named as Dennis McFadden, a Scottish ex-special constable, if the state narrative is to be believed, may have set out to entrap the alleged leadership of the NIRA by instigating and promoting ties between Saoradh, a legal left-wing party of Irish republicans, formed in 2016 and the Palestinian diaspora. Did he exploit the sympathetic and symbiotic fraternal bonds of two peoples who have both been fighting colonialism and foreign military occupation?

RELATED CONTENT: Uphold Palestinian Struggle in all its Forms

Dr Bassalat was Chair of the Association of Palestinian Communities in Scotland.

He is a General Practitioner in Edinburgh and a well respected member of civil society.

He previously addressed the Saoradh Ard Fheis in November 2019 and spoke of an approach by Mi5 to recruit him which he rejected.

In his role as an advocate for Palestinian rights and justice Dr Bassalat has addressed many organisations, written to many international individuals, groups and organisations to include addressing the Scottish Parliament.

He has claimed in his defence that has was pestered to address the meeting and update those in attendance on the political reality of life on the ground in Palestine.

“My client speaks to numerous groups on Palestine. He went to the Saoradh Ard Fheis, he was certainly misled. Refusing bail drives a coach and horses through the presumption of innocence. There are issues of entrapment. Hopefully, the prosecution sees sense and drops these charges.”

It appears Dr Bassalt may have been duped, used as it were, in a web of intrigue and deceit spun by British intelligence to entrap republicans still opposed to the British occupation of Ireland.

If Dennis McFadden did mislead Dr Bassalat and pester him to attend a meeting unknowingly of the NIRA leadership? Then surely this is indeed entrapment?

It is claimed many of those in attendance self-identified themselves and are implicated by their own words.

Dr Bassalat was charged on August 24 of this year and remanded to Maghaberry Prison on a single count of ‘preparatory acts of terrorism’.

He was detained in solitary confinement due to the Covis 19 restrictions for 14 days.

He was subsequently taken to a local hospital for an MRI scan due to his ongoing ill health concerns and upon his return to Maghaberry was again placed in solitary confinement for a further 14 days.

While the prison claims this is standard procedure, republicans in the jail state this is not the case as other inmates had left the jail and returned were not subject to these restrictive measures.

Dr Bassalat then embarked on a hunger strike demanding he is released from solitary confinement.

HE WAS SUBSEQUENTLY JOINED BY OVER 50 REPUBLICAN MEN AND WOMEN PRISONERS ACROSS THE ISLAND OF IRELAND ENSCONCED IN MAHGABERRY, PORTLAOISE AND HIDE BANK WOMENS PRISONS.

On Saturday, September 26 at 3 pm a white line picket was held on the Andersonstown Road Belfast and was attended by over 500 people calling for Dr Bassalat to be released from isolation.

Later that afternoon over 200 people attended a vigil at Maghaberry prison where police in riot gear were deployed and many of those in attendance were cautioned under the new COVID 19 restrictions of gatherings of more than 15 people.

With tensions running high between the peaceful protesters and the riot clad police, four arrests were made and those charged with disorderly behaviour will appear in court on Monday, September 28. It suits the state to portray the protest as violent and non-peaceful.

A symbolic protest camp was set up at the jail with many in attendance and further afield embarking on a 24 solidarity fast and some doing substantially longer.

It is hoped Dr Bassalt will rejoin the main inmate population on Wednesday when he and those 50 republicans on a 14 day fast will finish this aspect of the protest.

Dr Bassalt may have been the unwitting tool that has ensnared the alleged leadership of the New IRA but one thing is certain.

Nothing has united the various republican groups, still engaged in opposing Britains continued occupation of the six counties, than the treatment of Dr Bassalat.

While the British State may bask in the glory of an intelligence coup, dealing a decisive blow to dissident republicans, I can assure you the cause of Dr Bassalat and the historical parallels of Ireland and Palestine have united these disparate groups more than ever and may yet have a prophetic outcome.

I believe an opportunity exists for greater cooperation between the groups on the case of Dr Bassalt and indeed the cause of Palestine.

In international law, Palestinians have the right to use any means necessary to free themselves from the illegal Israeli military occupation in the occupied territories and Gaza.

If Dr Bassalat was arrested and incarcerated in Ofer prison in Israel the Palestine solidarity supports groups in Britain Ireland and further afield would support him on his hunger strike and demand his immediate release.

Where are they now?

The second question relates to Dennis McFadden. Unlike paid informers of the past who have been members of republican organisations, who became state informers and must live the rest of their lives in the witness protection programme, looking over their shoulders, many of whom become reliant on alcohol and medication to help them live a life devoid of family and old friends, it appears Dennis McFadden was a paid British agent who was accepted into the republican family to wreak his havoc.

He will not be in a witness protection scheme?

So where is he?

Can we surmise he will be sitting behind a desk wearing his medals while running other informants from within the Republican ranks? Continuing his paid role within the British intelligence community, giving lectures talks and briefings into how to infiltrate your enemy?

This whole operation was designed to entrap republicans and try to destroy the legitimacy of the Palestinian resistance.

All it has accomplished is a temporary set back for republicans and renewed the bonds of friendship between Ireland and Palestine.