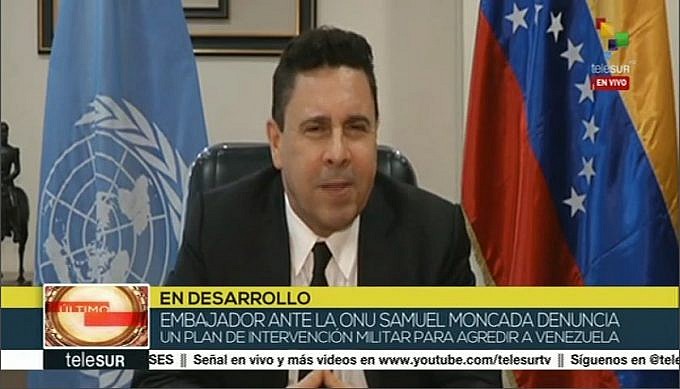 The ambassador of Venezuela to the United Nations, Samuel Moncada, urged countries that have suffered aggressions, through coercive measures, by the United States government, to join in a large international conference to debate and generate strategies with the aim of countering these actions.  During an interview with the news station Telesur, Moncada said that there are “more than 40 countries” in  the world that face every type of unilateral sanction which can be called “crimes of economic aggression”.

“We should create a great international conference to fight this type of financial aggression, which is a new weapon, on a global scale,” said the diplomat, who in turn questioned the IMF for being an entity driven by US management.

He pointed out that these countries need to understand that this type of war can be fought successfully but requires the support of the international community. “United we can defeat the abuses of the United States,” he said.

And he continued, arguing that the United States maintains a constant campaign of aggressions against the country through economic sanctions against State officials, seeking to promote coups with the Venezuelan extreme right, and with the support of the Colombian government and other accomodating governments.

Moncada reiterated his denunciation of a secret meeting held on April 10 in US territory for the purpose of discussing a plan that involves the use  of military force to intervene in Venezuela. “You can’t believe a single word from the United States because it is a government at war.  They support assassination, military coups, a fracturing of Venezuela as in a civil war and an army of mercenaries,” he said.

On Monday,  Moncada posted to his Twitter account revelations about the meeting, made by Max Blumenthal of the Grayzone Project, held at the Center for Strategic and International Studies, (CSIS) which functions as an agency that promotes the war against Venezuela from Washington, D.C.

Moncada said there were 40 “traffickers of war” who participated in the meeting to agree on an armed intervention in the country and he assured that the CSIS is financed by large American oil companies and weapons manufacturers.

Related content: US Calls on Countries to Deny Airspace to Russian Planes Destined for Venezuela

Last Wednesday, on April 10, a secret meeting was held where participants were US experts, with representatives of various regional countries, in which a military intervention was planned against the Venezuelan leader, Nicolas Maduro.

A call for unity among Venezuelans

The Venezuelan representative to the UN called on the people remain united in the face of US actions that seek to destabilize and strangle the economy with unilateral measures. “For our people the call is to unity, to peace, conscience and maximum organization. Clarity of where peace lies and why we must defend it because our homeland will overcome these difficulties,” he said.

He added that it is possible to defeat Donald Trump’s war against the Venezuelan people.