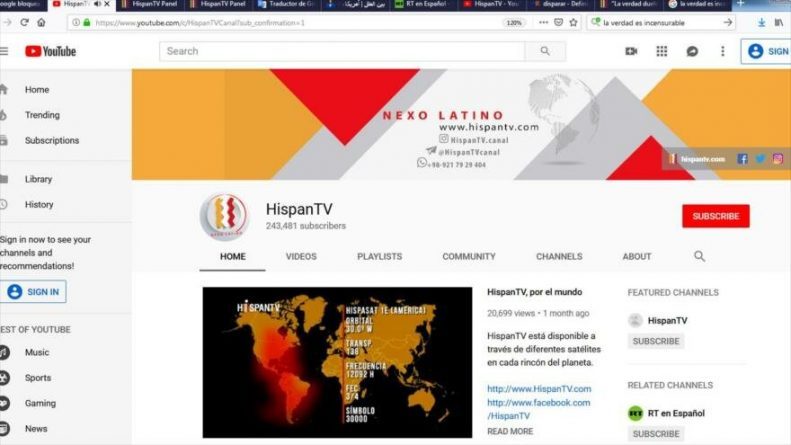 The American corporation Google blocked the access of HispanTV to YouTube on Thursday, but in reality, what will be the result of this systematic censorship?

HispanTV is a Spanish-language television channel with a large audience around the world, particularly in the United States and Latin America. The chain’s account, to which the staff can not add new content, currently has more than 243,000 subscribers .

This independent news outlet has been subject to media censorship on other occasions. The last case occurred in August 2018 when Google blocked HispanTV’s access to its YouTube channel and Google Plus and as a consequence the accounts of HispanTV, HispanTV Programas, HispanTV Documentales and HispanTV Films and Series were closed.

Before being blocked last August, a total of 527,000 users had subscribed to the YouTube channel of HispanTV and once the censorship was implemented, the number skyrocketed to more than 637,000. All this shows that the efforts of imperialist powers to silence the voice of truth are unsuccessful.

“This media war against HispanTV and all the networks that transmit the reality of events will never have results … the voice of reason will prevail despite all the measures of the West and the colonial countries. The sun can not be hidden with a finger, ” a chain reader reported in August.

Google has also closed as of Friday the channel’s access in English called PressTV. The American technological giant justifies this measure, indicating that it found violations to its rules, although it does not offer details.

Both television networks have been objects of media censorship on repeated occasions. The YouTube video sharing platform blocked the live broadcast of HispanTV in mid-2017 and, in 2012, the Spanish satellite provider Hispasat stopped providing services to HispanTV and  “Press TV network”.

The Iranian authorities have repeatedly denounced these offensives against the Iranian media, which always promises to be the voice of the voiceless, as constituting a flagrant “violation of freedom of expression and the free flow of information.”