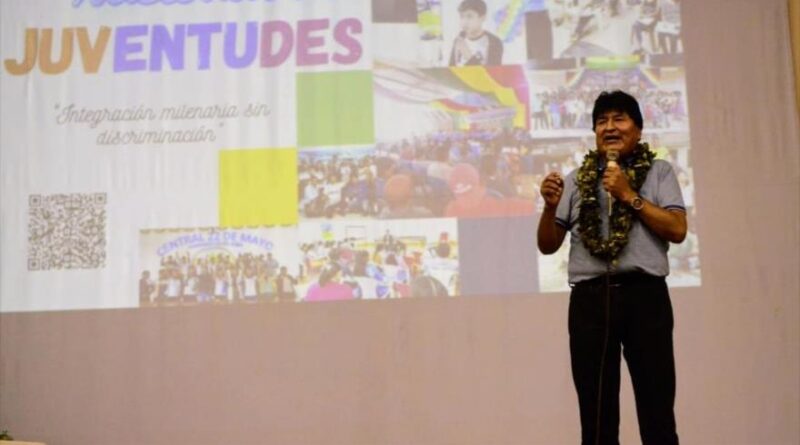 Former President Evo Morales accused the European Parliament of having a “colonialist mindset” regarding the nations of the region, and condemned their resolution against Bolivia.

In an open letter addressed to the “old continent” via his account on the social network Twitter, Morales expressed this Tuesday his “great surprise” concerning last week’s approval of a resolution by the European Parliament, in which it called for the release of the former president of the de facto government, Jeanine Áñez, labeling her detention as “arbitrary and illegal.”

“This clearly demonstrates how some sectors of Europe still retain a colonialist and humiliating disposition towards the peoples of Latin America and the Caribbean,” asserted the former Bolivian president when addressing the media; he lamented also that “more than five centuries have passed since colonization and it still seems like it happened yesterday.”

Morales also censured the European Parliament for “intervening in the internal affairs” of Bolivians, violating international principles and making “absolutely false statements and assertions” in “an excessive manner.”

He reminded everyone that the Secretary General of the Organization of American States (OAS), Luis Almagro, was an “accomplice” of the 2019 “Bolivian coup,” which took place after the elections in that country, and questioned the silence of the European parliamentarians when it came to the violations that were committed during the year that the de facto government held power.

Referring to “a year of coup, persecution and serious human rights violations, with 38 dead, 800 injured, and close to 2,000 detainees,” the former president wondered “where were the European parliamentarians during that year? Is the life of the Indians worth nothing to them? Does a worker, laborer, miner, teacher, an Indigenous person, a woman, a young person hold less value for the human rights and democracies of the West?” He added.

RELATED CONTENT: Despite US Dirty Tricks, Bolivia is Finding a Way to Stay Independent

Noting the “overthrow” of his presidency in 2019, Morales denounced that his only “crime had been being Indigenous and promoting a cultural democratic revolution.”

Additionally, he reminded the European Parliamentary Members that Bolivia has decided to construct its own history and that it is exercising its sovereignty with dignity and identity, and that it is no longer “a colony or anyone’s backyard.”

The European Parliament statement has also been rejected among the ranks of Morales’ party, the Movement for Socialism (MAS). The president of the Chamber of Deputies of the Andean nation, Freddy Mamani, questioned the statement and labeled it as “interference” in the internal affairs of Bolivia.

On March 13, the Bolivian police arrested Áñez and four of her collaborators after the Bolivian Prosecutor’s Office requested their apprehension to answer for the crimes of sedition and terrorism, as well as for charges related to the 2019 coup d’état against Morales.