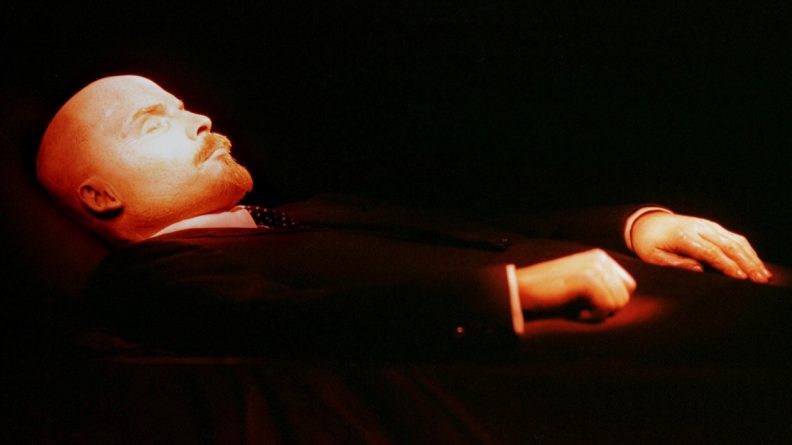 ‘He Doesn’t Bother Anybody. Let Him Stay’

The body of Vladimir Lenin should be left in the mausoleum on the Red Square as there are much more important problems for Russia to solve, some Parliament Members (MP) said on the 95th anniversary since the death of the 1917 Revolution leader.

Lenin died on January 21, 1924 after being unable to recover from an assassination attempt a few years earlier. Shortly after that – despite heavy protests from his wife – the 53-year-old’s body was mummified and placed on public display in a mausoleum in the heart of Moscow. The Bolshevik leader’s corpse has remained there for years, but since the fall of Soviet Union in 1991 calls for it to be removed and laid to rest are heard every time an important date related to the Communist icon approaches.

Burying the Bolshevik chief should be the least of Russia’s worries as “there are a lot of internal problems in the country. We are in a difficult situation on the international arena,” high-ranked Communist Party MP, Yiry Afonin, said.

“Those, who promote this issue, are provocateurs… working to split the society,” he said, adding that the polls show that more than half of the Russians oppose committing Lenin to earth.

A poll, carried out by Levada-Center in December, revealed that 41 percent rejected the idea of the burial, with exactly the same number of respondents saying that it should be done. 18 percent were undecided.

“Lenin doesn’t bother anybody. Let him stay there,” Mikhail Yemelyanov of the Fair Russia Party said. The deputy expressed a belief that the fate of Lenin’s corpse should be decided by future generations, who will be able to treat the issue “from historical, but not a political angle” as it happens now.

The ruling United Russia Party “hasn’t worked out a stance on this issue,” Andrey Isaev, the deputy chief of the party’s parliamentary faction, said, adding that “the society currently faces much more pressing tasks.” One of the top MPs in the Liberal Democratic Party, Yaroslav Nilov, has branded Lenin “an anti-hero” and expressed confidence that he will eventually be put to rest, but it won’t happen now.

“I’m sure that one of the reasons for the current problems in our country is that this connection with our [Communist] past isn’t severed on the energetic level because Lenin isn’t buried,” he said.

“When parades and other events are held, people are standing and sitting on the Lenin Mausoleum; there’s singing and dancing. And it’s not in line with the Christian customs. It’s inhumane when a man’s body is laying on the Red Square, with his soul not finding eternal rest,” Nilov explained.

Last week, the director of the Gulag Museum and member of the presidential human rights council, Roman Romanov, said that it “would be realistic to bury Lenin now,” calling such move a “step forward for Russia.”

The space freed at the mausoleum after the removal of the body should be used to create a museum of ideology, he suggested.

The idea of committing the Bolshevik chief to the ground had been voiced by numerous politicians and attention-seeking public figures over the last three decades. Those behind it cite costs of maintaining the tomb and the mummified body, the Orthodox traditions, and necessity to “bury the Communist past” of the county.

The Kremlin, however, never allowed itself to be dragged into the controversy, saying that the move would have little practical value, but would offend a lot of people.