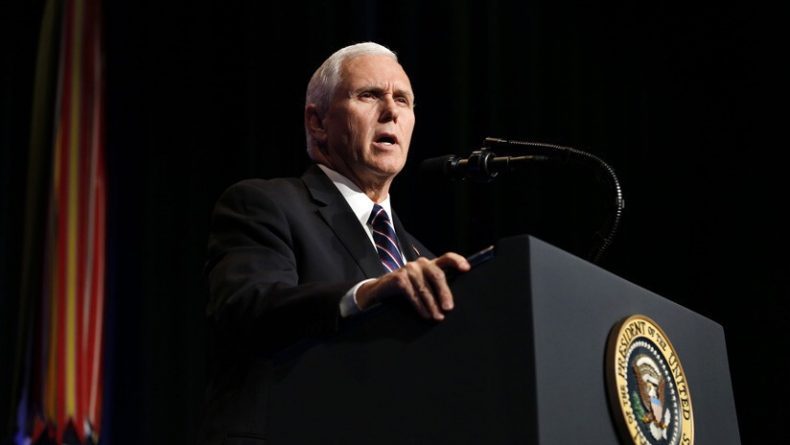 “We are with you,” said the US vice president through his Twitter account. The vice president of the United States, Mike Pence, sent a message of support to the Venezuelan opponents who will protest this Wednesday against the government of Nicolás Maduro. “We are with you and we will stay with you until democracy is restored”, say the VP talking on behalf of President Trump.

As the good people of Venezuela make your voices heard tomorrow, on behalf of the American people, we say: estamos con ustedes. We are with you. We stand with you, and we will stay with you until Democracy is restored and you reclaim your birthright of Libertad. pic.twitter.com/ThzIAqBoRn

Pence posted a video on his Twitter account where he expresses, “in the name of President Donald Trump and the American people,” his support for the march that the National Assembly has convened – which is in contempt and whose acts are null, according to the Supreme Court of Justice (TSJ) – “to begin the steps of a transitional government”, according to deputy Juan Guaidó, who has proclaimed himself “president in charge” of Venezuela.

“We will stay with you until democracy is restored and claim your birthright of Liberty,” wrote the US vice president.

In the clip, less than two minutes long, Pence affirms that “Maduro is a dictator with no legitimate right to power, he has never won the Presidency in a free and fair election.”

Washington cataloged the presidential elections of May 20, where the Venezuelan president was re-elected with 67.8% of the total vote, as “illegitimate” and “fraudulent”, so they did not accept the results of the elections.

Pence affirmed that he recognized the AN as “the last democratic instance” in the South American country and his “agreement” on the “usurpation” of the Presidency by Maduro, despite the fact that the Supreme Court ratified the “nullity” on Monday and “unconstitutionality” of the acts emanated from the board of directors of the Parliament.

This Wednesday, January 23, when it is 61 years since the fall of Marcos Pérez Jiménez’s dictatorship, both the government and the opposition have called for mobilizations in Caracas and other cities of the South American country.

The Venezuelan Vice President, Delcy Rodríguez, denounced that her US counterpart. has been “openly calling for a coup in Venezuela.”

“We will not allow them to interfere in the affairs of Bolívar’s homeland,” said Rodríguez, who recalled that there will also be a mobilization by Venezuelans, convened by Chavismo to back Maduro’s mandate and national sovereignty.

“We -the Venezuelans- are going to march, we have permanently given a lesson of democracy to those sectors to whom you command,” she said.

Hours later, the Venezuelan president announced that he will analyze relations with Washington to a “total and absolute revision”, following the statements of Pence, whom he pointed out to promote destabilizing actions to depose his government.