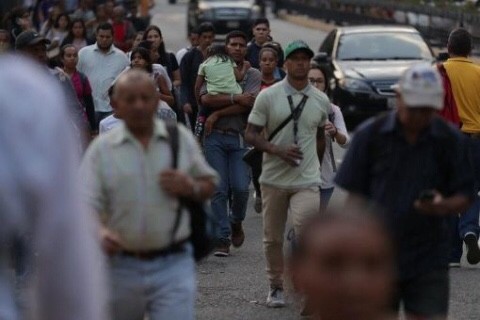 Venezuela suffered a nationwide blackout in the afternoon on Thursday, March 7.  Government officials denounce sabotage and promise to restore the country to 100 percent electrical service over the coming hours.

On the ground reporters for Venezuelanalysis.com currently without means of presenting updates until electricity is restored.

Since 5pm this Thursday, March 7, Venezuela has suffered a nationwide blackout. The Minister of Electric Power, Luis Motta Domínguez, denounced that the blackout was caused by sabotage to the central hydroelectric power plant and transmission area, located in El Guri, Bolívar state. Minister of Communication and Information, Jorge Rodriguez, in a statement made yesterday in VTV also denounced that the blackout was the result of “criminal and brutal sabotage against our electricity generation system” aimed at harming the Venezuelan people and generating general chaos and despair.  Minister Rodriguez pointed out that US Senator Marco Rubio had announced just last week that Venezuela was just “days away from grave scarcity of food and fuel.” He also noted that Rubio sent out tweets announcing the blackout just minutes after it occurred. President Nicolás Maduro also responded with a Tweet last night denouncing the “announced and directed by US imperialism against our people” and promising that “it will be defeated.”

Electricity has now been restored to the eastern states of Anzoátegui, Monagas y Nueva Esparta and some sectors of Caracas, according to announcements made by Vice-president Delcy Rodriguez yesterday evening, also announcing measures to suspend all school and formal labor activities for Friday, March 8.

Minister Jorge Rodriguez has reassured that the situation is being closely monitored and that the state electricity corporation, COPROELEC is working to restore electricity to the entirety of the national territory.

The writing team of Venezuelanalysis, currently located in Venezuela, has reported that they are currently unable to send on the ground reports until electricity is restored and encourages readers to stay tuned to our twitter: @venanalysis and facebook: Venezuelanalysis.com accounts for updates.