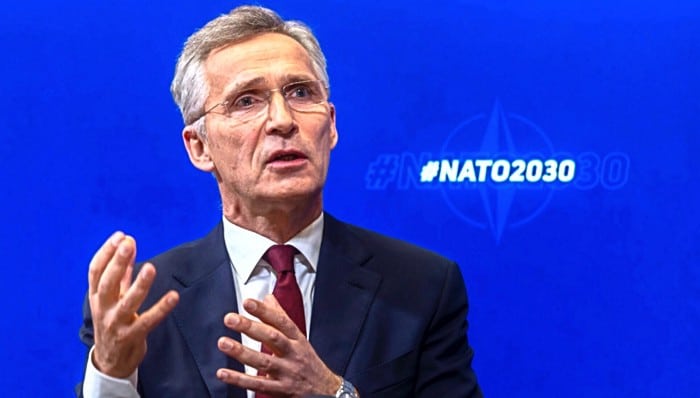 In these last four years since Donald Trump was elected, throwing the core country of the NATO empire into increased uncertainty and volatility, the ruling class within this empire has responded by trying to regain the geopolitical balance of the Obama era. Through his sabotage of international treaties, his bellicose rhetoric, and his creation of trade wars even with U.S. allies, Trump has accelerated the unraveling of the American global order while undermining Washington’s relationship with Europe. This has prompted the purveyors of the liberal order to try to repair these increasingly fragile ties within the imperialist bloc, while moving to consolidate power within the countries that the U.S. empire still firmly controls amid its decline.

The manufactured anti-Russian hysteria that’s gripped the core imperialist countries in recent years has served to rally the forces of imperial chauvinism around an agenda for renewed cold war, which is central to NATO’s goal of regaining Eurasia from the growing power of the Russia/China alliance. Military buildup against Russia and China has continued, while xenophobic paranoia about Washington’s rivals has justified ever-tightening online censorship against anti-imperialist voices. And the “Russiagate” scandal, which was recently revived through baseless media claims that Russia is paying bounties to the Taliban, has been used to pressure Trump towards going along with all of the parts of the new cold war.

But to further secure their interests going into the unstable geopolitical period of the 2020s, the imperialists need to ensure that they’ll hold thorough control over the countries within perhaps the most geopolitically important region of the current era: the Indo-Pacific. This is where NATO 2030 comes in.

In an event from this June that was sponsored by the neoconservative think tank the Atlantic Council, NATO’s General Secretary Jens Stoltenberg announced a reform project called NATO 2030. It’s a plan to absorb Australia, New Zealand, Japan, and south Korea into NATO, as well as to expand NATO’s influence beyond a mere military role and also make it a tool for influencing the wider political spheres of the countries under its jurisdiction. Stoltenberg’s explanation for this project’s existence was perfectly reflective of the recent liberal push against Trumpian nationalist isolationism: “we must resist the temptation of national solutions and we must live up to our values: freedom, democracy and the rule of law. To do this, we must stay strong militarily, be more united politically and take a broader approach globally.”

This plan isn’t just about securing imperial cooperation within the region where the U.S. is expanding its military buildup against China. It’s about trying to bypass one of the great contradictions of imperialism, which is the tendency of the imperialist powers to fight among themselves amid their quests for domination. In The Foundations of Leninism, Stalin described this dynamic as:

The contradiction among the various financial groups and imperialist Powers in their struggle for sources of raw materials, for foreign territory. Imperialism is the export of capital to the sources of raw materials, the frenzied struggle for monopolist possession of these sources, the struggle for a re-division of the already divided world, a struggle waged with particular fury by new financial groups and Powers seeking a “place in the sun” against the old groups and Powers, which cling tenaciously to what they have seized. This frenzied struggle among the various groups of capitalists is notable in that it includes as an inevitable element imperialist wars, wars for the annexation of foreign territory. This circumstance, in its turn, is notable in that it leads to the mutual weakening of the imperialists, to the weakening of the position of capitalism in general, to the acceleration of the advent of the proletarian revolution and to the practical necessity of this revolution.

The deterioration of relations that’s happened between the U.S. and Europe during the Trump era obviously isn’t an inter-imperialist war, but it does represent a modern example of this contradiction. To advance his own political interests and to help the isolationist section of the U.S. ruling class, Trump has pulled the U.S. out of the Paris climate deal, opted out of the Trans-Pacific Partnership, and started a trade fight with Europe. These recent inter-imperialist disputes over the spoils of empire have had the exact consequences that Stalin described: a mutual weakening of the American and European imperialist powers, with NATO becoming less functional and Washington’s hegemony being diminished.

The same contradiction has been at work in the case of Brexit, the campaign from the reactionary faction of Britain’s ruling class to break away from what they feel is the disempowering influence of the European Union. Like how Trump’s tariffs have damaged the U.S. economy, Brexit has damaged the U.K. economy, furthering the contractions of capitalism within the borders of these imperialist powers which have decided to go rogue. The whole cycle is a mess of capitalist contradictions getting stacked on top of each other, with the contradictions that have caused certain developments in turn leading to additional crises; the success of the Brexit vote and the election of Trump were themselves part of the societal reaction to neoliberal economic decline under late-stage capitalism.

The technocrats of the NATO empire have frantically been trying to reverse the damage, to patch up the strained imperial alliances and restore the paradigm of 20th century liberal hegemony. When Henry Kissinger talks about how important it is to “safeguard the principles of the liberal world order,” he’s talking about stopping the imperialist contradiction which Stalin described from incurably destabilizing the U.S.-centered corporatocracy.

And NATO encapsulates this desire for retaining imperial unity and control. Strategic thinkers within the global imperialist elite believe that the imperialist powers will need to cooperate in order to have a better chance of subduing the rising anti-imperialist powers. It’s why Andrés Oppenheimer, the editor of the empire-loving Miami Herald, agrees with Stoltenberg in that Trump’s ultra-nationalist strategy harms U.S. foreign policy goals. Oppenheimer and the rest of the anti-Trump neoconservative intelligentsia have thus been hoping for a Biden victory, believing Biden’s approach of international cooperation would make Washington better able to achieve regime change in Venezuela and to counter the rise of Russia and China.

But the power of Republican voter suppression, as well as the largely reactionary nature of the U.S. voting population, make me highly doubtful that they’ll succeed in ousting Trump. The capitalist contradictions of the U.S. will continue to translate into an increasingly fractured world order. The reactionary nationalism of countries like Britain will continue to result in deteriorating proletarian conditions throughout the neoliberal world, especially within the core imperialist countries. Expanding NATO to the U.S. loyalist states within the Pacific hemisphere isn’t going to undo these processes within the collapse of global capitalism, any more than it’s going to stop the trend towards a multi-polar world where China is the strongest power.

This is why the NATO technocrats aim to continue intensifying anti-Chinese and anti-Russian propaganda, tightening censorship, and making the countries they control more militarized; the heightening of the capitalist and imperialist contradictions result in a greater potential for proletarian uprising.

The imperialist reaction to the rise of the multi-polar world is bringing heavier investment in the military, and more economic isolation from Washington’s rivals. This is bringing more austerity, lowered wages, and rising prices of goods. We’re already seeing this trend become greatly pronounced in Australia, where the cold war with China is harming the industries which depend so heavily on their Chinese ties. Australia may soon become part of NATO, but this won’t stop proletarian revolution from becoming a practical necessity, both in Australia and throughout the rest of the neoliberal world.