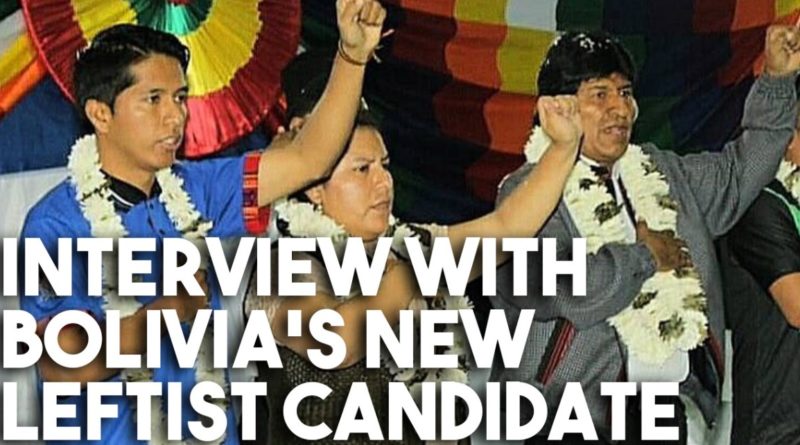 Andrónico Rodríguez could be the next president of Bolivia. The 30-year-old labor organizer speaks about the far-right US-backed coup, repression of the leftist MAS party, and how the upcoming election may be rigged.

Shinaota, Bolivia — The US-backed military coup forces that toppled Bolivia’s democratically elected government this November have not been able to break the back of the country’s left-wing resistance.

On December 18, the Movement Toward Socialism (MAS) party of deposed President Evo Morales held its largest rally since the putsch, in the town of Shinaota in the now autonomous Chapare region of Bolivia.

50,000 diehard MAS supporters descended on Shinaota’s municipal stadium to celebrate the 14th anniversary of Morales’ historic 2005 electoral victory, in which the indigenous activist defeated the right-wing presidential candidate in the first round, in a landslide that ushered in over a decade of revolutionary transformation.

Virtually everything that Bolivians have in this community — roads, schools, health centers — they credit to Evo.

But beyond paying homage to any one particular man or project, the MAS activists were here to celebrate the party’s signature “Process of Change,” a massive phase shift in the cultural and economic policies officially pursued by the Bolivian state — exactly the policies which the unelected far-right coup regime has sought to reverse, despite having no electoral or legal mandate to do so.

To discuss this political upheaval, I sat down with Andrónico Rodríguez, who had just attended a post-rally leadership meeting and is widely considered to be Morales’ successor.

At just 30 years old, Rodríguez carries himself with a weight and gravitas that few political leaders could ever muster. As the rally in Shinaota drew to a close, thousands of MAS members flocked to the stage, desperate for a chance to shake his hand or just get a glimpse of the man poised to become the new face of the rejuvenated party. (Amid the frenzy, an alarmed emcee warned attendees over the loudspeaker, “Be careful, there are children here!”)

Even pro-coup media outlets have acknowledged that Rodríguez, the magnetic leader of the union powerhouse Six Federations of the Tropics, is the most popular candidate in Bolivia’s forthcoming presidential election. Poll after poll shows Rodríguez to be leading, often by several percent. In any other country, having a consistent lead over every other contender would be a strong indicator of electoral success.

But Bolivia isn’t any other country — and MAS activists fear it may be governed for the foreseeable future by a deeply unpopular junta, which only managed to take the presidency by securing military backing and forcing the resignations of everyone else in the line of succession via kidnappings and blackmail.

I asked Andrónico Rodríguez about the steps forward, and whether or not he thinks the election will be fair. He warned that the coup regime may do anything it can to hold onto power.

The following is a lightly edited transcript of our conversation.

Transcript
Wyatt Reed: Thank you for your time, Mr. Andrónico Rodríguez. My first question is the following: How can you trust in the upcoming elections, knowing that the de facto government is currently creating bias in the Electoral Supreme Court?

Andrónico Rodríguez: Well, we’re very susceptible in the new upcoming elections because there is no guarantee for us that it can be carried out in a transparent manner. That’s why we’re not only asking for international observers, but also an electoral commission from the European Union and other bodies that are credible.

We no longer believe in the OAS. We want it to disassociate itself from this electoral process. There are international bodies that specialize in this area, and we don’t just want bodies, but also for democratically elected governments to send observers and form an electoral commission that can work with our Electoral Supreme Court to carry out the voting process.

Unfortunately, there are people who are very biased, either in favor of this government or other right-wing governments of the past, who are now in the running as possible members of the Electoral Supreme Court and in the departments.

They practically have all the state’s power, they are running all of the state’s agencies, and they are harassing and intimidating all of our legislators who are carrying out – as it should be – the selection of the members of the Electoral Supreme Court.

What we are asking for is all the conditions, all the guarantees. First, starting with our campaign manager, who is President Evo Morales – there should be no persecution or legal proceedings against him.

And we want an international electoral commission that can carry out, in a very narrow manner and with the Electoral Supreme Court, this electoral process. Otherwise it will not be possible, in any way, for us to receive guarantees that this will happen with 100 percent transparency.

With a lot of sincerity, we would like to express that the Bolivian right wing is waiting for the right moment to carry out elections. If it isn’t the right moment, they will postpone them or, if they have enough electoral members of the national and departmental courts who favor them, they will surely call for immediate elections.

There is total uncertainty for all Bolivians, primarily for the Movement Towards Socialism (MAS), over what the de facto government is trying to do with these elections.

Wyatt Reed: Speaking of the OAS, if you could do everything all over again, would you invite the OAS to monitor the elections?

Andrónico Rodríguez: We think the OAS should stay on the margins of this electoral process. They are a commission or a representative of the international body that is very biased in their political positions. They always have been, whether it’s Nicaragua, Venezuela or Argentina, which they have questioned.

Now for these gentlemen to come to Bolivia… They’d have little credibility in what they say or express to the Bolivian people. If they come, they should come as observers.

We’re going to ask, through our legislators, for an electoral commission that does not include the OAS. But we want, in a narrow way, for democratically elected governments to be part of this electoral process so that it can be transparent.

Wyatt Reed: Have you noticed any interference by the U.S. government in Bolivia?

Andrónico Rodríguez: Yes, it’s very evident. When the president resigned, the first to applaud this and make public statements were the presidents of the United States and Brazil.

Now the president of the United States has congratulated Mrs. [Jeanine] Añez. It’s clear proof that they have been behind all of this.

The worst part is that Mr. [Luis] Almagro [head of the OAS] shamelessly congratulated the civic committees and this government for having recovered democracy. What democracy? So many dead people. So many siblings dead, arrested, injured, persecuted.

There’s a very selective persecution. They commit crimes and nobody says anything. There are paramilitaries in Cochabamba who are all over the place, harassing citizens, but they’re ‘defenders’ of the citizenry. And when we say something against the government, we’re ‘seditious’ or ‘terrorists.’

So what democracy did they recover? That’s why we are very indifferent towards the secretary general of the OAS, as well as towards the president of the United States who applauds and welcomes this de facto government.

Wyatt Reed: What are the next steps for the party, social movements and the Bolivian people?

Andrónico Rodríguez: The goal for Bolivian social movements is that they have to grow in strength, because in 2005 we began building a new state, a plurinational state. Now more than ever, democracy has been widened, there is substantial participation by all Bolivians – whether we’re Quechuas, Aymaras, Guaranís, from all nations and cultures. This can’t be truncated in any way.

That’s why social movements are more resolved than ever, because all of us, absolutely all of us, consider ourselves to be Evo Morales. That is to say, in our minds and hearts are the legacy, the teachings, the wisdom that the president left us with great responsibility.

He is still with us, and that is why the cause we have fought for, our patriotic program, is still ongoing. What we are doing now is having meeting after meeting, wide-ranging rallies, with the sole objective of strengthening and uniting social movements.

Now our task is to consolidate the committed vote, the party vote, regardless of who the candidate is. The good thing, and in contrast to the right wing, is that the Movement Towards Socialism has its own voters.

The right wing, like athletes, finish a season and then go out in search of team that will give them a better deal. Lots of candidates now don’t have parties. They’re looking at what parties can offer them. Unfortunately, they don’t have a vision for the country; they don’t have a plan; they have no leadership; but they are united against the leadership of an indigenous campesino who has brought great changes to Bolivia.

That is why the next step is to consolidate our committed vote, our party vote, and after having the electoral schedule, we will, with great responsibility, elect our candidates for the presidency and vice presidency, as well as deputies and senators.

But this will come in accordance with the timeline set by the Electoral Supreme Court. I repeat, if there are conditions and guarantees, we will go to the elections. If not, with all sincerity, this will have to be evaluated at the national level with social movements.

We will see how we can rectify the situation, which is not good at all at this time, with arrests, paramilitaries that are harassing people, and no rule of law right now in our country. That is exactly why we want all the guarantees to carry out this electoral process.