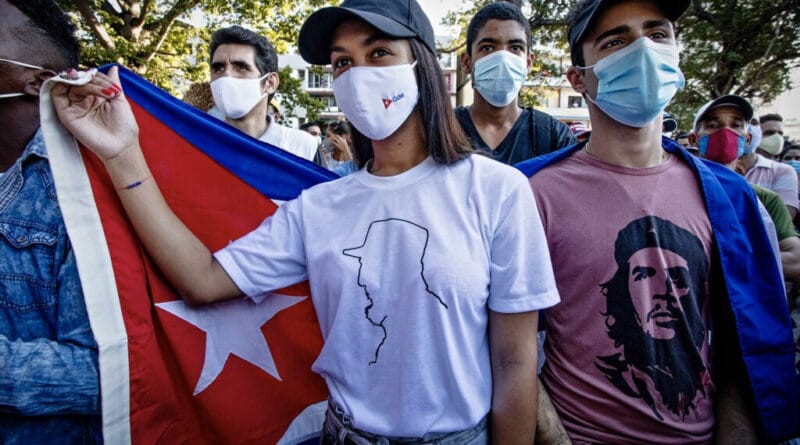 Young Cuban artists, intellectuals and university students made a call through their networks to be at Trillo Park in the Cuban capital for a concert Sunday, at four o’clock in the central Trillo Park for the deepening of socialist democracy and it defense of the Revolution

The concert took place at a time when the people on the island are denouncing a campaign of media manipulation against Cuba, as part of the script from a low blow with fueled by US funding to subversive groups such as the so-called San Isidro Movement. This “movement has the full support of the US government and the Miami right wing including a social media campaign “demanding” the release of Denis Solis, sentenced to eight months in prison for the crime of contempt for the authorities.

Authorities in the nation showed that Solis, who is presented by the networks as a censored artist, admitted in a video that he maintains links with people who finance violent acts against Cuba.

In an interview to the Cuban television, the intellectual Enrique Ubieta said that the name of movement is a pre requisite of these right wing media outlets to give the idea that something structured exists and to establish a political perspective. The trial and conviction of Solís is not relevant to be international news, rather it is a pretext, and behind it is the intention to build a focus that makes these people (those on strike) visible, to project an image of supposed repression in Cuba.

Once again this backfired as big spontaneous crowd gathered to support Revolutionary Cuba.”We came here because socialism opens up a universe of justice to us that is greater than that proposed by those who wish to destroy it,” Karla Santana Rodríguez, President of the Federation of University Students (FEU), of the University of Havana said loudly to those young people who sang slogans to the catchy rhythm of trova sounds.

It was an afternoon of emotions, reunions, determination, music and above all, a lot of love. No one thought beforehand that Cuban President Miguel Díaz-Canel would appear there.  But to the joy, surprise, emotion and a standing ovation he was welcomed when he arrived. “Although I have gray hair I have the right to be here with the youth,” said the Cuban President with his proverbial simplicity.

Díaz-Canel, who knows Silvio Rodriguez’s song by heart, sang along with the troubadours, young people and students, the verses of a song which says

I live in a free country

Which can only be free

On this earth, at this moment

And I’m happy because I’m a giant…

Díaz-Canel said “I am here with the young people of my country.  “The emotion couldn’t be contained in my chest and I had to come here. Some advised me not to come so that the spontaneity of this demonstration would not be manipulated,” said the president.

RELATED CONTENT: Western Union Ceases Operations in Cuba Due to Hostility From the US Government

To which he added, you know how much they have wanted to set us up. And that surely will be repeated, because the plans against the Revolution continue.

“They thought they could destroy the Revolution before the end of the Trump administration, but they will have to continue with that plan,” he said before hundreds of young people who listened attentively.

He emphasizing the importance of “dialogue to improve and perfect socialism.”

These were “desires to make and continue building the Revolution from within the Revolution,” of which Karla spoke energetically and emotionally. Those same desires that mobilized hundreds of young Cubans this afternoon and that will continue to mobilize them on the road to deepening the conquests of all these years.”

The people said: “We are with you Diaz Canel..”

And he answered: “I am with you; I had to be here, with the young people of my country”

And everyone repeated a chorus:  “We will be here Díaz Canel for whatever you need.