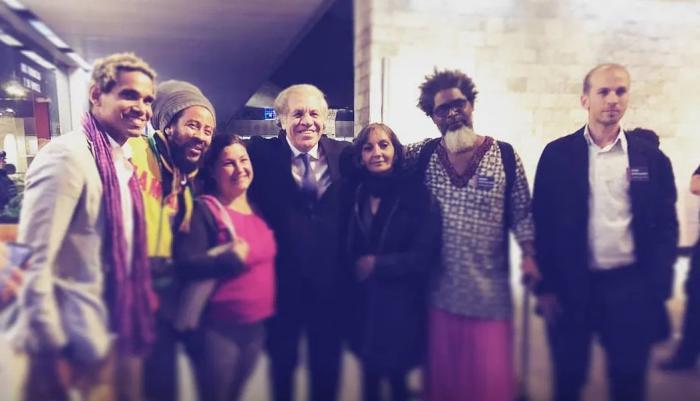 Since the end of the 19th century, the San Isidro neighborhood in Old Havana was considered a “tolerance zone,” until 1959, when life changed with the triumph of the Revolution.

It was a neighborhood of humble people, harassed by the presence of Yankee Marines who came ashore in search of fun and cheap sex. Once the butt of jokes, San Isidro now has 14 family doctors’ offices, a traditional medicine clinic, a veterinary clinic, three child care centers, a kindergarten and four schools.

I had the opportunity to interact with residents, during a neighborhood discussion organized by the local Committee for the Defense of the Revolution (CDR) about two years ago, a tribute to honor Comandante en Jefe, Fidel Castro Ruz.

We met, without a stage, no prepared speeches, beneath a kapok tree in a park. I remember two comments made, one in which, on behalf of all present, a resident declared his unconditional support for the Revolution, based on his religious faith.

The other was that of an old man, who called on his fellow citizens to remember what that place was like before 1959 and how many of them, as children, knew of cases of women who were abused by the Yankee Marines.

Personal stories of social transformation like these do not constitute important news for transnational media and virtual networks that these days have fixed their sights on this densely populated neighborhood.

Daily life in this neighborhood has been altered by a small group of people – 14 in total, four of them members of the so-called San Isidro Movement – who have become the center of a new counter-revolutionary show, sponsored and supported by the U.S. government.

The show is very similar to those staged on other occasions by other mercenary groups and puppets in the service of the U.S. government. Let us not forget the notorious, ridiculous fake “avocado strike,” in which its promoter was caught enjoying a delicious menu.

Not all of the actors in the performance play the same role: Some say they are on a food and water deprivation strike, others say they are on a hunger strike, and several say they are “guaracheando,” as can be seen in live transmissions, a kind of reality show members of the “movement” post on social media, for the purpose of self-promotion which also serves to report on their “work” to those who finance them.

The group, for the moment, has two demands. The first is the release of Denis Solís González, presented as a young censored artist, who they allege went missing after being detained by the police.

Denis Solís is currently serving an eight-month prison sentence for criminal contempt of authorities. He has not appealed the verdict.

The Cuban Rap Agency, an internationally recognized cultural institution, exposed the crude argument that the manipulators use regarding their relationship with the art form: “The voice of a beginner without a consolidated body of work cannot be invoked as representative of our hip hop, much less when it is known that the interests he defends are part of an orchestrated subversive plan against the Cuban Revolution.”

The nature of the plot became apparent in short order, clarified by Solís himself, who, in a video broadcast on social media, admitted having ties with individuals who have financed violent acts against Cuba, as is the case of José Luis Fernández Figueras, accused by the Cuban justice system of being part of a terrorist group based in Miami, who promised to send Solís $200 if he complied with his instructions.

WHAT IS THE SO-CALLED SAN ISIDRO MOVEMENT?

The fabricated San Isidro Movement, the center of a media boom orchestrated by an articulated network of media at the service of U.S. interests, in no way represents the humble, hard-working, revolutionary neighborhood from which they have taken their name and which repudiates the presence of people who live off scandal, commit degrading acts and even manipulate minors to participate in their crude, provocative performances.

Luis Manuel Otero Alcántara, who is identified as the leader of the group, has an extensive record of provocations, trained and supported by Mara Tekach, when she was in the chargé de affaires at the U.S. Embassy in Havana. Congressmen who have promoted the tightening of the genocidal blockade against the Cuban people are among the politicians he admires.

Evident in the reality shows they mount are the existential and cultural degradation of the group, as well as their ties to Miami terrorists who have carried out violent actions against our country.

In one of their live broadcasts, a member of the alleged Movement greeted terrorist William González Cabrera, who is responsible for financing attacks on facilities and establishments in Cuba, like those involving setting fires in a cafeteria, a barbershop and a neighborhood store. Another member of the group asked about actions to be carried out with Molotov cocktails.

While the script unfolded focusing on solidarity with Denis Solis, his “brothers” in the cause could be seen celebrating in a video posted on social media, showing an attitude that contrasted sharply with the talk of “martyrdom” they had promoted just hours earlier.

RELATED CONTENT: New Campaign of Destabilization Brings Out Hundreds in Support of the Cuban Revolution

The second demand that they invented, as a pretext to gain popularity with their provocative efforts, is the elimination of the stores in freely convertible currency (MLC) a measure made necessary by the Trump administration’s intensification of economic persecution and the blockade, aggravated by the COVID-19 pandemic.

The same individuals who are making this demand are buying food imported from abroad in these stores through an online platform, regardless of the hunger and thirst strike they claim to support.

WHO IS PULLING THE STRINGS?

The new show, orchestrated from Washington and Miami, is part of plans for subversion against Cuba, and has precedents in other similar actions organized, executed and financed by that government with the goal of destroying the Revolution.

If we analyze the modus operandi of the so-called San Isidro Movement, being implemented are many of standard tactics used in the “soft coup” strategy outlined in the manual by U.S. political scientist Gene Sharp, with striking similarities to plans executed in the Ukrainian Maidán, Venezuela’s street barricade “guarimbas” and actions by groups of delinquents during the coup d’état against Evo Morales in Bolivia.

Easily observed is the tendency to recruit thugs and individuals of low moral standing who lend themselves to serve as agents of a foreign government, promoting chaos and feeding the narrative of violence and repression in Cuba, disseminated by a well financed and articulated network of digital and traditional media.

U.S. government officials have made no secret of their complicity with the events in Havana, a fact that contrasts with our government’s position of not interfering in the internal affairs of other countries.

Michael Kozak, acting undersecretary of the U.S. State Department’s Bureau of Western Hemisphere Affairs, a fervent promoter of the blockade and the end of remittances, has made several statements of support for the San Isidro Movement, as has Florida Republican Senator Marco Rubio, whose anti-Cuban record is well known to our people. Luis Almagro, secretary general of the discredited OAS, could not miss the opportunity to chime in and express his support for the latest anti-Cuban action.

U.S. officials, anti-Cuban Congress members and the OAS Secretary General are not interested in the effect on health that their irresponsible attitude could have on some of those involved. What they seek at all costs is to discredit the exemplary record of the Revolution, recently recognized by the election of Cuba as a member of the UN Human Rights Council, and garner support for the U.S. government’s justifications to maintain the genocidal blockade that affects our entire people.

This provocative action, responding to strings pulled in Washington and Miami, is intended to negate the rich history of the Revolution, which includes no precedent for giving into pressure from the empire, or a handful of posers. In January 1959, the Cuban people learned the value of independence, sovereignty and devotion to the full dignity of man. We are not willing to renounce these conquests that have cost so much glorious blood.