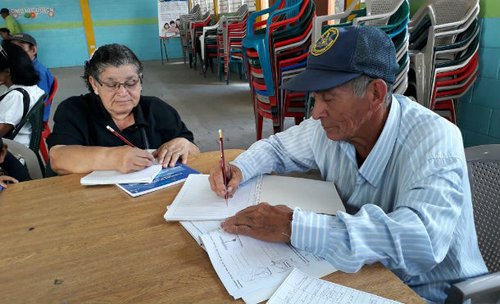 Almost 700,000 Nicaraguans have become literate in the last ten years, as part of the continuation of the National Literacy Crusade (CNA) of the 1980s, Omar Cortedano, director of Literacy at the Ministry of Education, reported on Monday.

The Nicaraguan official mentioned that the National Literacy Campaign “From Marti to Fidel” between 2007 and 2009 reduced the percentage of people who could not read or write to less than 5%, and subsequently the work continued until 2019, taking care of almost 700 thousand Nicaraguans, most of them workers from rural sectors.

“57% are from rural areas and the fundamental part is continuity, because it is not enough to only learn to read or write,” said Cortedano.

Cortedano recalled that the National Literacy Program has its origins in General Sandino’s commitments and later in the foundations of the FSLN.

“In the FSLN statutes, education appears as a main issue. Before the triumph of July 19, 1979, the gestation of this crusade began, but once the FSLN came to power, everything began to be promoted. They freed us not only from Somoza, but from the slave-owning tools of domination, including compulsory ignorance.”

He recalled that in March 1980, the people called and mobilized to participate in the National Literacy Crusade. “That is, the people making the people literate”, he said.

He specified that 60,000 young people were mobilized, who for five months lived in rural areas of the country to teach reading and writing to more than half of the poor and illiterate population of Nicaragua.

With that large-scale effort, the illiteracy rate fell in five months from 50 percent to 12 percent.

The National Literacy Crusade, which culminated on August 23, 1980, is the greatest educational and cultural feat in the history of Nicaragua. It was a vital experience for the youth of the cities, who while teaching the population to read discovered the other half of the country, with the consequences of poverty and abandonment left by fifty years of dictatorship.

They create programs for continuing education

Cortedano said that the government and our people did not settle for only the basic knowledge of reading and writing. Programs were created for continuity that today shine in their greatest splendor.

“These are projects aimed primarily at adults and youth from the countryside. Until 2020 we have a complete literacy, primary, secondary cycle and we complement with work orientation and productivity to enable young people in entrepreneurship and jobs to learn a trade.”

To date, more than 78 thousand have passed the primary for youth and adults. Thus, their work capacities are strengthened and they incorporate the use of technology.

He said that to commemorate this date, meetings have been organized in all municipalities with solidarity teachers to recognize their work and a virtual exchange with teachers who participated in the Crusade and many today fill the classrooms with knowledge.

In addition, a virtual forum is organized with international exhibitors on the experience of youth and adult literacy. As well as activities in the communities themselves to deliver recognition and conduct tours of the exhibitions of National Literacy Crusade’s memorabilia.