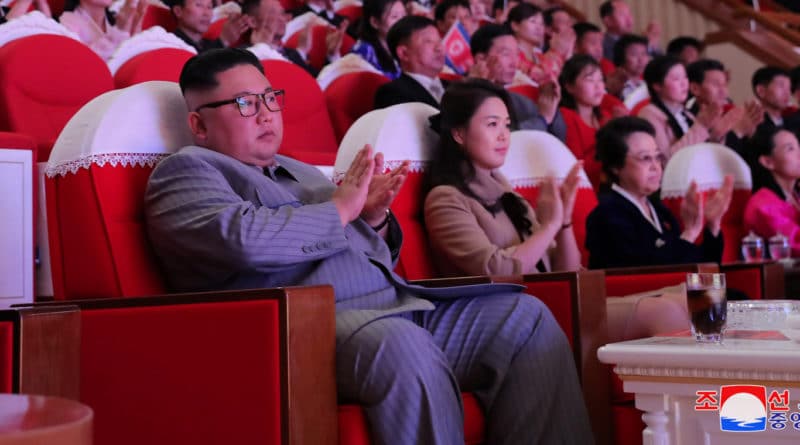 There was, as there usually is when it comes to coverage of North Korea, little self-reflection as to how and why the media had reported fake news for six years.

It’s well past Halloween, but people in the Democratic People’s Republic of Korea are rising from the dead (again). That is according to our media, who have for six years been claiming Kim Kyong-hui, the aunt of current ruler Kim Jong-un and daughter of the father of the nation Kim Il-sung, was dead, only for her to be spotted beside her nephew enjoying the Lunar New Year festivities in Pyongyang at the weekend.

CNN and the Daily Telegraph both reported that Kim Jong-un had her poisoned in 2014. Or perhaps she died of a stroke? Or was it a heart attack? Or was she in a permanent vegetative state? The media couldn’t decide, yet they all agreed she was definitely gone. The press appeared unsurprised by the government’s apparent ability with necromancy, covering her reappearance merely as an “isn’t this crazy” story, merely “a reminder of how weird and brutal North Korea is” (BBC). While that statement might be accurate (Kyong-hui’s husband, a top official, was executed by the state, after all), across the media, there was little self-reflection at all as to how and why they had been reporting fake news for six years.

This is hardly the first time that the press has breathlessly reported that members of the DPRK’s elite have been killed, only for their untimely reappearance to spoil the narrative. Last year corporate media claimed that Korean negotiators were executed for failing to achieve a deal with the U.S. at the nuclear disarmament summit in Vietnam, something CNBC called part of a “massive purge to divert attention away from internal turmoil and discontent.” But barely a few days after the media deluge, the negotiating team’s leader appeared at a performance alongside Kim Jong-un.

In 2013, it was widely reported that Hyon Song-wol, a popular musician and reputed love interest of the DPRK’s supreme leader was executed in a “hail of machine gun fire while members of her orchestra looked on” (BBC). Unfortunately for this narrative, Song-wol is very much alive and singing, continuing to publicly perform to this day. And there is a cavalcade of military officials the corporate press has insisted were killed, often in comically over-the-top ways who turn up later seemingly unharmed. For example, in 2018 General Ri Yong-gil, the officer Donald Trump awkwardly saluted, was promoted to Chief of General Staff, this, despite having been “executed” in 2016 as part of a “brutal consolidation of power,” according to CNN.

Another North Korean figure rising from the dead is national soccer coach Yun Jong-su. After the country lost 7-0 to Portugal at the 2010 World Cup, media reported that he had been shot. This narrative was only dropped after a journalist ran into him at an airport. Ten years later, not only is Jong-su alive, but he is still the national team’s coach.

The problem with these stories is that they largely emanate from one source: notorious conservative South Korean daily the Chosun Ilbo, which has a long and detailed history of printing lurid fake news. Yet Western press are dependent on the Chosun Ilbo for much of their reporting. As Business Insider said while falsely reporting that Kim Kyong-hui, aunt of Kim Jong-un was dead, “the Chosun Ilbo is generally considered a reliable source.”

Other stories are based on testimonies from defectors, who are paid in cash for their stories, something that the poor, isolated and jobless dissidents themselves complain gives them a perverse incentive to exaggerate. The saying, in journalism, goes: “if it bleeds it leads,” i.e. the more shocking a story is, the more likely it is to be published, meaning that defectors who do not offer the sordid details journalists, intelligence agencies or human rights groups want, will not be paid. Defectors are not necessarily trustworthy sources either. One Korean defector who was praised for his heroic actions later admitted that he was actually on the run for a murder he confessed he committed.

The perverse incentive also exists for media, too, who live in a hyper-competitive world driven by the need to get clicks. Careful, nuanced analysis does not pay. Added to that is the fact that the DPRK is an official enemy of the United States. The United States killed up to one quarter of the Korean race in bombing during the 1950s, using chemical weapons against them and committing other war crimes such as bombing civilian targets. Media analyst Adam Johnson put forward his theory of the “North Korea law of journalism,” where, he says, “editorial standards are inversely proportional to a country’s enemy status.” While the U.S. or friendly countries are covered favorably, the most lurid fantasies can be printed with regards to enemy states like Venezuela, Bolivia or the DPRK, as there is no penalty for being incorrect. Publishing stories claiming Donald Trump had thrown General Michael Flynn into a tank of ravenous piranhas would result in outlets being shut down, re-ranked and delisted by search engines and social media, and perhaps even journalists being arrested. But the same story run about North Korea is a money-spinner.

Thus, the same orientalist tropes are used again and again when it comes to reporting on Korea – that there is only one haircut allowed, that it has “banned sarcasm,” that there is no electricity or tall buildings in the country– are endlessly repeated by journalists reproducing imperial propaganda. As Kim Kyong-hui’s case shows, in North Korea, stories are often too bad to be true.