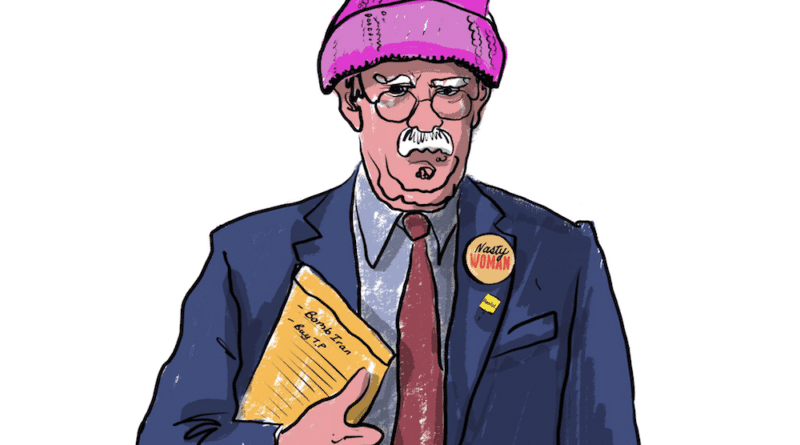 Liberals should definitely get their hopes up very, very high that John Bolton is going to provide the information needed to bring down the Trump administration and restore order to the universe. Definitely put all your eggs in that basket and invest all of your emotions in it.
~
Friendly reminder that you aren’t actually required to care about the impeachment show or have any opinions about it whatsoever.
~
The difference between the totalitarianism of dictatorships and the inverted totalitarianism of “free” societies is that in totalitarianism they allow one ideology which supports the status quo, while inverted totalitarianism allows two ideologies which support the status quo.
~
Mike Pompeo lies so reliably and so significantly that in a very real way you would gain a more accurate picture of reality by believing the exact opposite of all his public statements than you would by believing them.

RELATED CONTENT: Trump: A War for Reelection
~
The establishment which runs the empire is not afraid of Trump, and it is not afraid of Bernie. It’s afraid of you. They can handle one man in the White House who is less than ideal. What they absolutely cannot handle is ordinary people using their numbers to effect real change.
~
The Bulletin of the Atomic Scientists has moved the Doomsday Clock to 100 seconds to midnight, largely due to senseless recent escalations between the US and Russia. But hey, nuclear armageddon is a small price to pay if we get to retaliate for even a single one of those $46,000 worth of Russian Facebook memes.
~
Fixing the world’s problems and fixing your own inner dysfunction are inseparably unified objectives. It’s okay to emphasize one more than the other at different stages in your life, but valuing one without valuing the other is a contradictory, intellectually dishonest position.
~
Some people who learn a bit about what’s really going on in the world start believing society’s problems are being driven by otherworldly forces like reptilians or Satanism because it’s more comfortable than grappling with the reality that our ills are very, very, very human.
~
Reading The New York Times to learn about what’s happening in the world is like reading Calvin and Hobbes to learn about tigers.
~
Step 1: Launch vicious smear against Sanders.
Step 2: Shout “DON’T FIGHT! WE NEED TO STICK TOGETHER! DO YOU WANT TRUMP TO WIN???” at anyone who objects.
Step 3: Repeat steps 1–3 until Sanders is neutralized.
~
The 2016 Democratic presidential primary was rigged. It was useful not because it offered any real opportunity to elect a good candidate, but because trying to do so and watching what happened woke people up to establishment corruption. The same will be true of the 2020 primary.
If you don’t push against the will of the establishment manipulators, you’ll never force them to expose themselves. Let them install Biden/Warren/Buttigeig without opposition and they won’t be forced to sabotage democracy. Force them to provide proof of their own corruption.

This is not to say Americans shouldn’t try to nominate a true progressive candidate; it’s to say that they should. Try very, very hard to nominate your favorite candidate. Try your very hardest. And then, watch what happens. Watch what they do to you. And never, ever forget.
~
If you’re a grown adult making an angsty public spectacle about receiving angry online comments from supporters of a politician you just smeared, you should feel ashamed of yourself. If you’re a professional news reporter doing the same, you should immediately change careers.
~
Hillary Clinton has become another David Duke. In the same way being “endorsed” by Duke gets a progressive politician cancelled, being attacked by Hillary gives them a boost.
~
Biden debating Trump would look like a geriatric squirrel with glaucoma fighting a rabid wolverine.
~
Every single day I get extreme vitriol directed at me for expressing skepticism of The Official Narrative Of The Day. This vitriol never causes me the slightest flicker of self-doubt, because I distinctly remember seeing the exact same vitriol in the lead-up to the Iraq invasion.
~
The existence of some opposition to the Iranian government within Iran doesn’t legitimize attempts to foment civil war there. There were grassroots elements to US-sponsored uprisings in Libya, Syria and Ukraine too, but they wouldn’t have occurred without western interventionism.
~
Don’t babble about the need to “support” anti-government protesters in unabsorbed nations. “Support” is too conveniently vague. Specify what you want them to receive. Weapons? Money? Retweets? Prayers? At the very least be forthright and honest about what it is you’re advocating.
~
“Trump doesn’t want war! He’s just using sanctions and CIA ops to encourage the Iranian people to rise up and oust the regime!”
“Yeah that’s civil war. That’s the thing that civil war is.”
“Well okay but the people doing it will look different from me so it doesn’t count.”
~
Trump supporters are George W Bush supporters LARPing as Ron Paul supporters.
~
The many have been propagandized into supporting the interests of the few. But it’s worse than that: the many have also been propagandized into believing that those few among them who advocate for the interests of the many are the real enemy. This whole dynamic must reverse.