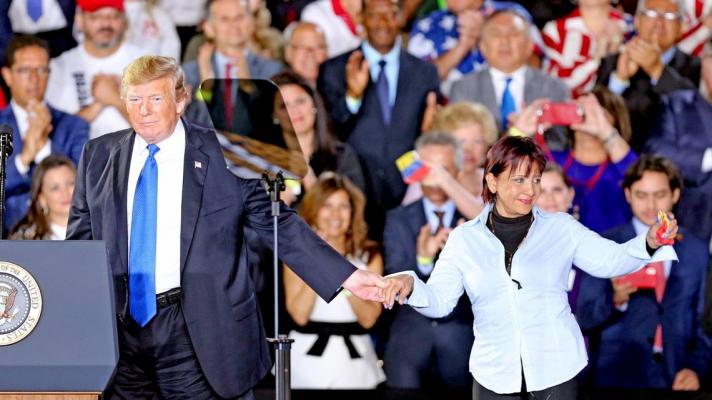 A report by El Nuevo Herald gave an account of the state of terrorist Óscar Pérez’s mother in the city of Miami, Florida. Her name is Aminta Pérez, and according to the right-wing US newspaper “she is on the verge of destitution. Barely coping with the aftermath of a heart attack and the appearance of cancer, without achieving stability, today she sleeps in a shelter in Homestead after a long pilgrimage throughout the United States.”

“I’ve never had a place to stay,” Aminta said in the interview. “I go from house to house, with people I met on social media networks.” But her stay in these homes has generally been very short, and people have been unable to provide shelter for her for more than a few days at a time.

Aminta Pérez arrived illegally in the United States in 2018 with her family and was received by immigration officials, who kept her in prison for several weeks until she was granted parole. Since then she has been in an dire financial situation, and suffering from health issues.

In February 2019, she was invited to an event at Florida International University where she appeared alongside disgraced former president Donald Trump to ask for “humanitarian aid” to be sent to Venezuela, when a narrative was being constructed to promote the USAID campaign to invade Venezuelan from Colombia. The propaganda was part of an effort by Trump to earn the conservative vote of Cubans and Venezuelans in the South of Florida, something he did manage to capitalize on during the 2020 presidential race.

Miami-based El Nuevo Herald reported that “after the electoral event with Trump, Aminta felt hopeful that she would receive help from the interim government of Juan Guaidó, who went on to administer part of the United States’ humanitarian aid to the Venezuelan population.” But no one helped her, despite the fact that for the extremist sectors of anti-Chavismo Óscar Pérez—whose armed terrorist cell was neutralized at the end of 2018 by Venezuelan law enforcement agencies—is considered a martyr. The most extremist anti-Chavismo elements continue to present him as a hero in their campaign against the Bolivarian Revolution.

“Aminta said that at one point she had asked Guaidó for help directly, but that the opposition leader informed her that he could not do much for her,” wrote the gringo newspaper.

An international analyst consulted by Orinoco Tribune on this issue said that “El Nuevo Herald is part of the chorus of US mainstream media that only follow Washington’s narrative against President Maduro and Chavismo, and this coverage does not signal a change in the hard line it takes against Chavista Venezuela, but is an attack against Donald Trump to undermine his presidential aspirations for 2022.”

Óscar Pérez’s mother herself claims to have been deceived by the anti-Chavista leaders in the United States, as well as millions of Venezuelans, by the alleged “humanitarian aid.”

Who is Óscar Pérez
On June 27, 2017, Óscar Pérez used his status as an inspector assigned to the Air Transport Division of the CICPC police agency (Scientific, Penal, and Criminal Investigation Service Corps) to steal a helicopter from the agency and, from there, execute an armed attack against the headquarters of the Supreme Court of Justice (TSJ) and the Ministry for Interior Relations, Justice and Peace in Caracas. He and his companions fired 15 shots at the Ministry headquarters where a party was being held to mark the Day of the Journalist, and then four grenades were thrown at the TSJ, which housed a school that, fortunately, had already been vacated.

On January 15, 2018, Óscar Pérez and his terrorist group were surrounded in a house in El Junquito, west of Caracas. While negotiating the conditions for their surrender “they opened fire on the officials in charge of the negotiation and tried to detonate a vehicle loaded with explosives, with the unfortunate result that two officials of the Bolivarian National Police (PNB) were killed and five seriously injured,” said a statement from the Ministry of Internal Relations.

“Our troops were attacked by these violent people while the conditions for their surrender and safekeeping were being negotiated,” read the statement. “The members of this terrorist cell that carried out armed resistance were killed, and five criminals were captured and detained.” Among the deceased was Óscar Pérez himself.